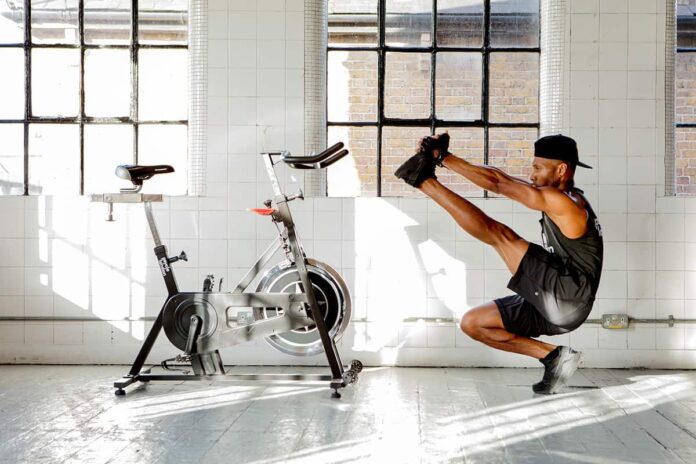 More than a decade after the success of New York spin class SoulCycle sparked copycat studios on this side of the pond, indoor cycling is still riding high on the Capital’s boutique fitness scene.

Slick facilities, thumping sound systems, energetic choreography, and top-of-the-range tech has elevated the humble spin class from a monotonous pedal to nowhere to a full-body workout that is fast, furious and, most importantly, bags of fun.

But with so many gyms and dedicated spin studios in the City, it can be hard to find your ride tribe. Check out our guide to the best spin classes in the Square Mile.

“We don’t spin, we ride”. The cult-like tagline used to describe 1Rebel’s signature Ride class and its army of devout followers (or ‘Rebels’) might prompt eye rolls from outsiders, but there’s something about this studio that manages to hook even its toughest critics.

It could be the space; concrete and shiny industrial copper fittings create the vibe of a nightclub rather than a health club, complete with impossibly good looking people on the door and prosecco behind the bar (pouring free on Friday evenings).

Or maybe it’s the bathrooms; hands down the best of any City gym (and many homes and offices) with chilled towels, heated bench seating and vanity mirrors straight from a film set so you can primp and preen like the star you are. There is even in-house hair stylist Barber & Blow for those times you need to zip from bike to bar.

It’s all impossibly luxe and would err on the side of gimmicky were it not for the gruelling spin class to top tracks mixed weekly by 1Rebel’s DJs. Ride is full of fast-paced bouncing sprints and slow resistance-filled climbs interspersed with pushups and curls with dumbbells.

Riders control their own resistance so classes are fine for beginners, but themed rides like ‘Battle of the Sexes’ and live music sets are perfect for pushing you to take it up a couple of notches. Consider us converted.

Best for: Anybody that appreciates the finer things in a workout, like chilled towels.

Studio tip: Mix it up with 1Rebel’s other workouts, Reshape (a HIIT and treadmill class) and Rumble (boxing). A DoubleShot delivers 30 minutes of either Reshape or Rumble then 30 minutes of Ride for the ultimate sweat sesh.

More nightclub vibes at Soho-born spin brand Psycle, which cycled across to Shoreditch in July last year, launching barre, HIIT and yoga classes along the way to offer a “360-degree approach to health and fitness”.

Ride remains its core offering with around 50 classes per week in the 44-bike subterranean studio that seems to vibrate with energy once the bass-heavy music and neon strobe lights kick in.

A well-choreographed combination of standing climbs and sprints hovering an inch above the bike means your backside will barely touch the seat throughout the class, and any sitting usually means you’re curling or pressing one, two or (if you’re particularly masochistic) three-kilogram dumbbells.

The flashy lights are switched off for one track towards the end where riders are instructed to lose themselves in the music and give it their all under the cover of darkness. “This is the only time I will tell you to ignore the beat,” the instructor bellows. “Just GO.”

It works; your legs have never pedaled faster.

Best for: A super-slick ride among beautiful people.

Studio tip: Bathroom facilities have the full complement of posh products, but a packed programme will have those slow to dismount their bikes queuing for the showers during morning peak.

The range of classes on offer at Gymbox’s four City studios would rival that of your average first year university course catalogue, but Bikes and Beats remains one of its stalwarts.

You’ll find fewer frills and closer quarters here than at some of the other cycle-dedicated facilities, but the same basic principles: a high-octane spinning sweat fest to a banging pop/house music soundtrack – Bikes and Beats, capisce?

Bikes are equipped with monitors that measure your RPM and calories burned based on your height, weight and fitness level input at the beginning of the class.

Monitors on the front of the bike change colour depending on how much effort you’re putting in so the instructors can see if you’re slacking off, as can your neighbours with the results displayed on a leaderboard at the front of the class. Achieve red-zone status and be rewarded with a little ring of fire on the board; you’ll be chasing it all the way to the finish line.

Tech aside, the ride itself is a total sweatfest of alternating sprints and hillclimbs that caters to Gymbox’s cohort of serious gym bunnies. First-timers might feel a little left behind with quick changes and absolutely zero rest periods but it’s one of the toughest workouts of the bunch and will deliver serious results.

Best for: An intense ride to bring out your competitive side.

Studio tip: For a change of pace, check out Gymbox’s spin alternative Euphoria, “packed with high cadence training, heavy climbs, visualisation and hypnotic beats.” Basically a 4am rave in a 6pm spin class.

How much? Monthly membership packages vary by studio.

The boutique brand that spearheaded the spin revolution here in the Capital, Boom Cycle founders Hilary and Rob Rowland opened their first studio in Holborn way back in 2011 when we were all still shaking our money makers in Zumba class.

Seven years and three more studios later, Boom remains a perennial favourite among spin junkies who like high-energy rides with tunes to match.

Music choice varies with instructors, but beat is king at Boom, so expect tempo-timed surge sprints, handlebar push-ups, tap-backs, slowing only slightly for the killer hill climbs where you will be urged to up the resistance again and again.

Dumbbells stashed below the bike seat come out on multiple tracks, ensuring a full body workout with bicep curls, shoulder presses and tricep kick-backs as you pedal. It can be a fair bit to co-ordinate but the classes are candlelit so nobody is watching and the vibe is very much “party on a bike”. As long as you can holler and high-five on request, you’ll fit right in.

Studio tip: Boom has just broken into the City centre with a brand new studio at Monument. Bag yourself a bike before everybody else finds out about it.

For cycling traditionalists who get their bike shorts in a twist over the idea of punching out a couple of tracks with a pair of pink hand weights there is Digme, an innovative operation that has got your workout down to a fine science.

Top-of-the-line Keiser M3i bikes feed stats into screens at the front of the studio, creating a virtual race between riders in what appears to be a gamer’s version of the French Alps mountain range.

The bikes track your stats and position your cycling avatar at the front, middle or back of the pack depending on your level of exertion, displaying results intermittently on a leaderboard so you can duke it out with your neighbour.  Data for each ride is then recorded to an online account so you can track your progress.

Performance classes are geared towards those wanting to improve their cycling technique, while Beat is all about zoning out to the rhythm of some seriously good house tracks.

Best for: Anybody who has ever imagined themselves taking on Le Tour.

Studio tip: Digme Blackfriars also offers HIIT class Matrix, while Moorgate shares its facility with top barre studio Barrecore, so you can strengthen and lengthen those saddlesore muscles in one hit if you so fancy.