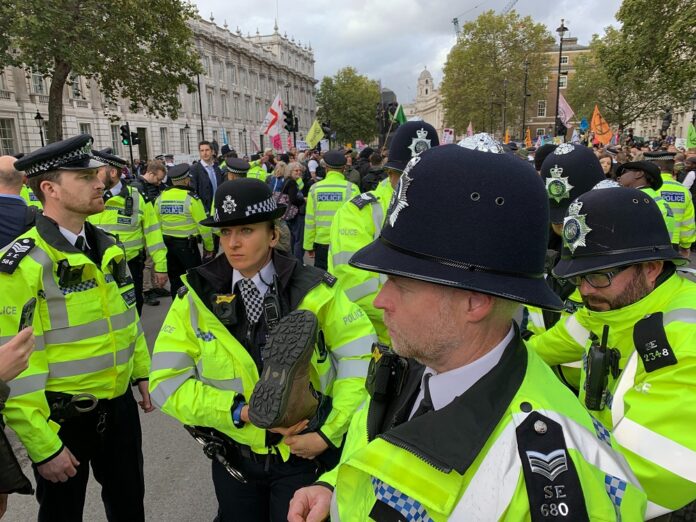 Public trust and confidence in the Metropolitan Police Service has hit an all time low, according to the latest figures from City Hall.

The Mayor’s Office for Policing and Crime (MOPAC), headed up by Sadiq Khan, surveys Londoners about their perceptions of the police and publishes the results quarterly.

The latest figures, which cover the period until March 2022, show just 57 percent of Londoners believe the Met can be relied upon to be there when needed – down from 59 per cent in the previous quarter.

On average, 62 percent of Londoners agreed the Met treats everyone fairly – down from 64 per cent.

Both measures represent record lows for public perceptions of the Met, down from 77 percent and 74 percent respectively in 2014 when the figures were first published.

Scotland Yard has been rocked by “a series of devastating scandals” in the past 18 months including the murder of Sarah Everard by a then-serving Met officer, details of racist and misogynist attitudes among officers, and the arrests of several officers for offences ranging from misconduct to rape.

Those scandals and the subsequent fall in confidence in the Met led to a public falling out between Mayor of London Sadiq Khan and former Met Commissioner Cressida Dick, who resigned in March.

A spokesperson for Mr Khan said he is working with Home Secretary Priti Patel to appoint a new commissioner who “understands the depths of the cultural issues facing the Met and has a plan to restore the trust and confidence of Londoners in the service”.

The mayor’s spokesperson said: “In the UK we police by consent, which is why it’s so important that the public have trust and confidence in our police.

“A series of devastating scandals in the Met, including the murder of Sarah Everard by Wayne Couzens, the racism, homophobia and misogyny of Charing Cross officers and the strip search of a Black schoolgirl have led to confidence levels in the Met hitting an all-time low.

“There are thousands of brave, decent police officers in the Met and the mayor is determined to deliver the changes necessary so that our police service has the confidence of all the communities it serves.”

On average, just 49 percent of Londoners said they thought the Met did a good job of policing their local area – though there are disparities between boroughs.

Croydon had the lowest public satisfaction with just 37 percent of residents agreeing police did a good job.

In Richmond-upon-Thames, however, this rose to 67 percent.

There were significant disparities between boroughs in terms of other measures as well.

While just 39 percent of Lambeth residents agreed the Met treats everyone fairly, 80 percent of people living in Hillingdon agreed with the statement.

Claire Waxman, London’s Independent Victims’ Commissioner, said the decline in public trust and satisfaction “comes as no surprise”, having “engaged with many victims and the organisations who support them”.

Ms Waxman said: “Trust and confidence are a fundamental element of our justice system, as we need victims to come forward and report crimes, and we need them to stay engaged in the process once they do.

“The criminal justice system continues to fail many victims, and significant work is needed alongside a cultural shift to improve the response to victims and understand the important role they play in the justice process.”