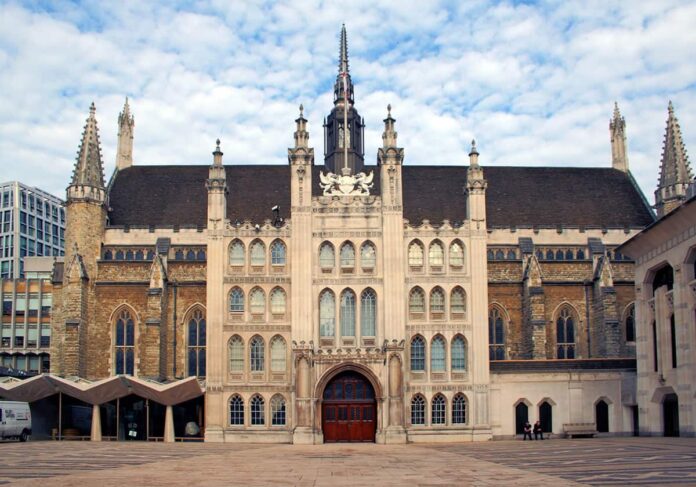 There will soon be a new sheriff in town… two of them, in fact.

And while alderman Vincent Keaveny looks set to take the aldermanic sheriff post at Common Hall on Monday, the non-aldermanic role is a three-way stand-off in which no one is blinking first.

Following our profile on diversity champion Gwen Rhys in the last edition of City Matters, we now shine the spotlight on the remaining candidates hoping to garner favour among their fellow liverymen during the Midsummer Common Hall.

The sheriff seats are currently occupied by alderman Timothy Hailes and Neil Redcliffe respectively, but that is all set to change when the annual round of votes are cast at Guildhall at high noon on 25 June.

“My candidacy for non-aldermanic sheriff is founded on my wholehearted support of the livery, the Lord Mayor and the City of London,” says Liz Green.

“If elected to the ancient role of sheriff, I would very much welcome the opportunity to further highlight the excellent work carried out by all livery companies in increasing outreach, improving lives and making the City relevant to all.”

Ms Green reckons her PR and marketing, management and commercial background would help her complete her election objectives, and can draw on a vast history of livery activities to back up her pledges.

“I am very proud to be a third generation Master Framework Knitter, following my father (1980) and both grandfathers (1944 and 1950), the latter of whom founded successful hosiery companies in Leicester, and my father worked for the family firm (Byford’s) until it was sold.” she explained. Her paternal grandfather was also Master of the Gardeners’ Company, while two uncles served as Master Framework Knitter, one of whom was also Master Baker.

Her mother, Baroness Byford, was elected Master Farmer in October 2013 but following the death of her father six weeks after her mum took office, Liz acted as consort throughout the year.

“We are the first mother and daughter to both be Master of a City Livery Company,” she said.

Liz added: “I pledge my full commitment, energy and skills to supporting the livery movement, the Lord Mayor, the shrieval team and HM judges. I ask for your support of my candidacy for sheriff.”

Richard Fleck, a partner since 1980, is now a consultant with Herbert Smith Freehills and Immediate Past Master of the Tallow Chandlers Company.

Named a ‘Top 100’ lawyer five times in the USA during his career, he was awarded the CBE for services to business and the law in the Queen’s New Year Honours List 2009, reflecting his international expertise and nature of his work for clients.

Closer to home in the City, Richard joined the Worshipful Company of Tallow Chandlers in 1976, becoming a liveryman in 1980 and Master for 2016/17.

A man with an appetite for doing good, Richard is a member of the committee for the Lord Mayor’s Big Curry Lunch. He is also a Freeman of the City of London Solicitors’ Company, and a member of the City Livery Club and the Vintry and Dowgate Wards Club.

Now he is turning his attention to a new office from which he can encourage fresh collaboration and new ways of working. Addressing the electorate ahead of the vote he said: “I am a great supporter of the livery and all that it has achieved over the centuries. But I am also very conscious of challenges facing the City.

“I would like everyone to understand that I fully appreciate the importance of this election to you. You are electing someone to represent you and the things you hold dear, and who you can have confidence will promote those values as effectively as possible.”

A Past Master of the Worshipful Company of Glass Sellers, Gwen Rhys is also a liveryman of the Needlemakers’ and Spectacle Makers’ Companies, and the Welsh Livery Company. She is also a member of Queenhithe, Aldgate and Cheap Ward Clubs.

It is her 25 years of liveryman standing that she is confident will see her elected next month, achieving a long-term ambition to reach a greater platform from which she can stimulate change.

“My commitment to greater diversity and inclusion, and in particular the need to see more women in senior roles across the financial and professional services, is well known and will bring an added dimension to what is often an all-male team supporting the Lord Mayor in promoting the City at home and overseas.”

Mr Keaveny heads into next month’s election with a clear path to the finish line – and the winner’s enclosure – ahead of him as the only candidate in the aldermanic sheriff vote.

The decision to put him forward for sheriff was made in May 2017 by the Court of Aldermen, a full 13 months before the yearly vote, but it is not without a rich pedigree that Mr Keaveny carries forward the flag.

Elected an alderman for the Ward of Farringdon Within in 2013, he is currently a member of the City’s freedom applications committee, and has previously served on the Corporation’s finance, planning and transportation, and City Bridge Trust committees.

Vincent also devotes much of his time to the next generation as a governor of the City of London School and is chairman of the Samuel Wilson’s Loan Trust. In addition, he is a member of the Court of The Honourable The Irish Society.

In 2014/15 Mr Keaveny held the title of Master of the City of London Solicitors’ Company and is Under Warden of the Woolmen’s Company, but his livery status does not end there, and to his name boasts liveryman titles with the Distillers and Spectacle Makers.

To complete his social network Vincent is also senior patron of the Farringdon Ward Club and a member of the City Livery Club and City Pickwick Club.