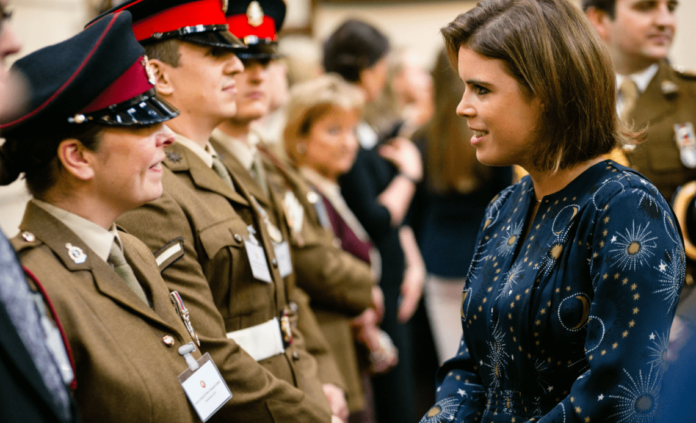 Princess Eugenie and British Army chief Nick Carter were among 1,300 guests indulging in the great British pastime of a midday tandoori chicken yesterday at the annual Lord Mayor’s Big Curry Lunch at Guildhall.

The 28-year-old royal, who is currently planning her wedding to wine merchant Jack Brooksbank in Windsor later this year, was a guest of honour at the annual fundraiser, which is organised by the Soldiers Charity to support members of the armed forces.

She greeted City dignitaries, including Lord Mayor Charles Bowman and the Lady Mayoress, senior army officers and guests who tucked into a buffet of several different curries, pilau rice and flatbreads followed by a silent auction.

The Big Curry Lunch, now in its 11th year, is one of the largest City charity events, raising more than £1.7million for members of Her Majesty’s Armed Forces who have served in Iraq and Afghanistan. Last year’s event alone raised more than £189,000.

Princess Eugenie was this year’s royal guest of honour taking the baton from her father Prince Andrew in 2017 and cousin Prince Harry in 2016. After lunch she was spotted visiting stalls hosted by the City’s livery companies outside the Great Hall.

Curry is a long-standing tradition in the British Army, originating from its long service in India and elsewhere in the Asian sub-continent, particularly during the days of the British Raj under Queen Victoria.