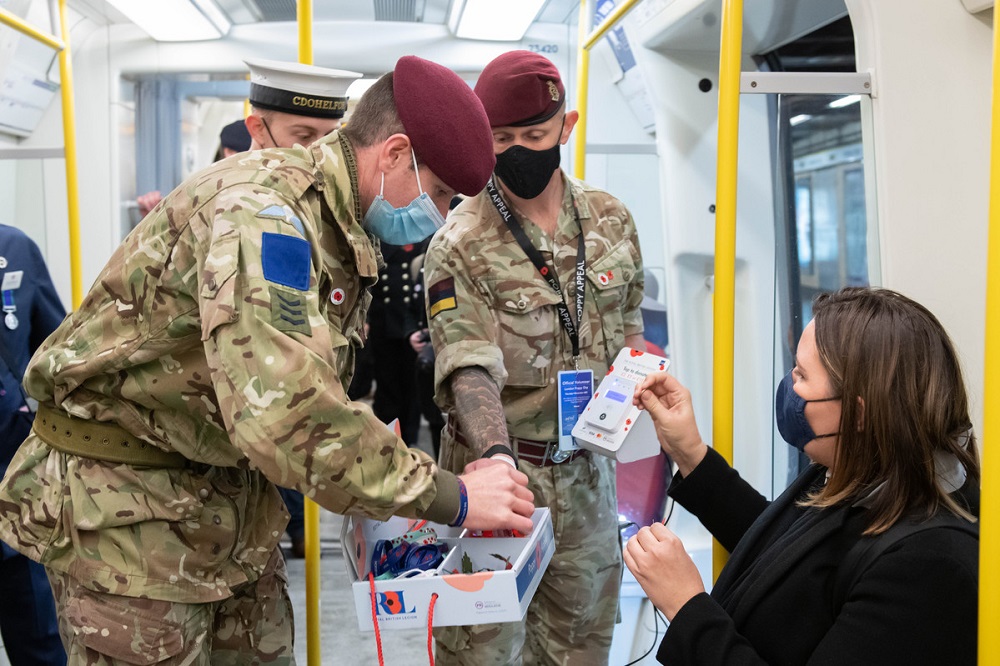 Transport for London (TfL) is paying tribute to servicemen and women ahead of Remembrance Day as collections return to the network.

Fundraising was significantly reduced last year due to restrictions placed during the pandemic.

TfL has partnered with the Royal British Legion (RBL) to support their fundraising, with collections at 50 stations across London.

More than 3,000 volunteers and fundraisers have come together to collect donations across the TfL Rail and Underground network, including members of the Armed Forces from the British Army, Royal Navy and Royal Air Force.

Donations, which can now be made via contactless, help the RBL provide critical support to members and veterans of the armed services, as well as their families and dependents. Some of TfL’s staff are veterans themselves whose service gave them critical skills for the jobs they do now.

Station roundels have been replaced with the iconic poppy symbol at ten Underground stations and 14 Overground stations, and giant poppies are visible on six specially wrapped London buses.

Poppy vinyls are also decorating DLR and TfL rail services, a number of trains and a limited number of Santander Cycles. TfL-owned piers will also be proudly flying poppy flags.

Fundraising kicked off on London Poppy Day last week at Liverpool Street station with guest appearances from Armed Forces ambassador and actor turned investigative journalist, Ross Kemp; and serving officer, Corporal of Horse, Richard Jones, who won Britain’s Got Talent in 2016 after impressing the nation with his magic skills.

Kemp also pre-recorded a special announcement that was heard across many Underground and Rail services on the day encouraging people to give generously.

Richard and several members of the Armed Forces then did a special collection on the Circle Line to help encourage customers to donate money.

As always, all London stations will fall silent at the stroke of 11am Thursday 11 November to remember those who bravely fought for their country.

On Remembrance Sunday (November 14), members of the London Transport Old Comrades Association will participate in the Remembrance Day Parade to the Cenotaph.

Andy Lord, Managing Director for London Underground at Transport for London, said: “TfL has a longstanding relationship with the Royal British Legion, and we are extremely proud to support their fundraising for veterans, serving personnel and their families.

“We had to reduce charity collections in our stations last year due to lockdown restrictions, so we’re happy to welcome back RBL volunteers into our stations for the Poppy Appeal and help raise money for this incredible charity.”