With the luxury saloon EQS and the sporty executive saloon EQE, Mercedes-Benz already boasts an attractive line-up in its all-electric stable. The EQS SUV, the third model in the series, looks an equally tasty proposition.

With plenty of space, comfort and connectivity for up to seven passengers in its avant-garde interior, it’s the kind of city-to-country drive that will certainly pique the interest of London’s work hard, play harder big wigs.

With powerful electric motors, responsive 4MATIC all-wheel drive and an intelligent OFFROAD driving mode, the EQS SUV is also capable of tackling light terrain with little bother – great for weekend escapes with the kids in tow. 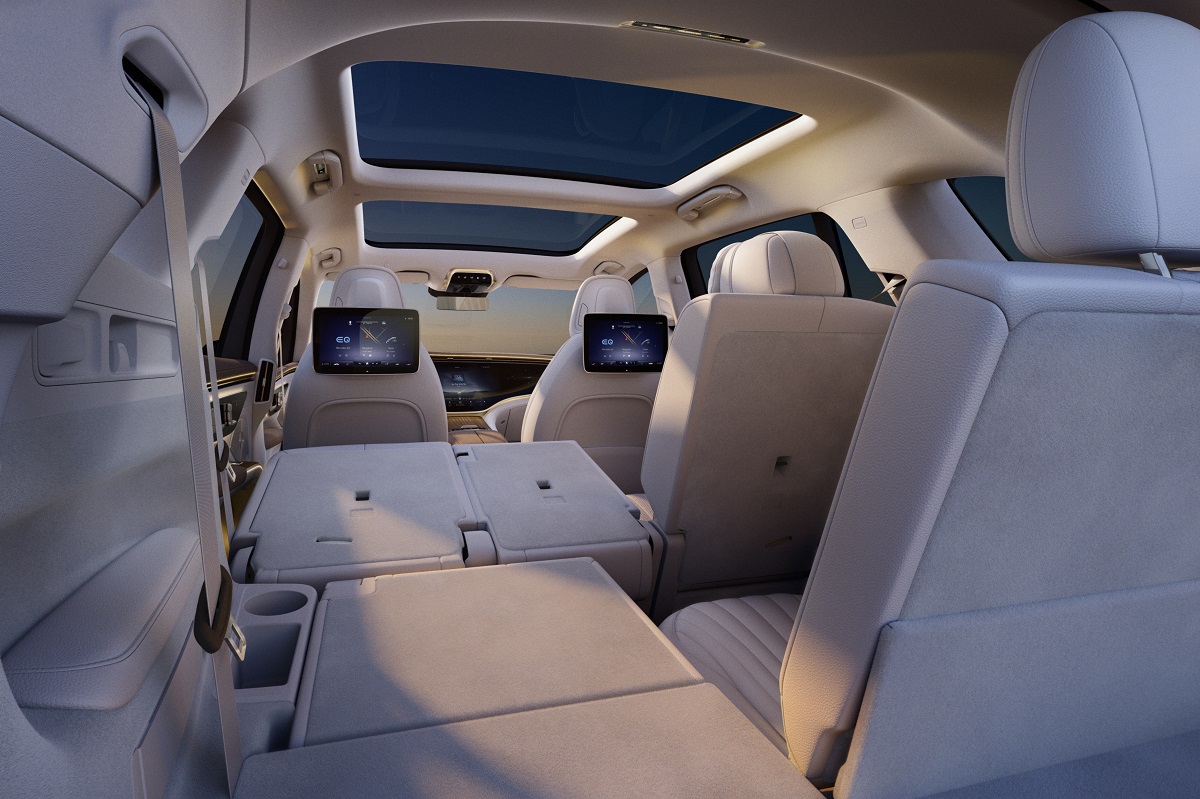 The second row of seats can be electrically adjusted as standard and up to four golf bags fit in the boot – even more excuse to book that end of quarter meet at the club. A third row with two additional individual seats and extensive comfort features for all passengers is available as an option, should your tribe swell to such numbers.

The EQS Saloon is the current aerodynamics world champion for production car, and its purposeful design with smooth underbody laid the foundations for aerodynamic measures on the EQS SUV. The optimisation of SUV-typical flow details led to a hitherto combination of spaciousness and efficiency, according to MB bosses.

More so, the EQS Saloon was the first model series from Mercedes-Benz in which completely new vehicle functions could be activated via over-the-air updates (OTA).

However, with the EQS SUV, this offer is significantly expanded. For example, Trailer Manoeuvring Assist or MBUX (Mercedes-Benz User Experience) Augmented Reality Navigation can be activated at any time.

The EQS SUV also represents a major step towards MB’s zero-emission mobility plans, moving the manufacturer a step closer to fulfilling Ambition 2039 – to have an emission-free fleet of vehicles by 2039.

Indeed, the EQS SUV puts real solutions for emission-free mobility, intelligent resource conservation and responsible circular economy on the road, and is produced in a completely CO2-neutral fashion.

For the tech-heads, the chassis has a four-link axle at the front and an independent multi-link suspension at the rear. The AIRMATIC air suspension with continuously adjustable damping ADS+ comes as standard.

Rear-axle steering with a steering angle of up to 4.5 degrees is also standard and provides plenty of manoeuvrability in the city and agility when on tougher patches of track.

Optionally and also via an OTA update, a version with up to 10 degrees steering angle is available, though do remember to stay in your lane.

Safety is also paramount in this latest model. The European version of the EQS SUV is the first Mercedes-Benz model to be able to detect whether rear seats are actually occupied.

Another new safety feature is what is known as the ‘occupant presence reminder’ – a system that can indicate when children may have been overlooked in the rear of the vehicle.

But what about range anxiety? Well, Mercedes me Charge5 is one of the largest charging networks worldwide: it currently comprises over 700,000 AC and DC charging points, including around 300,000 in Europe.

High-quality guarantees of origin ensure that as much green power from renewable energies is fed into the grid as is withdrawn via Mercedes me Charge.

Navigation with Electric Intelligence plans the fastest and most convenient route, including charging stops, based on numerous factors and reacts dynamically to traffic jams or a change in driving style.

This includes a visualisation in the MBUX infotainment system as to whether the state of charge of the battery is sufficient to return to the starting point without charging. Charging stations along the route that have been added manually are given preference in the route calculation. The estimated charging costs per charging stop are also calculated automatically. Still feeling anxious?