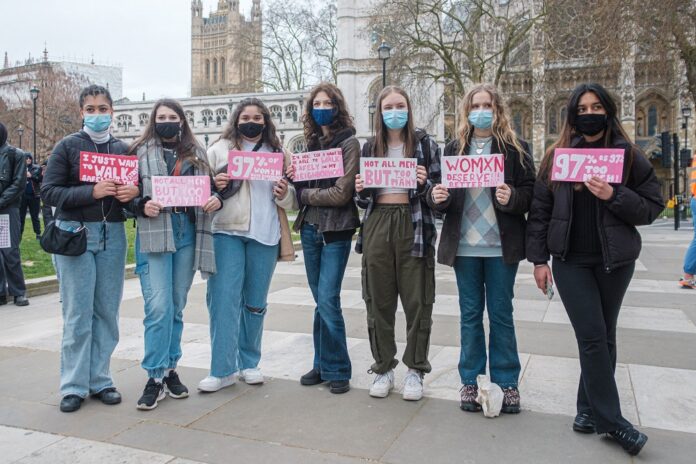 A “cultural shift” is needed to tackle violence against women and girls, Sadiq Khan has said as London marks one year since the murder of Sarah Everard.

Ms Everard, 33, was raped and killed by serving Met officer Wayne Couzens after he abducted her while she walked home in south London on 3 March last year.

Her murder sparked a debate about misogyny in the police and across society.

The last 12 months have seen a raft of measures and pledges about addressing violence against women from Westminster and City Hall, but questions remain about how much progress has been made.

The Mayor of London told the Local Democracy Reporting Service it is “really important to recognise that women don’t feel safe across our country” and we must “listen to what women and girls are saying”.

Khan said: “It’s horrific to think [Sarah Everard] was abducted, raped and killed; but also, that the person who did that was a serving police officer. That particularly is a source of huge concern. It’s really important for us to recognise that women don’t feel safe across our country, nor do girls.

“For me, this is a societal issue. We need to have a cultural shift in relation to how my gender thinks and behaves towards women and girls. It should start in the school, in relation to the way our children are taught – boys are taught – about healthy relationships, about respect, all the way to misogyny being made a hate crime – that sends a message; sexual harassment in a public place being a criminal offence – that sends a message. But also, making sure that the deep cultural issues in the police service are addressed.”

Last month, Met Commissioner Cressida Dick resigned in dramatic fashion following the release of an IOPC report that uncovered misogynistic, homophobic and racist messages shared between officers at Charing Cross Police Station – the latest in a long list of scandals to rock the Met.

But Khan has said that reforming the Met and restoring public trust – particularly the trust of London’s women – is “not about one person”.

But he added that “it’s got to start at the top”, and that “unless you recognise and acknowledge the scale of the problem, you can’t have a plan to address the issues and win back trust and confidence”.

A campaigner claimed the impact of Ms Everard’s murder was a watershed moment for women’s safety that has been wasted. Campaigners including Reclaim These Streets are part of a legal bid to try to force the Government to hold a statutory public inquiry to investigate misogyny in policing.

Dame Elish Angiolini is leading the first part of a non-statutory inquiry looking at how Couzens was able to work as a police officer for three different forces — Kent, the civil nuclear constabulary and the Met — despite concerns about his behaviour. Following this, there are plans for a second part that would look at wider issues in policing.

The Met has commissioned its own review of the culture and standards at the force, including Couzen’s former unit — the parliamentary and diplomatic protection command.

Klingler added: “We need to overall understand the deep levels of misogyny within the Met, and they need to be exposed and accounted for. If there’s not a statutory inquiry, police aren’t required to testify. The families aren’t given legal representation as interested parties. Reclaim These Streets are not given legal representation… there’s no way to fix the force without rooting all of this out.”