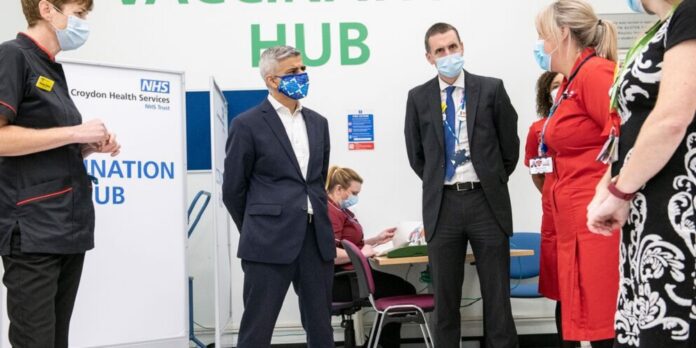 The end of the Government’s Plan B restrictions is “great news” for London’s economy but it is “not the end” of the fight against COVID-19, Sadiq Khan has said.

Prime Minister Boris Johnson announced on Wednesday that Plan B measures would be allowed to expire from next Thursday, meaning work from home guidance will end and mandatory COVID passports in some settings will be dropped.

The restrictions were introduced in December to combat the rapid spread of the Omicron variant of COVID-19.

Despite the number of infections remaining high, the Prime Minister said scientists believe the UK has passed the peak of the Omicron wave of infections.

Responding to the announcement that Plan B restrictions will end, Khan said it is “great news for our city’s recovery” and that it has been “made possible by the fantastic efforts of everyone in our city”.

But Khan stressed that COVID-19 “still poses a significant threat to all of us” and that “this is not the end of our fight against the virus”.

Although there will no longer be a legal requirement to wear a face covering on public transport in the UK, Khan confirmed that it would remain a condition of carriage on TfL services, as it was between July 19 and the beginning of Plan B restrictions.

Khan said: “If we have learnt anything from this pandemic, it is that we must not get complacent and undo all our hard work and sacrifices. That’s why face coverings will remain a condition of carriage on TfL services. I’m asking everyone in our capital to do the right thing and continue to wear a face covering when travelling on TfL services to keep us all protected and to prevent further restrictions from being necessary later down the line.

“It’s important that Londoners continue to test regularly and report their results, to keep our communities safe from infection. I also want to urge anyone who hasn’t come forward for their first, second, or booster vaccination to do so now, even if you’ve had COVID-19 before. It’s never too late.”

The news Plan B restrictions are being dropped has been welcomed by business groups across the capital.

Muniya Barua, Managing Director of Strategy and Policy at London First, said: “The impact of restrictions was so stark for many firms in the run up to Christmas and beyond, so support should continue and be extended to longer-term business rates relief and VAT reductions to help those hit hardest.

“The Prime Minister is right to urge caution – no one wants to see another return of restrictions – and it would be prudent to keep face masks on public transport to boost confidence as people return to their workplaces.”

Meanwhile Caroline Russell, who chairs the London Assembly health committee, has urged Londoners who have not yet been vaccinated or received their booster jab to do so.

Russell said: “Our city remains particularly vulnerable to COVID-19, with many Londoners still to come forward for vaccination. Because of this, we support the suggestion of continuing to wear face coverings in enclosed or crowded spaces.

“A wall of immunity is our best defence against COVID-19. We reiterate our call for all Londoners who have not taken up the offer of a vaccine or booster to do so, as soon as possible.”

According to the latest figures from the Office for National Statistics, 3.4 million people in the UK tested were believed to be infected with COVID in the seven days leading to January 15, down from 4.3 million the previous week.

Last week, London’s public health chief Professor Kevin Fenton told the London Assembly that, while community infection rates were “phenomenally high” in the capital, the peak of the Omicron wave occurred “just before the New Year”.

Following Johnson’s announcement on Wednesday, working from home guidance will end immediately while remaining Plan B restrictions will end next Thursday.