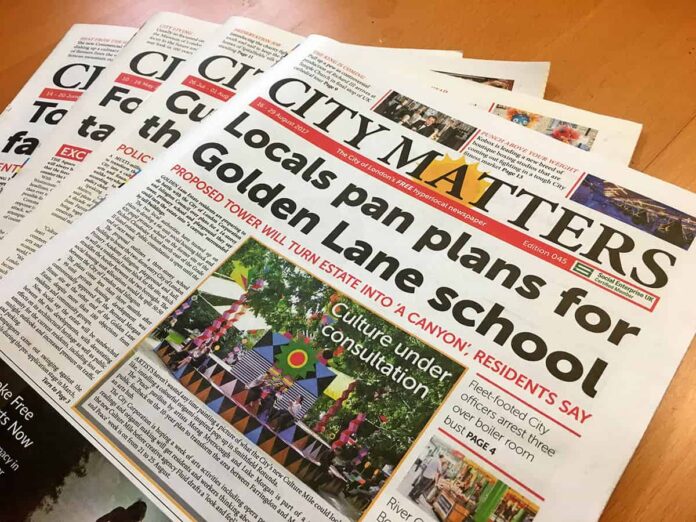 City Matters celebrates its first birthday this week – and what a year it has been for the City of London’s hyperlocal newspaper.

Launched with the aim of giving the Square Mile the community voice it so desperately needed, City Matters has gone from strength to strength, bucking the trend to become one of print media’s major recent success.

We’re a small team but we’re causing a splash – so much so that the London Assembly cited City Matters as a shining light among the Capital’s hyperlocal crop.

That glowing endorsement in the assembly’s State of Local News: Read All About It report led to a prime-time feature on BBC London News in August, when reporter Sarah Harris stopped in to speak to our industrious team about why, contrary to popular belief, there remains fertile ground for print publications in the digital age.

Breaking into the media landscape with a brand new title was never going to be a walk in the park, but we’ve enjoyed some great days along the way that have made the challenge one to savour.

We stood side-by-side with the cheering crowds as the rain bucketed down on the Lord Mayor’s Show, revelled in the spectacle of City traditions such as the annual Sheep Drive and the Trial of Pyx, and applauded the champions of the Dragon Awards.

We’ve also given a platform for residents to critique the authority that serves them, covered the fine work of our local police force, and been there to highlight the City’s defiance in the face of terror attacks on our doorstep over the summer.

We’re thrilled to be blowing out the birthday candles this week, having seen our first edition hit the streets on 22 September 2016, but we know we wouldn’t be here without the support of our loyal advertisers and, of course, you – our dedicated readers.

Whether a local business or a major corporation, your commercial backing has been invaluable to our growth, and as we tick off our first year in business you should feel as much a part of our success as the team here – you’ve helped create a community platform like no other in the City.

But now is the time to look forward; we have big plans to expand our footprint, and we will need your continued support to pull them off.

We’re always striving to better serve our local community, and cannot thank you enough for helping to make our newspaper the success it is.

Here’s to another great year.