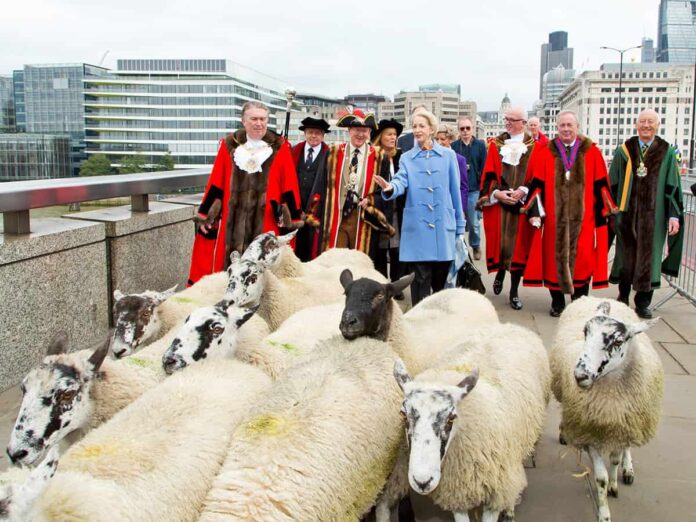 IF Little Bo Peep is still looking for her sheep she would do well to check out the Square Mile this Sunday, where the City’s freemen will be holding their annual Sheep Drive across London Bridge.

The unusual spectacle is staged by the Worshipful Company of Woolmen to raise money for charity, and is the one time of the year the City’s freemen can exercise their ancient right to drive sheep across the Thames.

Celebrity chef Mary Berry will lead her fellow freemen and their families – around 600 people in total – in accompanying 30 sheep over the bridge; slightly different terrain from what the animals are used to at their farm near Bedford. The drive concludes near Monument, where the company holds its annual Wool Fair.

The freeman’s right to drive sheep across London Bridge was originally granted to allow traders to bring sheep into the City for sale in the 12th century.

Former Woolmen’s master Bill Clark reintroduced the practice five years ago to raise money for the Lord Mayor’s Appeal and the Woolmen’s Charitable Trust, which promotes the wool and textile industries and supports research into animal husbandry and the health of ewes and lands.

“We aren’t exactly sure when they stopped driving sheep over the bridge but certainly in the days before the motor car,” Bill said.

“I thought it would be rather fun during my year as master to reinvigorate the practice, and so I designed it with the animal health and welfare aspects in mind and the Corporation’s animal welfare unit were very supportive.”

Previous Sheep Drives have raised up to £30,000, and the interest is expected to be even higher this year with the addition of Mary Berry to the line up, herself a member of the Worshipful Company of Bakers.

“It’s always very colourful, we have freemen in their official robes, and plenty of people will dress up as shepherds and Bo Peep,” he says.

“We do get a lot of spectators wondering what these crazy Brits are up to… it has even gone international this year – we’ve got a group of Ukrainians taking part.”

But all prospective shepherds had best keep their wits about them as herding sheep can get a little hairy – or should that be woolly?

“Last year we had a potentially difficult situation; we had some shoddy barriers and one of the sheep got through an inner barrier,” Bill said.

“Fortunately he didn’t make it far and we were able to contain it pretty quickly and get him back to the flock.”