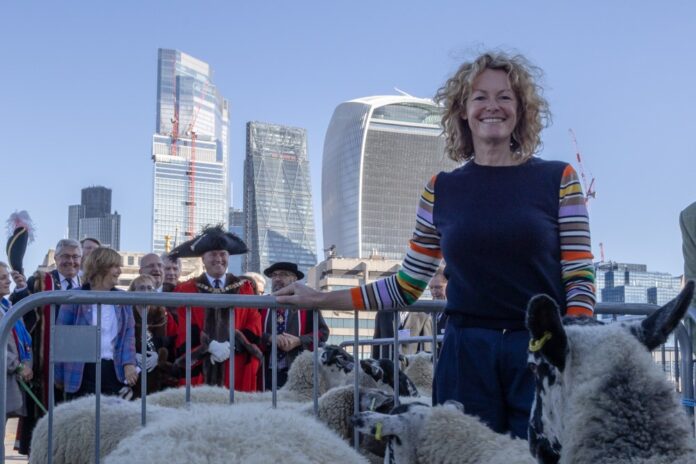 Broadcaster and farmer Kate Humble;,familiar to many from BBC’s Countryfile and Channel Five’s Escape to the Farm joined over 1,000 Freemen of the City of London as they exercised their ancient right to drive sheep toll-free over London Bridge.

Kate, 53, joined the Lord Mayor of London Vincent Keaveny, as well as Sheriffs and Liverymen of the City of London in colourful ceremonial robes as they drove a flock over the bridge against the backdrop of the modern City skyline.

The event was organised by the Worshipful Company of Woolmen and raises money for the Woolmen’s Charity and Lord Mayor’s Appeal. and highlights wool as one of the world’s most versatile, natural and biodegradable fibres. Sponsors include The Campaign for Wool.

Kate, who also farms in the Wye Valley, then visited the Livery and Wool Fair at the Monument where members of the public could enjoy demonstrations of sheep shearing and traditional crafts.

Kate said: “It has been a huge honour to participate in this year’s Sheep Drive and Livery Fair. An incredible spectacle that commemorates London’s connection to the countryside and celebrates the many uses of wool and its natural complement to modern living.”

NOW READ: Everything you need to know about the City of London’s Great 12 Livery Companies

The main sponsor of the event is The Campaign for Wool; a global endeavour initiated by its Patron His Majesty King Charles III, when he was Prince of Wales. It promotes the importance of wool as an environmentally friendly, natural product that is incredibly versatile in its uses.

The Lord Mayor Vincent Keaveny said: “As Lord Mayor and as a liveryman of the Worshipful Company of Woolmen, I am delighted to have taken part in this year’s Sheep Drive and Livery Fair.

“I would like to thank the Freemen, Livery Companies, The Campaign for Wool and all our sponsors raising funds for the Woolmen’s Charity and Lord Mayor’s Appeal. The Sheep Drive and Livery Fair remind us all that the link between City and Wool remains as important to us today as it has ever been.”

Peter Hullah, Master of the Worshipful Company of Woolmen, added: “Today’s very special 10th anniversary Sheep Drive and Livery Fair is a wonderful opportunity to share the news about the wonders of wool, a unique, natural fibre with potential uses seemingly as wide as the human imagination.

“At the same-time it is a fantastic opportunity to raise funds for the Woolmen’s Charity and the Lord Mayor’s Appeal. My thanks go to Kate Humble, the Lord Mayor and to all those involved including – but certainly not limited to – the farmers, Young Freemen, Cadets and countless volunteers who have made this very special day in the City’s calendar happen.”