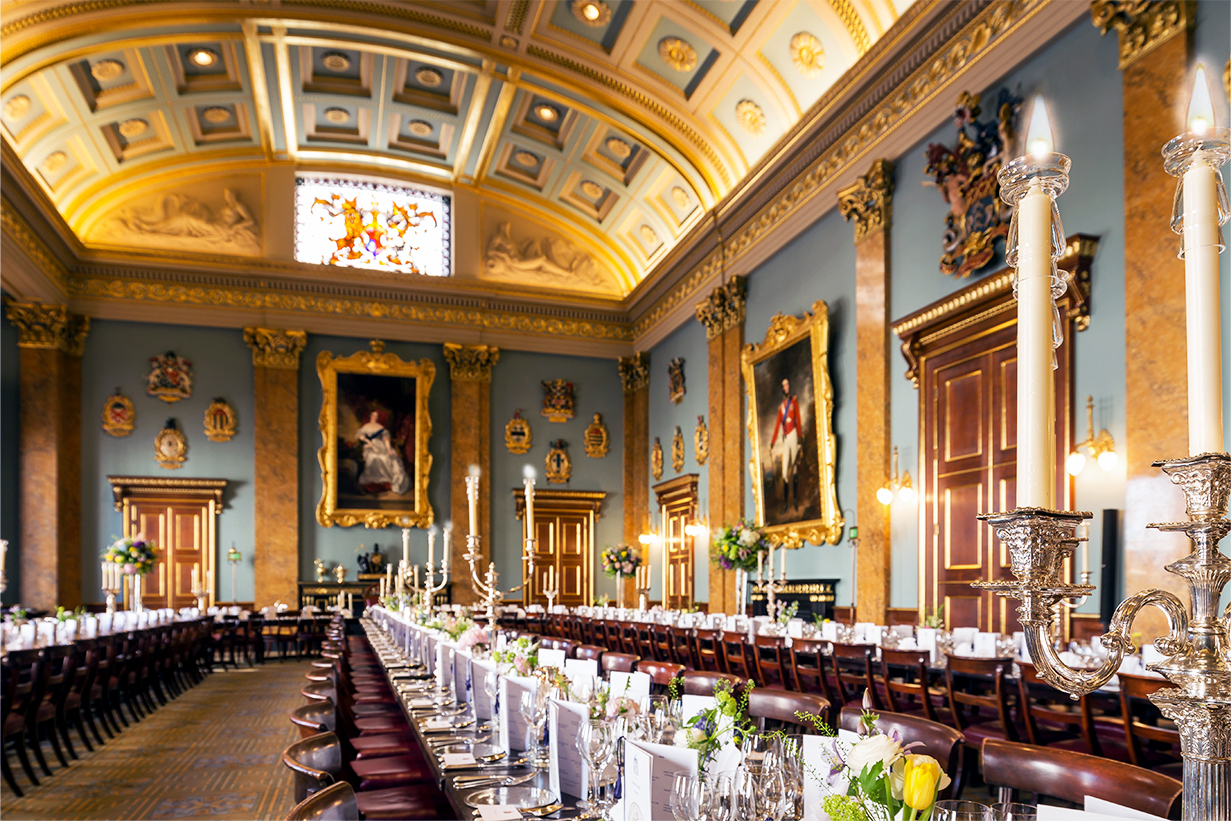 Whether you’re a new-age Londoner or one that’s born and bred, you’re unlikely to be aware of how many Livery Companies there are (110), or just how much of an impact they have had on the city you call home (hint: it’s a big one).

You may not even have any idea what a Livery Company is, assuming it’s a company that deals in offal (it’s not), and therefore has no place occupying any of your interest (which would be a shame, as again, big impact, not offal).

The truth is that so much of the City of London’s history is intertwined with Livery Companies, and they continue to have a major say in Square Mile affairs even to this very day.

Beginning as informal groups of trades/craftsmen and women, they developed into formal governance bodies. The Companies became so important that they were able to regulate their trades, provide apprenticeships and career progression, and endearingly act as religious, social and charitable support for their members.

Once well-established in the Company, and having completed their apprenticeships, members could become ‘freemen’, in control of their own trade and no longer at the whim of the Master.

Becoming a fully-fledged, high ranking member of the company meant becoming a ‘liveryman’, so named because of the traditional livery garment that would show your allegiance to your Livery Company (see, nothing about offal).

Today, the Freedom of the City of London is open to all, and you can apply to become a freeman without belonging to a Livery company; but you must be a freeman before ascending to liveryman.

The privileges of the liveryman mostly remain the same, including the exclusive right to vote in the annual elections of the Lord Mayor of London, the Sheriffs and various other City positions.

A lot of the Livery Companies themselves are no longer involved with their root trades, but continue to play an important part in the make-up of the City, contributing to valuable charitable causes and funding various education and development programmes.

As there are 110 Livery Companies in the City, it would be very difficult to document them all, but it also wouldn’t be fair of us to play favourites.

That said, in 1516 Lord Mayor Billesdon put the 48 companies of the time in order of precedence, to put paid to rivalries and establish a clear order.

Despite there being a good few more now, this original order has not changed, and out of the 48 came The Great Twelve; the 12 most powerful, wealthy, and influential Livery Companies in London.

The Mercers’ Company first received its Royal Charter in 1394, and were originally made up of merchants, usually dealing in fine cloth and textiles. Mercers would have traded fabric and goods in various ways, and surely would have been fond of a good yarn; none more so than that of famous merchant, Richard Whittington, or ‘Dick Whittington’ as he is commonly known today. Whilst the famous panto tale is far from the truth, Whittington was a real-life, valued member of the Mercers’ Company (oh yes he was) and served as Master three times throughout his life. Throughout its history, the Company have loomed large over the education sector, providing patronage to a number of schools and colleges since the 16th century. Its connection to the original trade may have unravelled, but it continues to support young people and education in a variety of ways, and aim to donate £15 million each year to a number of charitable causes.
mercers.co.uk

Once the first of the Great Twelve, the Grocers’ Company gained its royal charter in 1426, and was originally known as the Guild of Pepperers. By 1373 these general traders were known as the Grocers, who ‘engrossed’ (bought and sold) all manner of items, and were responsible for both grading spices (a process known as garbling) and weighing heavy goods in the City. The Company arms features the camel, a motif that is peppered throughout the history of the Company, being the symbol of the spice trade. Rumour has it that the Company even lost its top spot in the Great Twelve thanks to a camel emitting “gross” smells in front of Queen Elizabeth I. Nowadays the Company is committed to supporting a variety of good causes out of its home on Princes Street.
grocershall.co.uk

The Drapers’ Company was originally made up of traders in the woollen cloth industry. Following the expansion of the cloth trade throughout the 15th century, it held a powerful position, and controlled sales at the City’s cloth market, where merchants from all around the world would come to barter and exchange goods. Its commitment to charity is far from woolly though, with philanthropy running through its history from the 16th century to the present day. Drapers’ Hall on Throgmorton Street, originally the home of Thomas Cromwell, has been damaged multiple times throughout the years; however, the Company has continued to show moral fibre, knitting the building back to what is described as the “architectural patchwork” that it is today.
thedrapers.co.uk

The Fishmongers’ Company have long held an important plaice (couldn’t resist) in the Twelve Great Liveries, largely owing to London’s connection to the sea via the Thames. Originally granted a Royal Charter in 1272, these Petermen (named for their devotion to St Peter, patron saint of fishermen) were split into two branches, Salfishmongers and Stockfishmongers, until they were united under a sole coat of arms in 1512. Fishmongers’ Hall stands proudly on the banks of the Thames, and the Company has continued to support the fishing sector up to the present day. However, the sheer scale of its charitable giving now extends beyond the trade, with its most recent grants programme focusing on mental health, education and nutrition. Fin.
fishmongers.org.uk

The Goldsmiths’ Company was founded to regulate the trade of the Goldsmith, and has been responsible for testing the quality of gold and silver since 1300. In recent years they’ve branched out, testing the quality of platinum and palladium (the metal, not the venue). They coined the term ‘hallmark’ from when Goldsmiths would bring their wares to the hall for assaying and marking; and the hallmark of a good coin is that it sails successfully through The Trial of the Pyx. This Lord of the Rings-sounding process is simply how the Company tests the coinage produced by the Royal Mint, and is one that still occurs today. Based out of Foster Lane, the Goldsmiths’ Company also supports charities and educational projects, as well as boasting the only dedicated library to silver and jewellery in the country.
thegoldsmiths.co.uk

Originally named the Fraternity of St John the Baptist of Tailors and Linen-Armourers, this association of working tailors received its first Royal Charter in 1327. In 1503, due to the large number of traders in the Company, the name was altered to include the word ‘Merchant’, also reflecting its position of wealth and power in the City. Although the connection to the tailoring trade slowly tapered off over the years, it has recently been revived through the Golden Shears competition, with the finale being held at Merchant Hall on the appropriately named Threadneedle Street. It also dedicate much time to philanthropy, supporting educational charities and programmes, and annually swaps positions in The Great Twelve rankings with the Skinners’ Company.
merchant-taylors.co.uk

The Skinners’ Company gained its first Royal Charter in 1327, and was originally made up of skinners in the luxurious fur trade. Early skinners would work directly with the skins, but demand eventually grew so high that Merchant skinners would merely buy and sell them, employing others to dress and make up the furs. The Company eventually controlled the quality of the furs sold throughout the country. It shed ties to the fur trade due to the decline in popularity, with furs falling out of fashion as early as the 16th century. Members now focus attention to charitable giving, with the specific aim of reducing poverty and its effects. The Skinners annually exchange positions with the Merchant Taylors’ Company.
skinners.org.uk

Originally made up of haberdashers selling a plethora of items that would make Hobbycraft weak at the knees, The Haberdashers’ Company received its Royal Charter in 1448, and merged with the Hatmaker’s Fraternity 54 years later. The Company thereafter consisted of two groups threaded together; Haberdashers of Hats and Haberdashers of Small Wares. Over the years the Company has changed tack, focusing its gaze on education and charity, and can be found in Haberdashers’ Hall in West Smithfield.
haberdashers.co.uk

Whilst the Salters’ Company did not receive its first licence until 1394, it is thought that its existence came about many years prior. The importance of salt had been well observed since before the Roman era, with a Roman soldier ‘not worth his salt’ being one deemed unworthy of his precious salt ration. Salt was considered essential for preserving meat and fish; however seasoned Salters would have been well-versed in all the ways this simple spice could benefit communities. The Company was originally established to confirm the Salters’ trading activities, and give young apprentices a flavour of the craft. These days the Company could be considered the ‘salt of the earth’, dedicated to the advancement of chemistry as a field of study, and focusing attention to charity.
salters.co.uk

The Ironmongers’ Company represented those who traded in iron or iron goods, receiving its first Royal Charter in 1463. Iron would have been used in a plethora of items ranging from tools and domestic products, to weaponry and armour, and ironmongers (or ferroners as they were also known) would have been galvanized to trade these wares and regulate quality. When the iron industry moved to the North of England and the Midlands, the Ironmonger’s Company steeled itself and changed focus to the charitable work that has underpinned its history, providing grants to benefit the young, local communities and the continuation of the Iron Trade.
ironmongers.org

With Vintners’ Hall known as the spiritual home of the international wine trade, it is safe to say that the Vintners’ Company have a nose for good wine, presiding over the trade from its first Royal Charter in 1363 until it was forced to yield in the mid 16th century. Over the years the Company has managed to regain much of its power and privilege, striking a complex balance between its vintage traditions (including Swan Upping, essentially a swan census), and its new, valuable role in the modern wine trade. It also does a corking job with its charity work, providing assistance to a number of causes, primarily homelessness, poverty and the effects of alcohol misuse.
vintnershall.co.uk

The Clothworkers’ Company, founded as a craft organisation in 1528, came to fruition through the merger of two pre-existing companies. The Fullers and The Shearmen were involved in the ‘finishing’ of clothmaking, a four-stage process that would see the cloth washed, dried, gathered and sheared to create a pristine finish. In a move of shear brilliance, these two companies were then woven together, strengthening themselves against its rivals, and gaining the power to regulate the craft of cloth finishing. The Company continues to support the textile industry to the present day, funding a variety of projects designed to promote and preserve textile technology, education and heritage.
clothworkers.co.uk