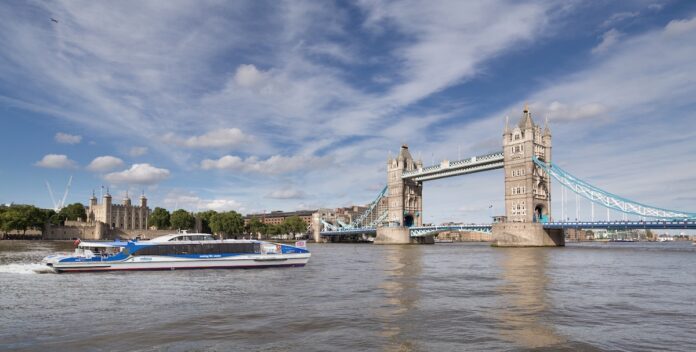 The sun has finally come out in London, just in time for the Thames Clippers 20-year anniversary prize giveaway this Friday.

If the weather holds out, swap your daily underground commute for one where you can soak up some of that magical Vitamin D and go in on the chance to win some goodies.

Passengers should look out for the MBNA Thames Clippers’ birthday fairies on board, who will be handing out scratch cards to 2000 lucky passengers. They’ll have the chance to win one of 200 experiences along the River Thames – between Woolwich and Putney, the full stretch of the River Bus operator’s service.

Prizes from 40 of their partners across London include a private river cruise aboard MBNA Thames Clippers’ very own  Orion Clipper with a complimentary bottle of Champagne, Bankside dining opportunities, tickets to shows at the O2 and free entrance to exhibitions at the Tate Modern, Museum of London and Royal Museums Greenwich. And the list just goes on and on.

Sean Collins, CEO and co-founder of MBNA Thames Clippers says “I’m excited to celebrate Thames Clippers’ 20th anniversary and showcase how much the business has evolved from when it first started.

“I couldn’t be more proud to say that from that first day, two decades ago, when we operated with just one vessel, carrying 80 people from Greenland, we now carry 4.2 million passengers annually, and boast a fleet of 19 vessels with an extended network of 22 piers from East to West, plus more in the pipeline.

“This success wouldn’t be possible without the fantastic team we have here at MBNA Thames Clippers. And, of course, the passengers, who over the years have trusted us to give them the best commuting and sightseeing experience in London so, on our 20th anniversary, we really want to celebrate with them and give something back to say a big thank you.”