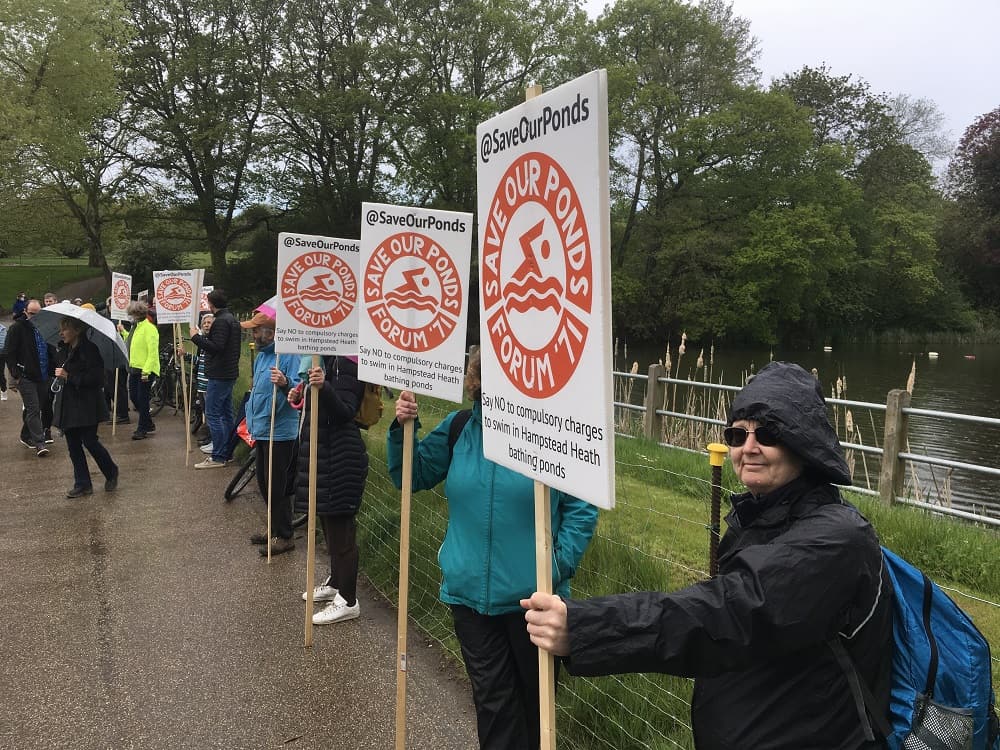 “Cold water swimming has an amazing effect, it has a calming effect on the whole system,” says regular swimmer Carol Archer.

She is one of the regular swimmers at the bathing ponds at Hampstead Heath and swims in all weathers right through the year.

Last year lockdown meant the swimmers were unable to use the ponds.

Campaigners from the Forum 71 group said that bringing in a charge when there’s a soaring need for support for mental health “is not only callous but short-sighted and irresponsible.”

The group takes its name from the 1871 act of Parliament which protected the Heath from encroaching development.

It believes compulsory charging could exclude those who are unable to pay.

The City brought in the changes “to ensure the long term financial sustainability of the swimming facilities” after a review in 2019.

Tom Frederic who swims at the Men’s Pond said: “Now more than ever, the benefit to London of maintaining the historic open access to the bathing ponds, free from compulsory charges, should be as obvious as it is immeasurable.”

Ms Archer said that was tough as lockdown triggered memories of difficult times and it was hard not being able to just go swimming on the spur of the moment.

“It makes me feel alive rather than in an inner grief,”  said the 71-year-old from Primrose Hill.

“We have a laugh, people will chat, it’s just a delight.”

She works as a consultant using her expertise in movement and physical activity in young children.

She stressed how important places like the ponds are especially as many have lost jobs and suffered poor mental health during lockdown.

“It was good to hit the water,” she recalled on the first day after the ponds reopened last summer.

However some of the changes because of Covid rules, such as new changing areas made it feel a bit “unsettling.”

She added: “I have got a lot from swimming for my whole well-being.

“What about people who can’t afford to pay? It denies many people who would have got a reprieve from the inner darkness by swimming.”

The charges could mean that “some people may never go back as they will not be able to afford it.”

Ben stopped swimming last year when the charges were introduced.

The North Londoner who is in his 30s swam daily at the Men’s Ponds for seven years.

He was later diagnosed with attention deficit disorder (ADHD) and said “there are countless amounts of adults who are diagnosed or undiagnosed for whom swimming is a form of self medication.”

“Cold water swimming is an extremely good form of medication for people.”

Ben works as an artist and educator and added: “The ponds have always been a very meditative space to get away from the city.”

Swimming pools can be competitive and have chemicals and he said he preferred swimming at the ponds.

He feared that many people would be excluded from the ponds because of  the charges,

A City of London spokeswoman said it rejected claims the decision to bring in charging for swimming at the Bathing Ponds is discriminatory or unlawful.

“All charges are reinvested to ensure that affordable, safe and sustainable access to outdoor swimming is available to as many people as possible for generations to come.”

“The Heath’s swimming facilities are accessible to people of all abilities and backgrounds.”

And the charity provides a range of concessions, with season tickets available for as little as £1.46 a week, she said.

“We are proud that Hampstead Heath is attracting a record number of swimmers, benefiting the physical and mental health of hundreds of thousands of people every year, ” she added.