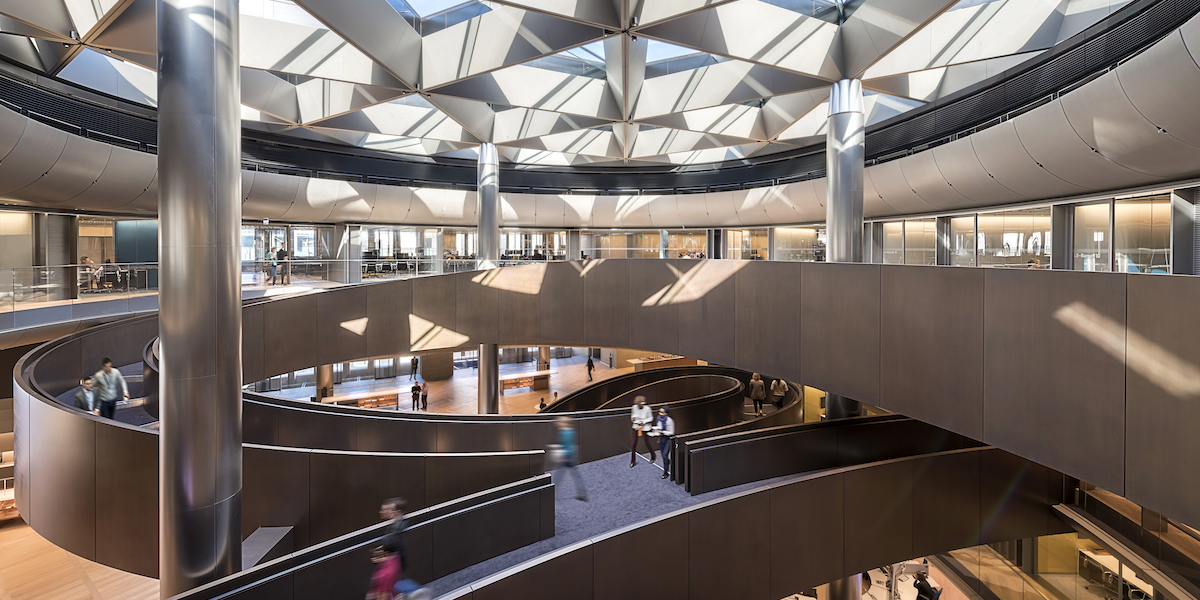 The City of London is taking centre stage for this year’s Open House London weekend. Private properties are opening up their doors to the public while the political and cultural institutions of the Square Mile are letting people explore more than usual – plenty are even running their own specially curated tours.

For both 21 and 22 September, people can run around the City, discovering new buildings they’d never heard of or get a sneak peak inside those you’ve always wanted to – Bloomberg HQ is one must-see. Just imagine what it would be like to work inside this architectural gem.

We’ve rounded up just a few of the best buildings to check out during the Open House London weekend. But there are so many more – pick and choose your favourites and get nosey for two days.

The home to the City of London Corporation is one of this year’s biggest players. Not only are people being granted increased access to the Grade I listed 12th Century medieval building, but a huge array of Square Mile tours begins and end here. And because the City has so many famous architectural sites, they’ve had to break up the area into smaller sections – this will stop you from walking all day long for the entire weekend.

Check out the North, East and West guided walks to learn some proper local history or take the Highwalks and byways tour to see the City from a totally different perspective. There’s even a Tokyo Bike Cycle Tour for the more active site seers out there. This explore the City’s social housing schemes and modernist estates from the past 70 years. While you’re at this hub, be sure to also check out the Guildhall Yard, Library and Art Gallery.
Basinghall Street EC2V 7HH

One of London’s most important post war housing developments (both Grade II and II* listed) is letting nosey neighbours in for both days of Open House London. Learn a little about how the Corporation housed those who were displaced by continuous bombings within the City of London, even though the trend was to push them out to the fringe boroughs. Local residents like these are hugely important for the cultural makeup of the area – reducing the business-only mantra. They also have their very own private rooftop garden which will be open to the public on Sunday only.
Golden Lane Estate EC1Y 0RD

This is still one of our very favourite buildings in London. We wish our offices were in here. It’s not only visually stunning, with the design gods Foster + Partners imagining the entire space, but incredibly sustainable and made for optimising a communal workplace culture. Occupying a full city block, the 3.2-acre site comprises two buildings united by bridges that span a pedestrian arcade that reinstates Watling Street, an ancient Roman road that once ran through the site. And, while you’re here, stop in at the Bloomberg Arcade for some great dining out. We are all about Kym’s and Brigadiers for dinner, but the brunch life should be experienced at Caravan City. Refuel before exploring more of the City’s buildings.
3 Queen Victoria Street EC4N 4TQ

The official residence of the Lord Mayor of the City of London, retaining its 18th Century character, is all about over the top opulence inside – that’s one lucky Lord Mayor. It’s rare to get such access to this building so be sure to take full advantage of it. Look out for the Salon, Drawing Rooms, Long Parlour, Egyptian Hall and the Old Ballroom for exceptional wood carvings and plasterwork throughout. You might even run into Peter Estlin himself.
Walbrook EC4N 8BH

You wouldn’t usually want an invite here. The Old Bailey has been London’s principal criminal court for centuries. Now a crown court centre, it hears cases from the City of London and the Greater London area, and those remitted to it from England and Wales. The figure of Justice standing commandingly above the streets of the City of London is an image familiar to millions, an instantly recognisable symbol from book covers, films and television news. The building she proudly crowns is almost as well-known as she is.
The Old Bailey EC4M 7EH

The Museum of London is creating a new museum in the derelict General Market and adjacent post-war Poultry Market. And for the first time in 20 years, they are inviting the public to explore these spaces in historic and creative Smithfield. See what this space once was, is now and what it is set to become. It is ready for a total overhaul. Be sure to get here early though as they do expect long lines. Tours will run every 30 minutes between 1pm and 4.30pm both days.

Each of the tours is run by someone with a special connection to the market – architects, designers, engineers, project managers, curators, archaeologists, conservators and market traders. And the other three buildings which make up the rest of Smithfield Market are also opening up for tours. If you can’t make it into the Museum of London tours, then run around to these.
Grand Avenue, Farringdon EC1A 9PS

The City of London is jam packed with liveries representing just about any new and old industry out there. And the super old ones have their very own heritage halls which are usually rented out for weddings and private events. Now, you can venture into each old building, exploring their gardens and rooftops. Among those participating this year are Cutlers’ Hall, drapers’ hall, Fishmongers’ Hall, Clothworkers’ Hall, Salters’ Hall, Watermens’ Hall, Butchers’ Hall, Carpenters’ Hall, Painters’ Hall, Apothecaries’ Hall, Stationers’ Hall, Leathersellers’ Hall and Wax Chandlers’ Hall. Yeah, there are a lot!
Various Locations

This fully restored historic Grade II* listed building combines elements of the Arts and Crafts and Art Nouveau styles, but the influences of Townsend’s interest in Romanesque and Byzantine architecture can be seen in the broad semi-circular arched entrance, twin roof turrets and mosaic interior floors. Don’t miss the impressive library within.
230 Bishopsgate EC2M 4QH

The Temple Church is one of the most historic and beautiful churches in London. Here are eight hundred years of history: from the Crusaders in the 12th century, through the turmoil of the Reformation and the founding father of Anglican theology, to some of the most famous church music in London. This is made for history buffs.
Temple EC4Y 7BB

The top outdoor cinemas around the City of London

Where to watch Wimbledon 2022 in the City of London