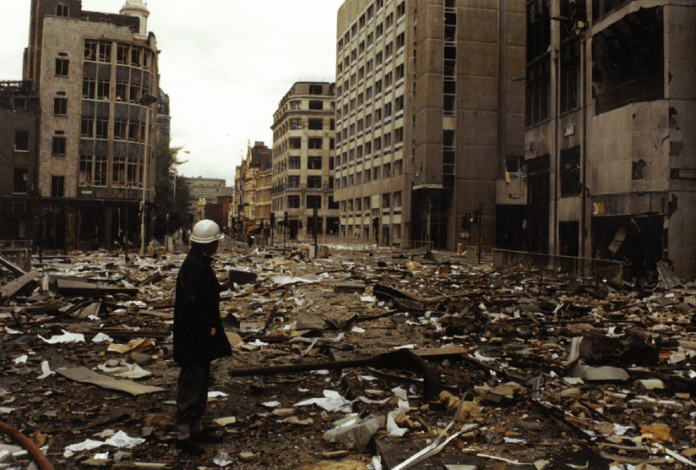 CITY police officer Jonathan Bish was getting ready for an afternoon shift on 24 April 1993 when he learned the IRA had detonated a massive bomb on Bishopsgate, killing one person, injuring 44 others, and causing £350million worth of damage.

Thankfully, it was a Saturday and police had managed to evacuate most of the area beforehand, or the number of casualties could have been catastrophic, but as Jonathan started his shift on mobile patrol, he got a front row seat to one of the most devastating events in the City’s history.

“It was difficult getting into work because everything was blown up,” he remembers of that morning, exactly 25 years ago this week. “My function that afternoon was going out on mobile patrol, and I just remember thinking ‘well there’s not much left of the City to drive around really’.”

The bomb, which contained one tonne of explosives, exploded at 10.27am from inside a stolen Iveco tipper truck parked outside the Hong Kong and Shanghai Bank at 99 Bishopsgate.

Buildings within a 500-yard radius were extensively damaged, including the NatWest Tower and Liverpool Street Tube station. St Ethelburga’s, a Grade I-listed medieval church that had survived the Great Fire and the Blitz, was completely flattened.

By the time Jonathan started his shift, scores of emergency services crews had descended on the scene.

“It was very much a search and rescue effort for my colleagues in the fire and ambulance service but I didn’t get involved in that because normal policing has to carry on around that kind of devastation,” he says.

“I remember being very busy because people get jumpy and they call all kinds of things in.”

In the hours and days after the bomb went off, the phones at Wood Street Police Station rang off the hook with civilian reports of vehicles parked at odd angles, suspicious packages in the street and all manner of strange behaviours. The City was on edge, understandably so.

“I can’t remember being scared, you were more cautious,” Jonathan said. “It was an era when you just got used to it – sort of like during the Blitz I imagine – you got used to it and you got on with life.”

The IRA’s explosive campaign for Northern Ireland’s independence from British rule had come to define Jonathan’s career from when he’d started on the City Police force in 1982; a former office worker on the hunt for “a bit of adventure and excitement”.

Just over a year before the Bishopsgate bomb, the group had been responsible for a similar explosion nearby at the Baltic Exchange on St Mary Axe, killing three people and injuring 91 others.

“That St Mary Axe bomb was probably the biggest impact for me because it was the first time on mainland Britain we saw what a large bomb did,” Jonathan says.

“Up until then we hadn’t seen it first hand, it was something that didn’t happen… to actually walk around the City and see it blown up by such a large device, the devastation – it was a game changer really.”

The government’s response to this second attack on Britain’s financial centre was to order a security ‘Ring of Steel’ around the Square Mile. Most roads in the City became exit-only, with the eight routes in guarded by armed police and monitored by CCTV cameras.

There were changes to policing too. For Jonathan, the most significant was having to carry a firearm on every shift – armed teams didn’t patrol 24/7 back then like they do now – and pioneering new tactics that were to form the basis of anti-terror policing in the UK.

“We went out in convoys hunting terrorists, we set up roadblocks with armed officers, we put spotters out in plain clothes, we had pursuit vehicles to chase down vehicles that had turned around or changed their course because of our presence – we were the lead in the UK.”

As the threat lessened, the extra measures were scaled back – Bishopsgate was the IRA’s last major bombing in mainland Britain before a temporary ceasefire was declared – but the experience equipped officers with the skills to approach counter-terror policing on instinct.

“You go to a call, you listen to the information, you ask probing questions, you assess, you stand back, you think ‘what could this be?’. You don’t just roll in there thinking ‘oh no, someone’s just left their suitcase there’, or ‘this is just someone who’s parked inconsiderately’, you have to go in thinking worst case, and then things can only get better.”

It’s a skill set that was to come in handy throughout Jonathan’s 40-year career, and then again when he rejoined the force as a civilian staff member. He was supervising the control room at Wood Street on Saturday 3 June 2017 when three terrorists in a van mowed down pedestrians on London Bridge and then went on a stabbing spree in Borough Market, killing eight and injuring 48.

The attack, and others in Manchester, Westminster and Finsbury Park last year, prompted the force to step up its counter-terrorism policing measures once again, piloting a programme of highly visible and plain-clothes officers trained in behaviour analysis to identify potential terror plots.

The strategy, known as Project Servator, has been rolled out in forces around the country, including the Met and British Transport Police.

Jonathan says that a lot of the tactics employed in Project Servator are an extension of the force’s strategy during the IRA era, however, he admits the threat is now very different.

“In the IRA days, they would try not to kill people… they had the courtesy to call in and use the codeword.

“Sometimes they got things wrong – the bombs went off prematurely, they got locations wrong, they gave warnings too late – but it was terrorism within rules.

“Now, of course, it’s anything goes. They want to maim and kill as many people as possible.”