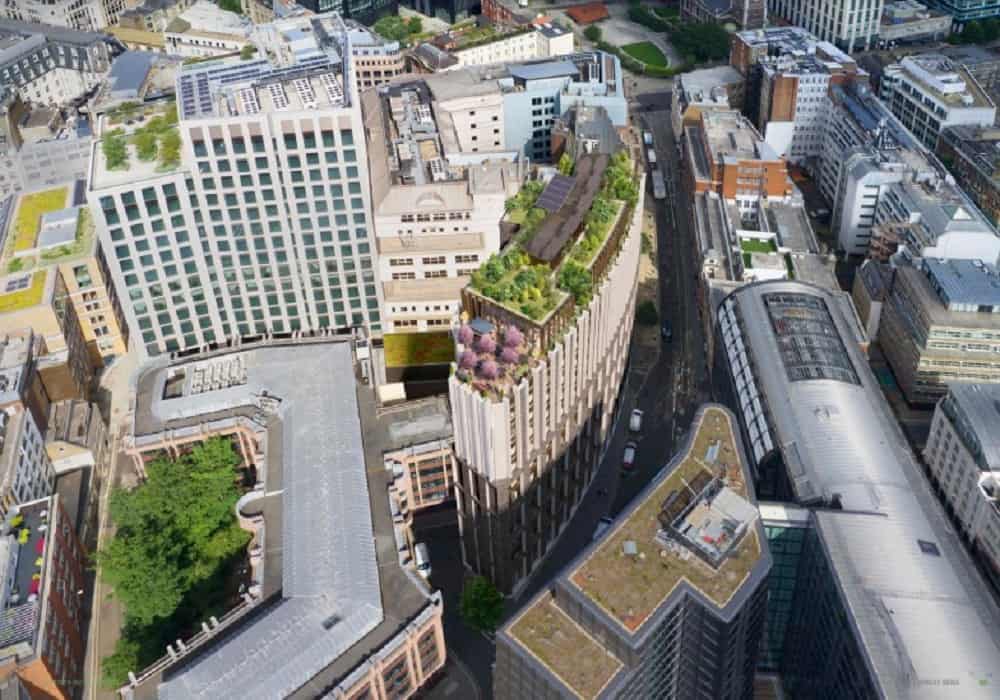 An old office block is set to become a luxury hotel with a rooftop cocktail bar and “sky forests”.

A developer wants to transform a 1950s office block in the City of London into a 300-room hotel.

The plans include renovating the eight-storey office block into a 14-storey building with 311 bedrooms.

If it goes ahead, there would be a bar, restaurant, bakery and coffee shop on the ground floor and a cocktail bar with clusters of trees on the top floor.

The site is a short walk from Aldgate and London Fenchurch Street stations.

A planning report describes the development as: “An opportunity to re-imagine this area as part of the new 24/7 City and reposition the currently ill-defined neighbourhood as a vibrant urban quarter.”

Designed by architects David Bonnett Associates, the new hotel would feature an outdoor bar on the 14th floor surrounded by trees.

The report describes it as “a striking green crown on the skyline” that will reduce local air and noise pollution.

It adds: “To soften and green a hard inner-city environment currently severely lacking in landscaping, the rooftops will be “urban sky forests” planted with new trees.

“These trees are a carefully curated selection of native species selected for their resiliency and biodiversity benefits.”

Ploberger Hotel Group is an Austrian company owned by Christian and Rudolf Ploberger, with two hotels in Prague and one in Austria.

The company was given planning permission to redevelop Bow Street Magistrates Court and Police Station into a 100-room hotel with restaurants and bars.

Another report says: “The Ploberger Hotel Group therefore have longstanding experience in both the development and operation of hotels and are committed to bringing forward a high quality hotel on this site.”

The City of London Corporation’s planning committee will consider the plans in due course.