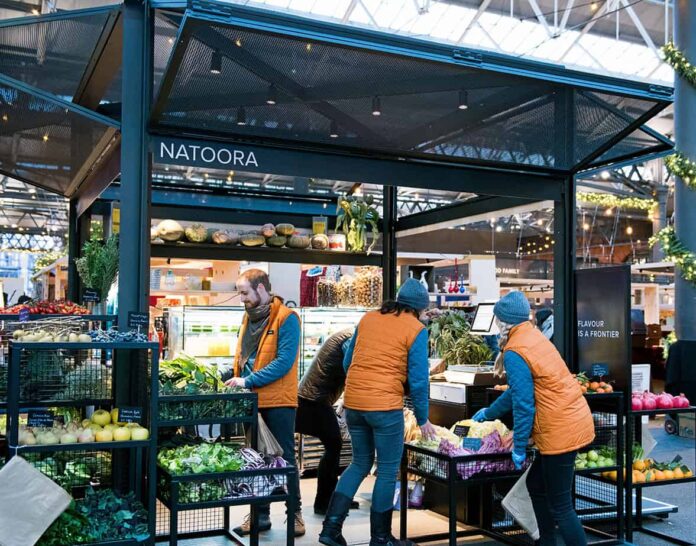 The move marked the end of an era for fresh produce in the East End, which had been sold on the site under various guises since it was established as a market for “flesh, fowl and roots” by decree of King Charles in the 17th century. Shopping at the market in recent times was far more likely to yield knock-off sunglasses than sunflowers, but a new revamp of the stalls and food units from architects Foster + Partners has drawn at least one new purveyor of fresh produce back into the fold.

Specialist fruit and vegetable supplier Natoora has snapped up a prime position at the entrance to the market, in what will surely trigger a wave of deja vu for shoppers who remember way back when you could pick up sacks of potatoes, punnets of bright juicy strawberries, and bananas by the box.

Natoora works directly with independent growers to source rare and heritage fresh produce to supply households and more than 400 restaurants across London, as well as in-house prepared food to go.

For a company that began as an online farmers market operating out of offices on Bethnal Green Road in 2005, the move was celebrated as ‘a coming home’.

“Our Spitalfields store very much feels like a return to our roots,” says founder Franco Fubini.

“The market has been in a bit of flux for a number of years, but it has such a rich heritage and this revamp seems like a really exciting way to get it back on track.”

Physical retail spaces are now a top priority for the former Internet start-up, which also has stores in west London, with bricks and mortar seen as key in their mission to spread the word about seasonality and sourcing practices that make great-tasting fruit and vegetables.

Recent in-store campaigns have covered everything from global labour forces, to fruit scarring, to the benefits of growing vegetables in the dark.

“We are very much about educating our customers and we believe the best way to do that is by being on the ground and being able to directly reach out to people,” Franco says.

“It’s particularly exciting to do that as part of a community that is very much the creative hub of the City.”