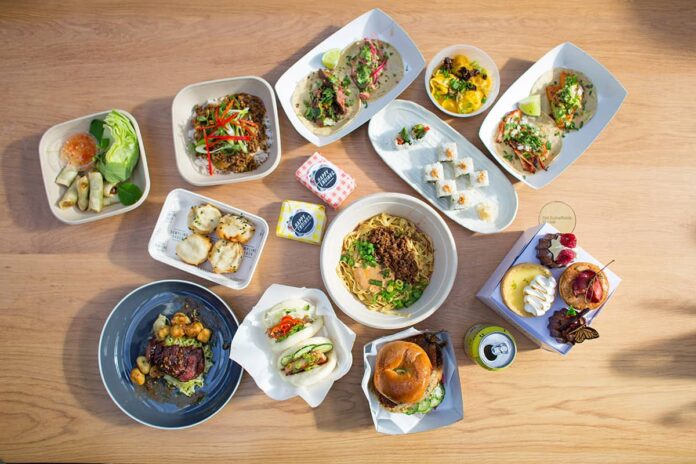 Tourists might flock to Spitalfields Market for kitschy crafts and vintage leather, but for most people who live or work in the East End, the historic market has become a day-to-day destination for stuffing one’s face.

Well, Spitalfields’ culinary credentials just went from strength to strength with the opening of The Kitchens, a central hub of – you guessed it – kitchen units, now home to a fresh new line-up of food traders operating seven days a week.

The first stage of a broader revamp of the market to be unveiled in the spring of 2018, The Kitchens has been designed as fully functional units for emerging food traders looking for their first bricks and mortar site, as well as more established brands seeking space to test out their new offerings.

Chef Nuno Mendes, who heads up Taberna do Mercado on the edge of the market, as well as Marylebone celebrity hotspot Chiltern Firehouse, is one half of the duo behind the curation of kitchen traders together with hospitality consultant Stephen Macintosh.

The pair say their vision was for the new market to become a hub for creative and entrepreneurial talent while serving the local community, which is why striking a balance between big names and up-and-comers was so important.

“In an age where retail is becoming much more impersonal and en masse, we want to re-establish that unique connection between traders and consumers, creating a more rewarding and personalised experience.”

Here’s a taste of what’s on the menu: 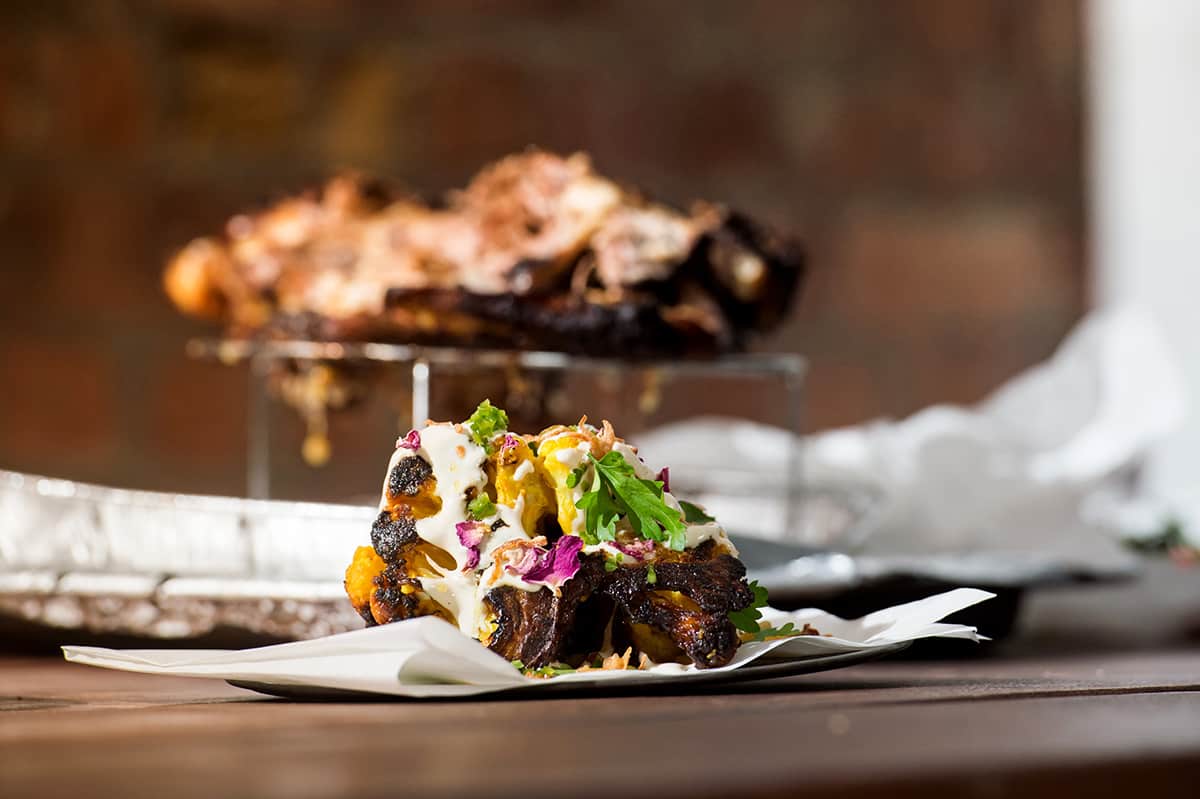 For the uninformed, shawarma is a hunk of slow-roasted meat thrown into a pita with veggies, spices and sauces. But if you’re thinking that sounds like your average post-pint grub, you obviously haven’t set foot in Haggerston grill house Berber and Q, or its sibling shawarma bar in Exmouth Market. In Spitalfields, founders Josh Katz and Mattia Bianchi seem to have created a combination of the two; maintaining the focus on Middle East and North African flavours, but getting creative with a few new dishes like the rolled shoulder of lamb mechoui, blackened chilli sauce, and bread and butter pickles on flatbread.

Broadway Market dumpling masters John Li and Yee Li have a loyal army of followers chomping at the bit for their pillowy soft parcels, and if the queues at Spitalfields on opening day were anything to go by, their first foray into the City needs no introduction.
Roll up for Shengjianbao, Shanghai-style pan-fried dumplings filled with flavour-packed soup (above right), or the lesser-lauded but still delicious hand-pulled dan dan noodles, a Chinese street food classic.
facebook.com/dumplingshack

From taco truck at Hackney’s Street Feast to two permanent restaurants in Clerkenwell and Soho in under 12 months, Breddos and their tacos are on a hot streak and they’re bringing it back to East London. Expect all your chicken, beef, and fish favourites from Breddos’ brand of Tex Mex made with the best of British produce but get ready for a Spitalfields exclusive; BBQ duck, tamarind, piloncillo and burnt onion.
breddostacos.com

Japanese small plates and great DJs have made Dalston’s Brilliant Corners a firm favourite after dark, but founders Amit and Aneesh Patel have geared their offering more towards the lunch crowd with their second venture at The Kitchens. Carnivores are covered with smoky, sticky yakitori cooked over charcoal and maki rolls, but chefs actually put vegans first on the menu with a slew of creative options, right down to vegan sushi rice and tahini dressing.
It’s all made using traditional techniques so worth ordering to eat-in at the bar to watch the chefs at work.
brilliantcornerslondon.co.uk

The sole Italian offering in The Kitchens will be dishing out its signature, fresh, handmade pasta dishes like amatriciana and radicchio, gorgonzola tortelloni for when only carbs will do. This is the first permanent home for the Hackney-born supper club, which has developed a loyal following among East Londoners for its famous panzerotti; a small deep fried calzone. They are also operating as your new favourite Italian deli, selling burrata, cheeses and cured meats.
soodfamily.net

Tofu-weary vegetarians and tofu-wary meat eaters would do well to stop by this new venture from Hugh Thorn and Luke Clarkson, who are dishing up a varied menu of Asian food, among which Mapo Tofu plays a starring role. This Sichuan classic comes with either beef or veg plus an optional beef brisket topping, and is probably one of the best bean curd-based meals you will ever eat.
bar-barbarian.com

Nordic is the name of the game for restaurateur Matt Young, whose Rök restaurants in Islington and Shoreditch dish up their meats smoked and veggies pickled. Spitalfields’ offering is more takeout friendly, but no less flavour focussed, with the likes of crispy herring bagels packed with pickled onions and cucumber and dill sauce on the menu. Matt is big on preservation and will be pickling just about everything British seasonal produce as well as experimenting with his own home-brewed mead, fennel wine and cider.
roklondon.co.uk

Not technically part of the 10, but one of the first of many food retailers to set up shop in the stalls ringing The Kitchens, Bobby’s East Anglian Oysters aim to shine a light on varieties from lesser-known waters. Essex boy Bobby Groves, who also runs the oyster cart at Chiltern Firehouse reckons his crop from the likes of West Mersea, Maldon and Orford rival those of Whitstable and Carlingford, and based on our own extensive research, we would say he’s probably right. Juicy, sweet and best enjoyed with the local craft brew.
eastanglianoysters.com

Brighton-based pub pop-up Flank has arrived in the big smoke to show Londoners how nose-to-tail is done down south. Enigmatic young chef Tom Griffiths will be getting creative with bits of beef cooked low and slow or seared over fire, prepared with an array of seasonal ingredients. Make the slow-cooked aged beef braised over fire in offal ragu, and a side of cauliflower cheese first on your must-try list.
twitter.com/tomgriffchef 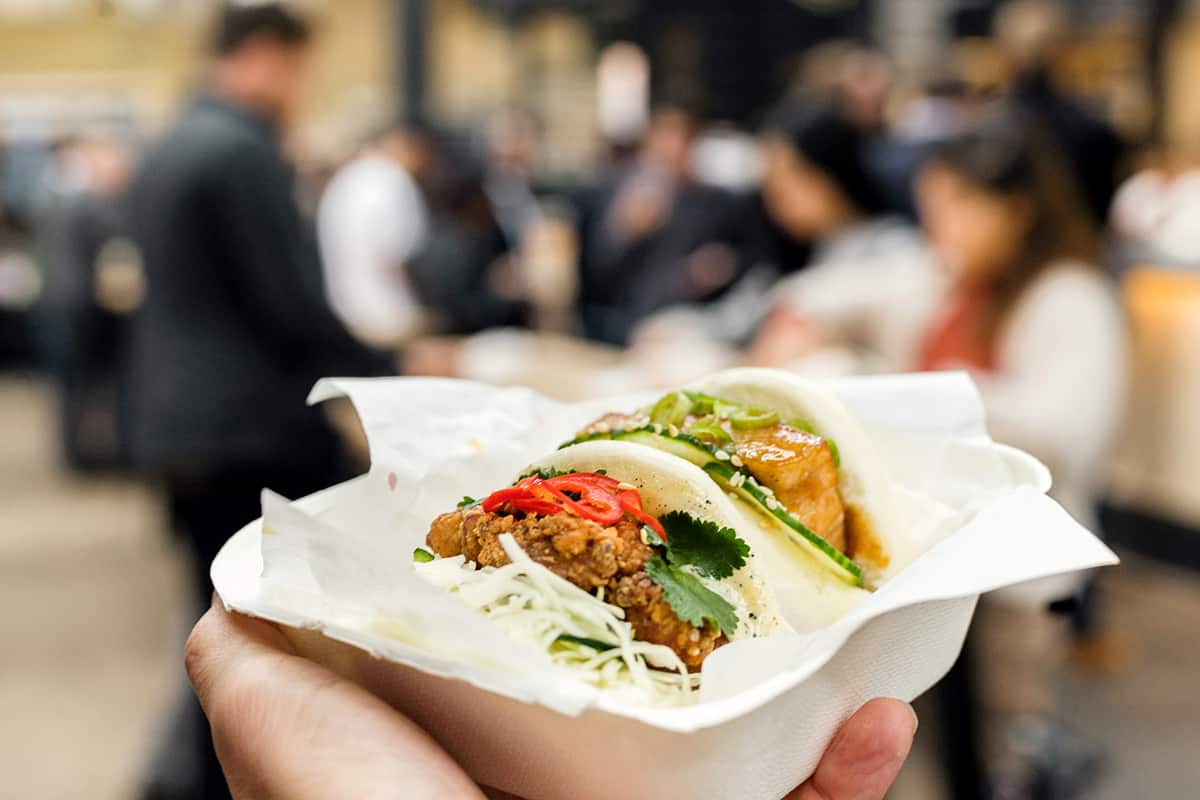 Another Broadway Market native, these steamed bun specialists stuff their light, pillowy buns with a rotating menu of creative meat and veg-based combinations, but the slow-roasted pork belly with cucumber, spring onion, hoi sin sauce and special sauce usually wins the taste test. If you’re in the market for a new obsession, however, try the spiced fried chicken, salted celery slaw and szechuan mayo bun, a Spitalfields exclusive.
yumbun.com

All good things must come to an end, but desert experts Happy Endings will put a spring into those last few steps back to your desk with their artisanal ice cream sandwiches. The Strawberry Shorty combines strawberry, marshmallow and chocolate shortbread, while The Malty One is a hunk of creamy malted milk ice cream squished between oat biscuits and dipped in chocolate – delish. Wash it all down with iced-lolly cocktails for a sugar-hit that will last the afternoon and well into the evening.
happyendingsldn.com