After what seems like forever, the Aldgate Square project is finally approaching its completion.

Several years of major construction (pictured)and a complete redesigning of the local road system is about to culminate in Portsoken becoming home to one of the largest open spaces in the Square Mile.

The new square will become the centrepiece of a recent drive by the local authority to significantly improve the public realm around Aldgate, with smaller schemes nearby including the landscaping of Mitre Square outside Sir John Cass’ Primary School and the landscaping works currently being undertaken in front of Artizan Street Library. The area is certainly looking a lot smarter than it did a few years ago.

The pedestrian subways of Aldgate, always pretty sketchy with their scent of stale urine and an air of mild menace, are now thankfully mostly gone.

This is good, although I think the City missed a trick in not filling in the pointless subway underneath Goodman’s Yard when they were doing all that work on Minories at the very start of the Aldgate Square Project.

Instead, this grimy tunnel inexplicably remains in place, locked up and redundant, with a much handier pedestrian crossing at exactly the same location.

With respect to the square itself, I reckon it’s going to be good on so many levels. St Botolph’s Church gets to reclaim a large section of its ancient churchyard that was unceremoniously chopped off and buried under asphalt for decades following the previous generation of City planners deciding to install the absolutely horrible Aldgate Gyratory road system.

The gyratory is now happily gone, consigned to the realms of bad and misguided ideas from the mid 20th century. Now we have a situation where previously busy roads are replaced with a traffic-free area where people can relax and socialise.

The newly expanded churchyard gardens look great behind their brand new wrought iron railings.  Also very easy on the eye is the re-designed south entrance to St Botolph’s, with the tired and dated ‘crazy paving’ ripped up and replaced instead with smart Yorkstone paving and Portland stone seating.

The astute amongst you may also have noted the recent addition of a new floodlight system that illuminates the front of the church during the hours of darkness. It looks great.

Then there is the intriguing Portsoken Pavilion in the middle of the square. Looking like some alien spacecraft, its design is certainly pretty striking.

Anybody familiar with the City’s Information Centre outside St Paul’s Cathedral will recognise obvious similarities with the pavilion building, with both having been designed by Make, the award-winning architectural firm.

However, perhaps the most intriguing element of the new pavilion is not the fantastic building itself, but rather the tenants who have been chosen to occupy it. I had a horrible, nagging feeling that the Corporation would play it safe and award the lease to run the new community café to yet another bland, corporate chain.

This would have been a travesty, given the extent to which such establishments are already ubiquitous in the City.

But the City of London Corporation has made the impressive decision to do something quite different. I was really pleased to learn that the people tasked with operating the pavilion café are to be Kahaila, a not-for-profit charity fighting for social justice for marginalised groups of women.

Their work includes mentoring and helping to rehabilitate female prisoners, providing training and employment opportunities to vulnerable women, and providing a safe sanctuary for victims of sexual exploitation.

Kahaila already runs another popular café in Brick Lane, with all profits from their business ploughed into their various charitable projects.  This is great to see, and the Corporation should be thoroughly commended for this decision.

Nothing’s ever perfect, though. The segregated north-south cycle path planned to run through the new square doesn’t seem to have been thought out particularly well.

Given the volume of cyclists that will be using this facility during the rush hour, they are bound to come into conflict with oblivious pedestrians who don’t notice the shared use signs.

This was an opportunity sadly missed to build proper, completely segregated cycling infrastructure to help those on two wheels to safely access Jewry Street and Houndsditch from Aldgate Square.

Just compare this with the excellent, fully segregated cycle lanes installed by Transport for London a few hundred yards further on in Whitechapel High Street and you will see what I mean.

Nevertheless, in spite of this important omission I want to finish by saying that I am really looking forward to the opening of Aldgate Square later this year. I can really see this becoming a natural hub for the Portsoken community.

For this, the City of London Corporation certainly deserves a big ‘thumbs up’ for a job that was (nearly) perfectly executed. 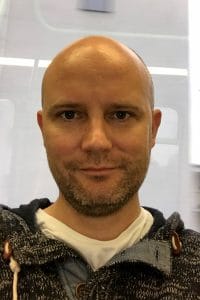 Ian McPherson  is a City of London Guide who lives on the Middlesex Street Estate with his partner and young daughter.