OVER the last couple of years the Mansell Street Estate has had a cloud hovering over it. No, I’m not referring to the British weather; I’m referring to the ever-looming prospect of redevelopment.

Redevelopment is considered a dark cloud by some, stealing away from the light and bringing about dark days. For others however, every cloud has a silver lining.

The sight of the community hall being filled to the brim during residents’ meetings became commonplace. The threat (or opportunity) of redevelopment drew residents in droves, the sheer number of people unparalleled to other meetings.

Polarised views meant that everyone wanted a word. The community hall proved far too small for such large numbers and, indeed, for such incessant opinions, all of which, of course, were valid, sincere and legitimate.

During these meetings I recall looking around the room and reading faces. Some were riddled with worries whilst others simply drew a blank expression, trying to understand what a redevelopment actually means.

Sceptical glances were exchanged. The tension in the air could be cut with a knife. At the end of each meeting the crowds dispersed back into their homes, usually feeling none the wiser on the matter.

So why redevelop the estate in the first place? There are many factors that contribute to this. The most glaringly obvious one is the Capital’s housing crisis.

Redeveloping the estate is consistent with the Mayor of London’s plan for increasing housing. Secondly, the desirable location of the estate means that the land price is high.

The estate is, metaphorically speaking, sitting on a gold mine. Every square metre that’s taken up by the pretty green hills that sit at the back of the estate or by a resident’s garden, is, from a monetary point of view, a waste of land and money. This land could be profitable on a much larger scale.

The third factor is the undeniable need for modernising the flats. It’s been argued that in comparison to the rest of the City, the Mansell Street Estate looks derelict.

The failed attempts to gain an understanding of the residents’ needs and simply hear them out have left them with an endless list of questions.

What does a redevelopment mean? How can we be sure that the residents don’t lose out? How do we know that the outcome will be for the better?

In comparison with other newer housing estates, particularly those that have been ‘regenerated’, the estate is quite low density. This is what makes the Mansell Street Estate an agreeable place to live in.

Therefore the question raised is, is it really necessary to pull down the whole estate, or should there be investments made to maintain it at a higher standard and improve it?

To the developers it’s perhaps trite to air the concern that the community feel will be lost but for residents, this has been the number one concern, something we don’t expect developers to fully appreciate.

A residential tower block takes away much of the community feel. Friendships formed with neighbours from the same floor for decades should not be underestimated.

These aren’t just friendships; they are now the essential structure of a sophisticated support network built over years of trust and bonding.

At present, residents are afforded vast amounts of communal space which means that children and adults alike have an enjoyable recreational space, namely the playground that’s located at the centre of the estate.

Architects have proposed many options for alternatives, one of which included having the children’s playground on the roof – needless to say this was a suggestion that residents did not take a liking to.

It is this very approach to ‘consultations’ that leaves residents wondering whether it really is their best interest at heart. The needs of the community should be understood prior to the proposals, not after.

In this estate the relationship with redevelopment has been on-again, off-again and as it stands, because of Brexit uncertainty, it’s reached an impasse. The meetings in the community hall have resumed with the number of attendees dwindling down to a feasible number.

Residents are going about their daily lives as normal, that is, until the cloud of redevelopment hovers over us once more. 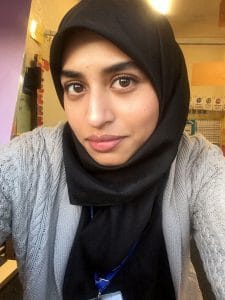 Sharmeen works as a teacher in Tower Hamlets and has lived on the Mansell Street Estate for over 25 years.