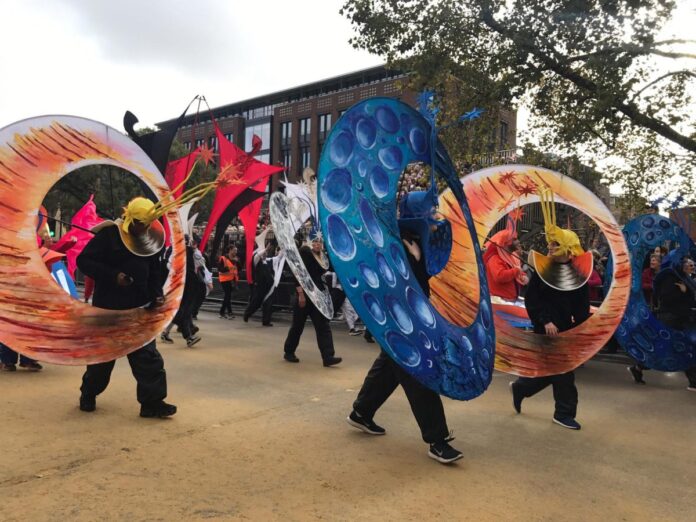 Thousands of people lined the City of London to join in the celebrations as centuries-old tradition met modernity at the Lord Mayor’s Show.

Peter Estlin became the 691st Lord Mayor of London on the weekend, and has an ambition to help champion the digital innovation transforming the way people work and live.

He has taken ‘Shaping Tomorrow’s City Today’ as his theme for the year.

He said: “As a pioneering nation, we have the opportunity to shape this agenda internationally, and today is a step in that direction as we celebrate and shine a spotlight on those organisations making this happen.”

The show has its origins in 1215 and is designed to ‘show’ the new Lord Mayor to the people of London.

This year, 7,000 people participated, together with 200 horses and 140 motor and steam-driven vehicles.

The procession included children from the City’s schools run by the Sir John Cass’s Foundation, as well as the Corporation’s apprentices and staff celebrating diversity.

The City’s worshipful and livery companies, representing ancient and modern trades such as insurers and glove-makers, marched three miles through the streets in a ceremony organised Pageantmaster Dominic Reid.

There was also a large military presence with  the London Regiment and 256 (City of London) Field Hospital RAMC among those joining the parade.

The theme of remembrance was also in evidence as London marked the centenary of the end of the Great War.

There was a departure from tradition in one way, however.

According to Bishopsgate Deputy Tom Sleigh, this is the first year since 1634 that the sun shone for the Lord Mayor’s Show.

The ceremony started with the Lord Mayor’s departure from his official residence at Mansion House before he released 691 doves to mark the continuity of tradition.

He then proceeded through the City in the Lord Mayor’s Golden State coach to the Royal Courts of Justice where he swore allegiance to the monarch.

This mayoral year will encompass the UK’s departure from the EU in March, and the new Lord Mayor said he will be promoting business both at home and internationally.

“My focus will be on our financial and related professional services, as well as our new emerging industries that are shaping our future.”

He said he wanted to raise awareness of the need to be digitally savvy and help more young people get work experience and a chance to pick up new skills, while making sure that people across the community are not left behind.

This year the spectacular fireworks display which ends the celebrations was cancelled after police said there was a risk of attack by terrorists.

Chief Inspector Wright told the Corporation’s policy and resources committee there was a risk of people getting crushed as they tried to leave, and more than an extra 100 police officers might be needed to protect the public.

The 20-minute firework display had become a traditional part of the Lord Mayor’s Show, with road closures on Waterloo and Blackfriars Bridge allowing thousands of spectators a clear vantage spot.

City street sweepers brought up the rear of the procession to start the clean up immediately after the celebrations.