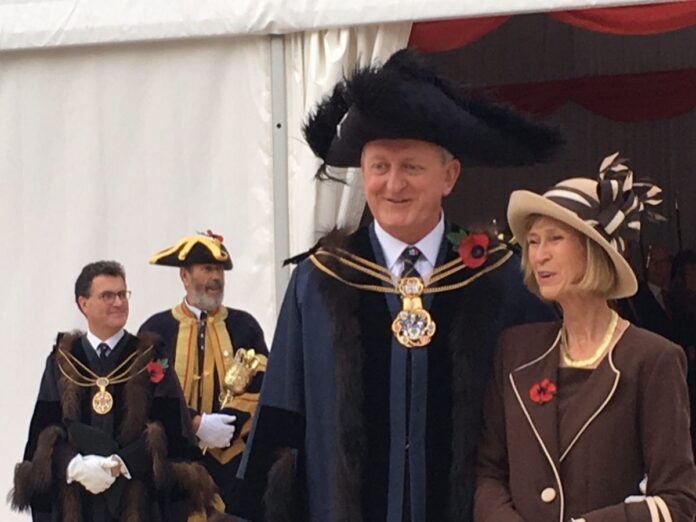 Dignitaries gathered at an historic Silent Ceremony to welcome the 691st Lord Mayor of London to his new post.

The event in the Great Hall at the City of London’s headquarters was held in silence, apart from the moment new Lord Mayor Peter Estlin took his oath.

He arrived at the Guildhall flanked by police motorcyclists for the centuries-old ceremony.

The event started with a meeting at the Alderman’s Court before the Lord Mayor elect joined the gathering of aldermen, common councillors, sheriffs and other dignitaries and invited guests to swear his oath of office.

The outgoing Lord Mayor, Charles Bowman, summoned him to his seat, and the new Lord Mayor donned his tricorn hat as his predecessor removed his to signal the transfer of power.

After he left the Great Hall, the bells of the nearby  Lord Mayor’s church, St Lawrence Jewry, pealed out.

Following the Silent Ceremony at @GuildhallLondon, the 691st @citylordmayor Peter Estlin is welcomed by media and well-wishers in Guildhall Yard. pic.twitter.com/uuZK6Jb9ns

Among the guests were members of the Onside Youth Zones charity which is opening centres in London.

They are participating in the procession of floats at the Lord Mayor’s Show and were due to present him with an honorary membership card and a photograph.

This year’s Lord Mayor’s Show will not feature fireworks on the advice of the City of London police.