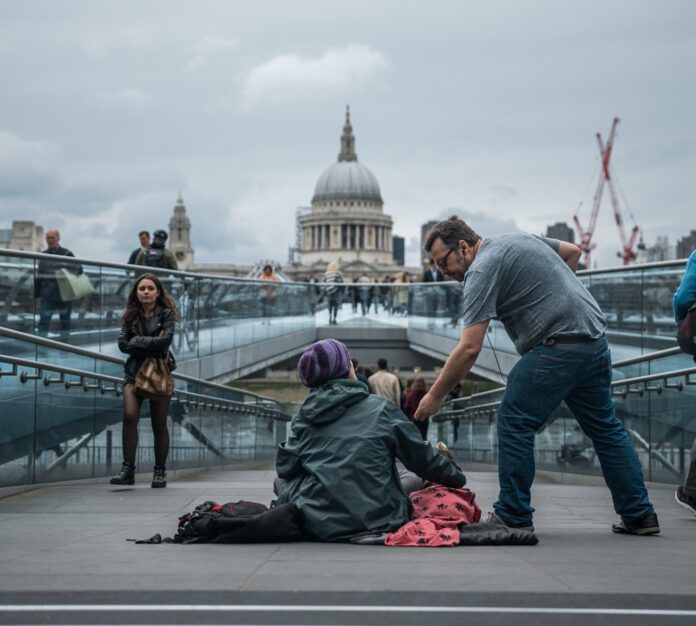 Sadiq Khan has called on Londoners to show their generosity to the Winter Rough Sleeping Fundraising Campaign to help homeless people off the streets which launched on Wednesday.

Last year, the Winter Rough Sleeping Fundraising Campaign raised more than £100,000 for homelessness charities Depaul, akt, Centrepoint and the New Horizon Youth Centre, all four of which will once again benefit from donations this year.

During the pandemic, more than 2,500 rough sleepers have been helped into City Hall-provided accommodation, 86 per cent of whom did not return to the streets.

But Sadiq Khan has warned the Government to “wake up” to the scale of the homelessness crisis and has called on ministers to fulfil the Government’s manifesto commitment to end rough sleeping by 2027.

NOW READ: Fining passengers who refuse to wear a facemask on the Tube will boost compliance

Khan said: “From City Hall we are doing everything we can with the resources at our disposal to keep rough sleepers safe and I’m confident Londoners will once again show their generosity by backing my winter fundraising campaign and helping to support young Londoners who find themselves homeless.

“Even so, the generosity of Londoners alone cannot end rough sleeping in our capital. This time last year we were hailing the remarkable success of the ‘Everyone In’ programme for saving the lives of hundreds of vulnerable Londoners. Despite seeing what can be achieved when we work together, ministers now appear unwilling or unable to confront the appalling reality that hundreds of young Londoners could spend this Christmas sleeping on the streets.”

The Mayor of London has said that Government policies around immigration and cuts to benefits are undermining efforts to tackle rough sleeping.

The Department for Levelling up, Housing and Communities has been approached for comment.

Although the number of rough sleepers in London has fallen by around 37 per cent in the past year, the impact of the COVID-19 pandemic on homelessness has been felt most harshly by vulnerable Londoners.

Between June and September 2020, the number of rough sleepers under the age of 25 increased by almost 50 per cent, while the number of young women sleeping on the streets doubled.

Sadiq Khan marked the launch of the Winter Rough Sleeping Fundraising Campaign on Wednesday morning with a visit to a youth rough sleeping support service in Hounslow.

The service, which was part-funded by donations from last year’s appeal, is run by teams from Depaul and New Horizon Youth Centre and has helped 77 young people into permanent accommodation since it launched in March.

Depaul UK CEO, Mike Thiedke said: “Every day, more young people become homeless in London and unfortunately we’re seeing an increasing number of them ending up on our streets.

“We are facing a crisis of youth homelessness and are thankful to the Mayor for recognising the particular needs of young people and choosing them as the focus for his winter campaign.”

Londoners can donate to the appeal by using “TAP” contactless points in shops, stations and cafes across the capital or by donating directly on the TAP website.

Digital billboards around London promoting the campaign will also feature a QR code which, if scanned by a smartphone, will allow people to immediately donate £3.

Londoners are also being encouraged to download the Streetlink app, which allows users to contact outreach workers who will come out to support anyone sleeping rough in the capital.