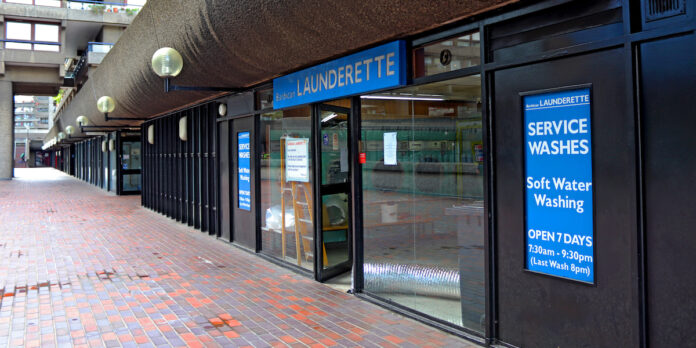 When the Barbican Launderette closed recently a scare went out that it had got the axe and our washing would need to be done elsewhere from now on.

The launderette is much-valued. It is a social hub, a great place to go to read, to chat and to get your underwear smelling fresh. It is warm, cosy and welcoming. And the nearest alternative is a bus-ride away.

So a fevered discussion took place one evening over a bottle of pinot grigio as to how residents might enact a takeover.

The assembled crew believed that the launderette was the perfect place to launch a people’s coup and convert the premises into a dual-purpose social enterprise. A laundry plus coffee shop was the most popular proposal, the idea to turn it into a launderette-cum-singles bar being deemed just a bit too niche.

When it emerged that the launderette had only closed temporarily for asbestos removal work to proceed, the conversation moved on to how residents might nevertheless run a community laundry, and where it might be located.

There are a number of ‘hidden’ rooms around the estate and in earlier years most of the apartment blocks each had a laundry room in the basement and a strict time-slot booking system in operation.

Barbican residents were said to be furious that Golden Lane residents were afforded a facility they were denied. I went in search of the room’s hinted location in my own block, Basterfield House, but all I found was a long white empty cavern where poisoned mice go to die, so the ex-laundry’s whereabouts remains a well-kept secret.

Another well-kept secret is that the Golden Lane Estate, as well as being in the City ward of Cripplegate, is part of the ancient parish of St Luke’s.

This is good news because it means Golden Lane residents can become privileged members of the St Luke’s Community Centre on Central Street (slpt.org).

This gives them access to some of St Luke’s’ fantastic services and activities free or discount rates. For members, Summertime day trips to seaside locations such as Whitstable, Broadstairs and Hastings cost just £8.

Full disclosure; I sit on a User Committee St Luke’s representing the ‘Men’s Shed’: we specialise in playing snooker, brewing beer, and banter.

On Friday 20 September St Luke’s will host its official ‘Back to School Party’ (4pm-6pm), then for grown-ups in the evening (6.30pm-10pm) a luxury ‘Cretan Supper Club’ (£20) held outdoors in the greenhouse using ingredients from the centre’s Edible Yard. Greek wine or Ouzo will be served on arrival.

One of the biggest happenings recently at St Luke’s was the announcement that a new accessible minibus has been bought and will be delivered in October.

Every morning, the St Luke’s bus cruises the neighbourhood to collect members who suffer poor mobility, depositing them at the centre and deliver them home again later.

It was during one such journey that the old bus’s creaking door fell off. It was already a pitiful wreck, so the arrival of a shiny new bus will be greeted with wild cheers.

Also on a happy note is news that Monday 30 September is Doris Day. Veteran of the estate and resident of Stanley Cohen House, Doris McGovern, passed away this time last year. A memorial was held then at the Wesleyan Chapel on City Road, so 30 September is a day of celebration in the Golden Lane Community Centre to give thanks to all the joy she brought us and to unveil a commemorative plaque.

Doris was one of the estate’s earliest residents, arriving in the 1960s with her husband Lawrence and two small boys. They were delighted to have a home with electricity rather than gas lighting, plus hot running water and central heating.

In her later years Doris became a Freeman of the City for her volunteering work, enjoyed the company of her cat Mischief, strolling with friends in Fortune Street park and social events at the estate’s Ralph Perring Club.

She even had a brief brush with celebrity when the actor Stephen Fry popped round for a cup of tea as part of a TV programme (see Stephen Fry’s Key to the City on YouTube).

Doris’s memory lives on even though she is no longer with us, and another local character we will remember for a long time to come is Andy, our neighbourhood Big Issue seller, who died on 2 September.

Written and floral tributes quickly amassed at his pitch outside Waitrose in Cherry Tree Walk. He was good company for many of us and will be sadly missed.

Billy Mann lives in Basterfield House on the Golden Lane Estate. He is a teaching assistant, a City of London Community Builder and a blogger. Write to him at [email protected]