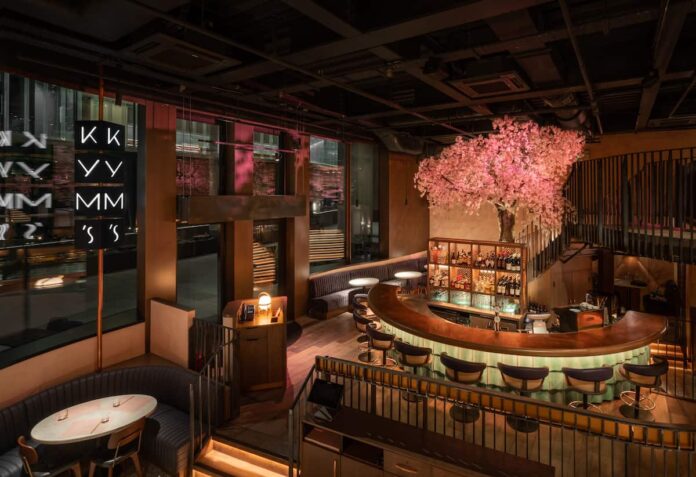 His first venture, A Wong in Pimlico, has held on to its Michelin star ranking again this year. But, while celebrating this victory, he continues to pour even more love and attention into his new Chinese food and drink haven – Kym’s.

Named after the original restaurant that Wong’s parents owned for 27 years in West London, this iteration focuses on a simpler form of Chinese dining. He specialises in all kinds of roasted meats while adding a few traditional dishes from several regions of China. It pays tribute to his family’s old restaurant and the inspiration he has gained over the years from Chinatown.

But Kym’s is located right within London’s newest culinary destination – the Bloomberg Arcade – and so can’t be too homely in appearance.

The restaurant is split over two levels with a fake cherry blossom tree sprouting up out of the bar and arching out over the staircase. It’s all quite glamorous.

Sit up at the bar, beneath the blossoms, and dig into a few of the Asian-influenced cocktails. Go for either one of the Sichuan Sours or the Yuzu Negroni made of yuzu-infused sake, rose vermouth and Campari. They’re simple and elegantly garnished, much like the rest of the Kym’s experience.

While sipping on these beauties, peruse the menu and lurk over to the open kitchen to see what the chefs are cooking up. Watch as the dishes slide over the pass, taking note of those which look the best.

Waiting staff deliver a refreshingly honest wrap-up of the menu, pointing out their favourites. Select about six to eight different dishes between two people and prepare to share.

Like most new laid-back eateries in London, it’s all about tapas-style dining. And we have no qualms with that. It simply means you get to try more of Wong’s creations. Start off with the French bean fritter which acts like a warm and spicy tempura salad. Pair it with rich Sichuanese-spiced aubergines and then get into some of Kym’s wines, each chosen to work well with a wide variety of flavours. They’ll compliment the food, cut the spice and stand out themselves.

And you’ve got to try the mushrooms buns. The fluffy homemade dough encases a hearty chestnut mushroom and cocoa centre which is both sweet and savoury. We just wish we had some sauces or chilli oil to bring it to the next level. Sadly, the tables aren’t adorned with such accompaniments.

But you are spoilt for saucy choices when you get on to the main menu. For instance, the Three Treasure dish, a plate of sliced crispy pork belly, soy chicken and Iberico pork char sui, comes with three perfectly paired dipping sauces.

We held on to these for the rest of the night, adding an extra layer of deliciousness to each dish. The heroes of Kim’s would have to be the meaty mains. The duck and plum pancakes are a real knockout. As are the Xian City lamb burgers. But pull yourselves away from these for a moment to try the puffed tofu soaked in a rich shitake mushroom broth with mung bean noodles. It is a homely and hearty dish that contrasts well against the roasted meats.

And no matter how much food you have consumed, there is always room for dessert. So, get around the Chinatown pineapple bun with custard for the perfect finish.

Basically, it’s a massive doughnut made to shared – or fight over. Proceed to finish off your wine, order an Espresso Martini and call it a night.

The only thing we could have wished for when visiting Kym’s was the chance to try even more food. This can easily be rectified by bringing a bigger group of people down, even if it’s just so you can order a wider variety of dishes.

The dream would be to have one of everything. That way you won’t be jealous of the culinary creations being consumed by your neighbours at the table over. But sadly, this food envy is inevitable at Kym’s.

So, when visiting, listen attentively to the waiters and go with your gut. Feel safe in the fact that no matter what you order, you won’t be disappointed.