The party for the opening of our newly titivated community centre went off in great style, the best moment for me being a sublime performance from the young ukulele-singer Elpida Karali, who delivered her songs straight from the heart.

There was a minor panic when the queue for the paella lunch stretched too far to silence chatter on the health hazards of heating up rice in a microwave, but overall the day was a success.

One of the hot topics for discussion was the estate’s lack of any memorial space for residents sadly departed.

Estate veteran Joan Flannery of Great Arthur House has lobbied on this matter for some time, and with the recent funeral of one of Golden Lane’s best-loved residents, Doris McGovern of Stanley Cohen House, the subject has become urgent.

Some of the estate’s very first residents from back in the late 1950s and early 1960s are still very much alive and active on the estate. But some are sadly no longer with us and it is only right and proper that their lives and times are remembered.

A fitting memorial for our departed residents should be respectful but not too funereally bleak. Blood Swept Lands and Seas of Red, the First World War commemorative installation that graced the Tower of London back in 2014, used hundreds of thousands of ceramic poppies to create a glorious waterfall and huge lake of red and green. Its beauty struck a chord. It was dignified and elegant. It triggered all the right feelings.

The two key memorial spaces we have locally are Bunhill Fields (where you can hang your head in front of ancient tombs dedicated to famous names such as John Bunyan and William Blake) and a wall of plaques at Postman’s Park near the Museum of London roundabout, which commemorates those who sacrificed their own lives in acts of bravery to save others.

Of the two styles of memorial, Postman’s Park is the kind of touchstone that seems more fitting for our estate. In nearby St Luke’s Community Centre on Central Street, they recently introduced a copper-wire ‘Memory Tree’ for members who have passed, and for one recently departed member, Jeanie, an engraved brass plate was attached to the streetside bench on which she sat daily devouring packet after packet of cigarettes.

St Bride’s Church in Fleet Street is famous for its memorials to journalists and has commemorative nameplates on its pews for reporters, photographers and others who made a difference in the ‘rough trade’ of the newspaper industry.

The church is worth a visit regardless of this, but recently I was able to attend a memorial service for a former colleague, Peter Preston, the great editor of the Guardian. Back in the mists of time, he gave me a job and was a guiding spirit for many years afterwards.

What might have been a sombre occasion was enlivened by a speech from Paul Dacre of the Daily Mail, who, as Voldemort to Peter’s Dumbledore, gave a generous tribute.

And there was fun, too. During the ceremony Peter’s two sons, Ben and Rupert, performed a magic trick with a carrot doubling up as a human finger being ‘chopped off’. Then the choir sang the Johnny Cash song Ring of Fire. Bet that was a first.

So a memorial space on the estate needs to strike the right note. I was heartened to be shown a memorial of a different kind recently. Bayer House resident and architecture guru Fred Scott has come up with a blueprint for a memorial bridge based on the fuselage and wingspan of a Second World War plane.

Fred imagines his creation, Air Raid Memorial Bridge, across the Barbican lake. It’s design gives artistic form to the history of the Barbican and Golden Lane as modern solutions to the devastation the area suffered during the Blitz of 1940-41, and is a nod to the many commemorative flypasts which residents get a grandstand view of, the most recent being the celebration for 100 years of the RAF.

The discovery not long ago of an unexploded bomb during the demolition of Bernard Morgan House was also a reminder of where the roots of our homes lie – in the death and destruction of a war that ripped Europe apart.

The post-war renewal in Britain, to put things back together again, is where the stories of the Golden Lane Estate and the Barbican begin.

Golden Lane was an attempt to draw displaced talent back into the heart of London. It originally offered homes to young doctors and nurses at Barts Hospital.

We should never downplay that heritage and we should give proper remembrance to the citizens who played such a large part in forging it.

It is a legacy that is too often forgotten by City decision-makers, and residents feel insulted by that. 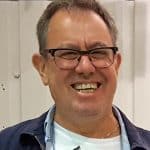 Billy Mann has lived in Basterfield House on the Golden Lane Estate for 24 years. He is a City of London Community Builder and blogs about neighbourhood happenings at basterfieldbilly.blogspot.com. Write to him at [email protected]