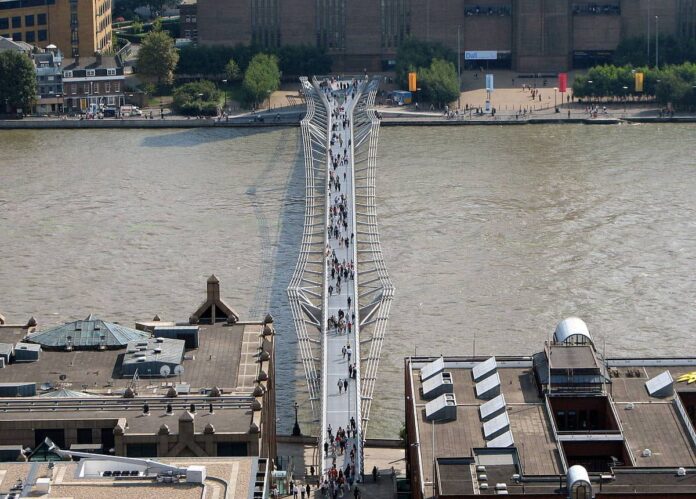 London leaders are growing impatient with police over delays in attaching cameras to bridges over the River Thames, equipment designed to help save the lives of people making suicide attempts.

But police say they will now forge ahead with the project, explaining the revamp of the Ring of Steel anti-terror programme was behind the delay.

The constantly-evolving security cordon approach to protect the Square Mile came about during the 1990s Troubles era when the IRA planted car bombs in the financial district.

The Ring of Steel undergoes regular transformations in tactics to protect the City and its workers and visitors.

Tactics have ranged from narrowed roads and rising street bollards to manned checkpoints and hidden spots for armed police to monitor traffic during high-threat periods.

Over the years it has also led to an expanding CCTV surveillance network, as well as automatic number plate reading technology monitoring traffic.

The river cameras project was proposed in 2016 in response to the number of people committing suicide using the City’s bridges. It was folded into the Ring of Steel’s CCTV upgrades programme due to its potential for anti-terror measures, too.

The estimated £1.4million project would see cameras installed under the bridges to spot and track people in the river, using thermal imaging and advanced analytics technology.

The City manages five of the major bridges over the Thames, including Tower, London, Millennium, Blackfriars, and Southwark Bridges. The proposal came prior to the attacks carried out on Westminster and London Bridges.

Ring of Steel, which included a CCTV review and upgrades, was then paused at the beginning of 2017 and rebranded as a joint programme with the Corporation called Secure City.

A police spokeswoman said the new programme would be updated in early 2019 and would be “more structured and effective,” with CCTV infrastructure central.

Back office CCTV upgrades vital to the river cameras have in the meantime continued as a separate project, and are expected to be complete by early 2019, police added.

Earlier this year the City’s health and wellbeing board expressed “disquiet” to the police committee that the cameras project had still not advanced, and was told by police bosses that the technology had changed since the cameras were proposed.

Board chairman Marianne Fredericks repeated leaders’ concerns to members at the 23 November meeting.

“I’m rather dissatisfied with a lack of progress on the cameras for the bridges to aid and help with the prevention of suicide,” she said.

“I’m deeply unhappy that this small project has been bogged down with this large project [which] is going to be a larger and more expensive project.

Councillor Fredericks said it would be “sensible” for them to be installed at the same time as bridges are lit up by artists for the Illuminated River project.

A police spokeswoman said the cameras project was set to be delivered.

“Suicide prevention and the protection of vulnerable people remains a key priority for the City of London Police, along with ensuring we have the most robust and innovative counter terrorism measures,” she said.

“The next steps are to restart the river cameras project within the CCTV and infrastructure strand of Secure City, and review all previous work completed with an ambition of developing the project at pace.”

Police published figures in June showing 33 people had committed suicide in the past two years within the Square Mile, and that hundreds more had made attempts.