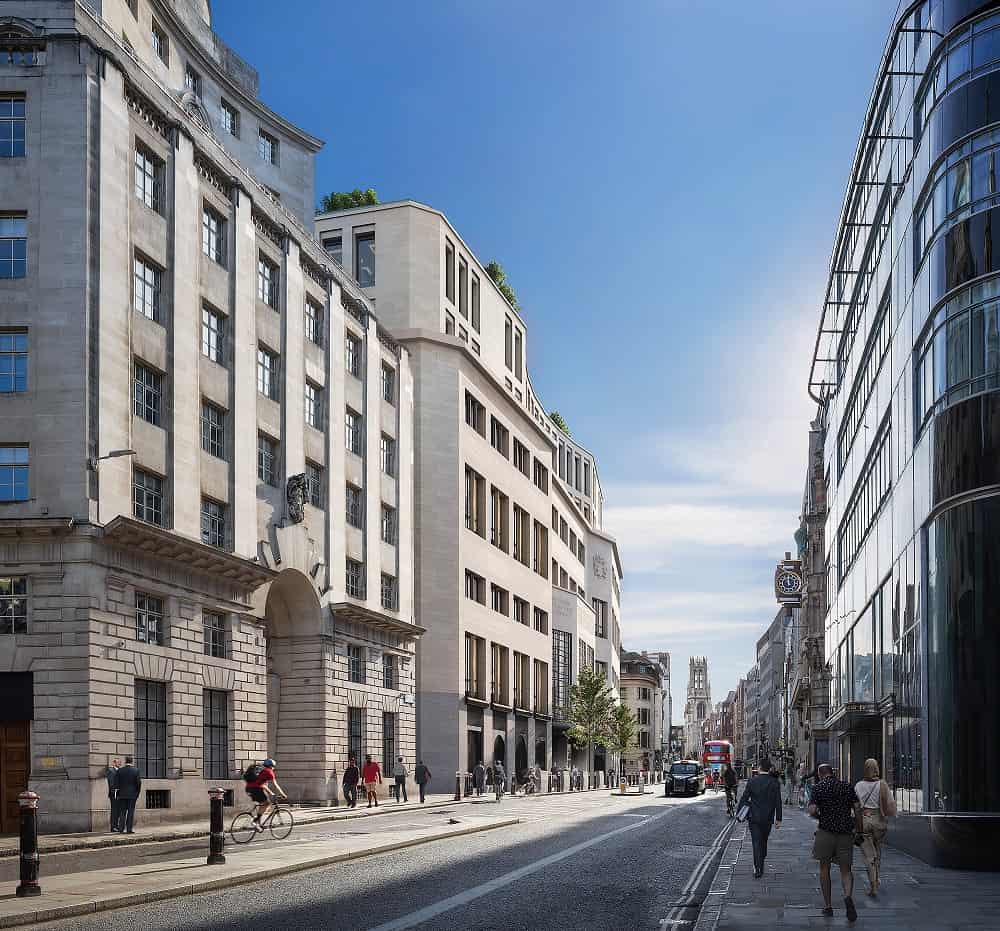 Heritage campaigners have warned that a “landmark” court and police headquarters fronting onto Fleet Street will destroy heritage on the iconic road which was once the centre of journalism in London.

The multi-million pound scheme for a new base for the City of London Police and an eight-storey magistrates, crown and county court, was hailed as a major step which “will enhance city’s reputation” and support 2,500 jobs – 400 new ones. It was approved by the City of London’s planning sub committee.

Its chief planning officer, Gwyn Richards, said the modern buildings would play a key role to “administer justice efficiently and uphold the rule of law”.

However heritage campaigners opposed the Corporation’s scheme which would see the loss of  three large historic buildings fronting onto Fleet Street. They want the secretary of state for planning Robert Jenrick to call the scheme in.

The buildings which will be knocked down include 72-78 Fleet Street, which according to SAVE Britain’s Heritage is known as Chronicle House, an impressive office building designed and built in 1924 for the newspaper trade by Hebert, Ellis & Clarke.

Number one Salisbury Square, is “a fine, five storey early Georgian town house carefully rebuilt in 1962 following war damage that illustrates the type of buildings that once surrounded Salisbury Square in the 18th and 19th centuries”.

The buildings which will be knocked down also include include the Victorian Hack and Hop, on Whitefriars Street.  A new larger pub will be built to replace it.

Henrietta Billings, director of SAVE Britain’s Heritage, says: “Conservation areas like this one are designed to recognise and protect the special character, flair and heritage of our important streets and places.

“Fleet Street is famous for its rich newspaper history, as well as its largely well-preserved streets and alleyways and medieval street pattern. Large scale demolition-creep of this kind is crass and short-sighted in any location – let alone in a so-called conservation area. The whole approach needs a re-think,” she said.

NOW READ: 587 tall buildings ‘in the pipeline’ across the capital

Marcus Binney, executive chairman of SAVE Britain’s Heritage said: “The supposed public benefits claimed for this scheme do not begin to outweigh the massive harm caused by the destruction of a substantial part of the conservation area. Given the opposition, these proposals must be the subject of a public inquiry.”

Historic England, Twentieth Century Society and the Victorian Society were also concerned about the scheme.

English Heritage are concerned about the changes in views of St Bride’s Church, known as the Journalists’ or wedding cake church because of its distinctive spire.

The development is down the road from the Royal Courts of Justice.

The City of London’s chief planning officer Gwyn Richards said: “This is absolutely pivotal scheme in the legal quarter in London.”

“This is a unique proposal for a civic centre in the city.

These include the Royal Courts, Telegraph, Express and Reuters buildings nearby.

The eight-storey court building will tackle cyber and economic crime with separate entrances for jurors and will have a roof top garden.

Mark Stewart from the court service said: “This is a genuinely landmark court building.”

The new police station will also have a garden, designed to bring light into the custody suites below.

James Thomson, who chairs the  City of London Police Authority Board said the new base was essential as “the force today is scattered round the city buildings that they have outgrown”.

The scheme will also move the historic Wakeman’s obelisk to a former Lord Mayor, which has already been moved several times in its history.

Alderman Ian Luder said: “This development is a vital investment for the City and the UK.”

But Councillor Graeme Harrower rejected the suggestion that the courts would help deal with the backlog created by Covid which he said would be “long cleared” by the time it is completed.

He said the scheme would see the demolition of buildings which “make considerable contribution to the city’s heritage” and the “obliteration of the last remnants of the medieval alleyways.”

He saud it would change the face of the 800-year-old Salisbury Square.

“This development should be sited where it should not be necessary to demolish heritage buildings,” he added.

Councillor Sue Pearson who is also an architect said the scheme “shows total disregard for heritage”.

She said the design of the court was “a missed opportunity”.