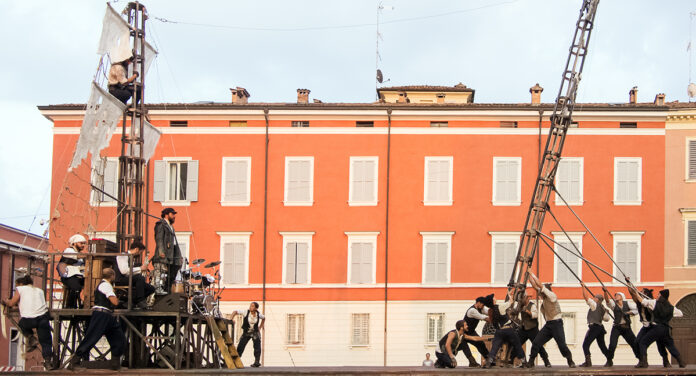 London’s rich history of architectural and engineering firsts will be celebrated in a programme of more than 50 outdoor events this summer.

Inspired by a number of key historical dates, the impressive six-month programme of mostly free-to-attend events – dubbed Fantastic Feats: the building of London – includes a tribute on the 200th anniversary of the birth of Sir Joseph William Bazalgette (1819-91); a the civil engineer responsible for creating London’s sewer system, which was crucial in reducing cholera epidemics in the Capital.

Basically, there are a whole heap of important architectural anniversaries going on this year in the Square Mile. And each is getting its very own special event to celebrate it.

Suitably, an exciting line-up of UK and international artists has been commissioned by the City of London Corporation to present street theatre, dance performances, exhibitions, guided walking tours, and art installations.

On both 20 and 21 July, guests at Guildhall Yard will witness The People’s Tower by French artist Olivier Grossetête.

He’ll invite locals to help him recreate – and eventually destroy – a large building influenced by the architecture of Guildhall, solely by using cardboard boxes and sticky tape.

The construction will stand up to 20metres tall, be made from 1,500 boxes, and weigh more than 1.5tons.

From 18 to 22 June, riders – wearing a VR headset as they swing – will be transported into exhilarating dream experiences, each of them, offering a different sensation of flight.

Volo celebrates 500 years of the creations of da Vinci, and is inspired by his meticulously detailed machines, his studies of flight, and his pioneering work on perspective.

Street performances, featuring aerial, acrobatic and pyrotechnic displays will also pop up all over the Square Mile.

The UK premiere of Thank You for Having Us is the newest work from French street performance group Générik Vapeur and the UK’s only Grand Volant Flying Trapeze circus, Gorilla Circus. It’s one of the most hotly anticipated events of the entire programme, running on 7 September.

The performance is an exploration and statement of humankind’s relationship with the natural world, and will explore topical environmental issues such as the impact of plastic waste through a series of aerial acrobatics and choreographed movements in a travelling procession through the Square Mile.

Audiences will be taken on a nocturnal walk through the eighth continent, a plastic-filled artificial island that has formed in the North Pacific Gyre.

A UK premiere of Herman Melville’s novel Moby Dick will also be brought to Guildhall Yard on 2 August.

Greenwich+Docklands International Festival and Teatro Dei Venti have brought this together, using acrobats, dancers, musicians, engineers, and a technician working together to build a 17-century ship which will transform into a whale.

Working with a number of artists from across the new music scene, there will be site-specific performances, sound installations, and genre-bending DJ sets over three nights in the summer, with each event taking place at a different rooftop location in the City.

They’re showing that the City of London is a place for young and modern people to come together.

For an added bonus, the Corporation has formed a partnership with Pop Screens, an outdoor pop-up cinema, who will present a series of films themed around architecture, invention, and engineering.

Expect to see the likes of Jurassic Park, 500 Days of Summer, Back to the Future, First Man and Wall-E.

Graham Packham, chairman of the City Corporation’s culture, heritage and libraries committee, said: “The key word in this exciting programme is, undoubtedly, ‘fantastic’, chiefly, because of the wide range of events that has been put together to celebrate these technological and engineering firsts.

“From dancers weaving their way through the Square Mile and a ship that turns into a whale to the ever-popular City Beerfest in Guildhall Yard, and the opportunity to view alternative designs for Tower Bridge, there will be so much to enjoy.”

Fantastic Feats: the building of London will run across various sites in the City of London from 31 May until 1 December.