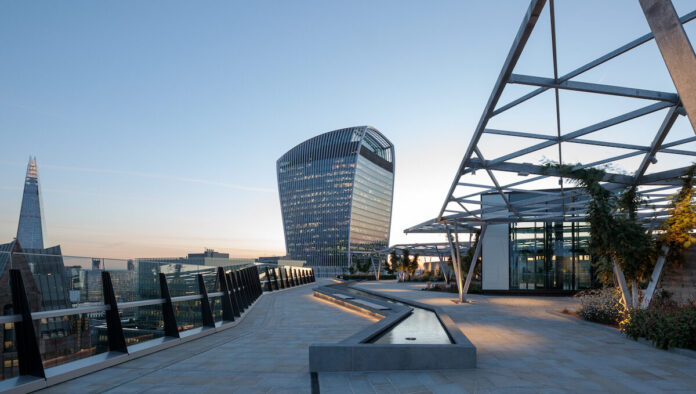 The City of London’s largest rooftop public space – The Garden at 120, located atop the newly opened Fen Court office building at 120 Fenchurch Street – has officially opened to the public.

At 15-storeys up, the viewing platform offers exceptional 360-degree views of the City and greater London, and is free for members of the public to visit, with no booking required.

Fen Court includes retail offering at the lower levels, a 14th-floor restaurant, and dedicated public lifts which lead directly to The Garden at 120, which plays host to pergola planting with fruit trees, Italian wisteria, seating, a water feature and a coffee hut.

The 207-person capacity rooftop garden will be open every Saturday and Sunday between 10am and 5pm (for two six-week trial periods), as the City of London continues to strengthen its offering as a vibrant weekend destination.

Chris Hayward, chairman of the planning and transportation committee at the City Corporation, said: “I am delighted to add to the 60 green roofs in the Square Mile with this venue, which offers a peaceful retreat from busy City streets and views of some of the world’s most recognisable landmarks.

“I especially look forward to the warmer months when the garden will be in full bloom, complementing the success and popularity of the SkyGarden at 20 Fenchurch Street and the roof terrace at One New Change as a weekend destination for Londoners and visitors alike.

“Fen Court is an exemplar of the type of developments that the draft local plan (City Plan 2036) proposes for the future of the City. A free public space, a pedestrian route between Fenchurch Street and Fenchurch Avenue creating more space at ground level, and the garden, goes above and beyond our urban greening proposals.”

The City of London leads the world in the extent of its free public spaces at the top of its skyscrapers. Half of the 14 upcoming tall-building developments due to be completed by 2026 will have free public viewing galleries and terraces in one district.

Including the opening of Fen Court, these are: 22 Bishopsgate, 6-8 Bishopsgate, 1 Leadenhall Street, 100 Leadenhall Street, 2-3 Finsbury Avenue, located north of the eastern cluster, and 1 Undershaft which will also host a Museum of London gallery at the top of the building alongside interactive learning spaces and London’s highest restaurant.

Eric Parry, founder of Eric Parry Architects, who designed The Garden at 120 alongside landscape architects Latz+Partner, said: “Fen Court is a building that represents a sustained dialogue between the planning authority, the client and the architect to create a building that is more than the sum of its architectural parts.

“It is a civic as well as a commercial building and it creates a new convivial horizon within the emerging taller buildings of the Eastern cluster.”

City Plan 2036 development guidance will encourage even more economically inclusive and environmentally-friendly development over the next two decades, with policies requiring all new developments to include a greening element and new walking routes through tall buildings to allow the public to benefit from more navigable and less congested City streets.

The document is open for consultation until 28 February.