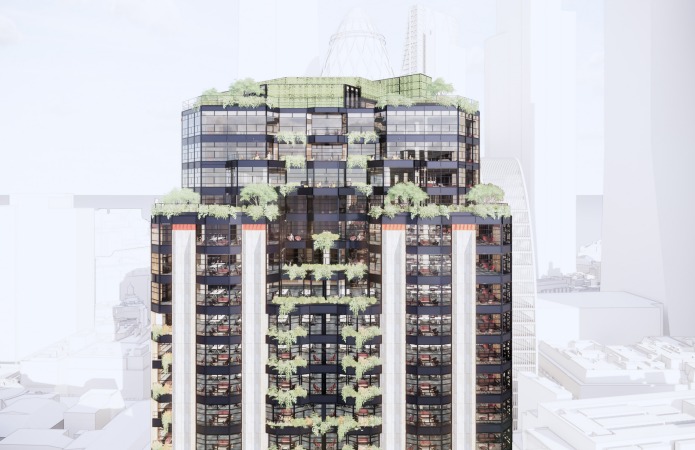 Plans for a huge office block at Cutler Street and Houndsditch will be referred to the full Court of Common Council after backlash from a group of concerned councillors.

Aldgate residents had previously claimed that proposals for a 23-storey tower would damage their mental and physical health by reducing sunlight.

But despite their objections, developer Cutlers Houndsditch Unit Trust was given permission to break ground by the City of London’s Planning and Transportation Committee, voting in favour of the application 11 votes to six.

However, since approval was granted earlier this month, a group of councillors have written to the wider Court, imploring them to lend their support of a referal.

Having reached the 20 signature threshold, the decision will now be on the agenda when the Court of Common Council convenes on December 9.

A statement from the opposing group of councillors said: “The decision by the City’s Planning and Transport Committee on the Houndsditch application on November 16 has struck a discordant note with a number of members of the Court of Common Council.

NOW READ: Aldgate tower block gets approval despite fears sunlight will be blocked from homes

“On Saturday November 20 the councillors for Portsoken, which is the ward in which the development would be located, wrote to around a quarter of the members of the Court asking for their support to refer the application to the full Court for a decision.

“Although 20 members are required to sign a notice of referral, by the following Tuesday more than 25, being most of those asked, had agreed to do so.”

According to the group, “most of the councillors representing the three big estates” (Barbican, Golden Lane and Middlesex Street), back the petition.
They say residents have reached “breaking point” and want permissions to build stripped away.
In response, a City of London Corporation spokesperson said: “As with most local authorities, any report or decision made by a Committee can be referred to the full Court of Common Council under standard procedures.

“As such, the report of the Planning and Transportation Committee regarding the planning application for 115-123 Houndsditch, which was approved by that Committee, will be on the agenda for the Court of Common Council meeting on December 9.”