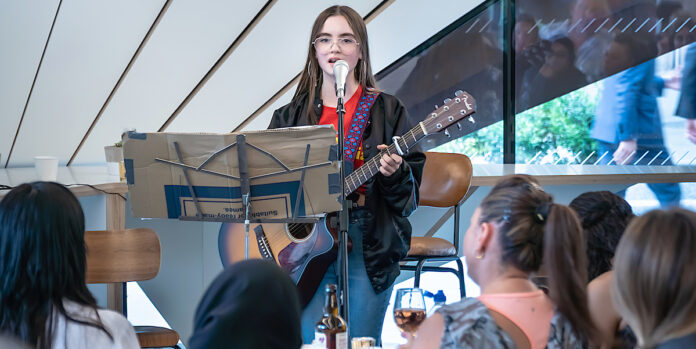 This month I’m making a shout out to music enthusiasts living or working in the City about a great new project that has recently been launched right here in Portsoken.

Visitors to Kahaila café in Aldgate Square may have noticed that the venue is now occasionally staying open later into the evenings to host an event called Open Mic East. If you haven’t been to one before, the basic premise behind an open mic night is that anyone who fancies having a go can just turn up to sing or play music.

This can be a great way for musicians to try out new material and to gain confidence and experience performing in front of a real, live audience.

I went along to the most recent Open Mic East event and found Kahaila busy on a balmy summer evening when the large glass doors had been slid open and tables, chairs and patrons had spilled out from the café on to Aldgate Square.

The venue was seemingly making effective use of its alcohol license to attract local residents and loitering City commuters who had all stopped by to enjoy a summer evening drink and a bit of live music.

The calibre of the acts was impressive, sometimes remarkably so. While one adult took to the stage, the most notable thing was just how incredibly young and fresh-faced all the other performers were. In fact, virtually everyone participating was between the ages of 13 and 16. And they were fantastic.  Some played covers and some played their own material, and there was also a great bit of self-composed poetry thrown in by one young woman.

Fans of popular TV show The Voice Kids will be aware of the incredibly talented 13 year-old Sam Wilkinson. Sam popped in to Kahaila to play us all a few tunes. 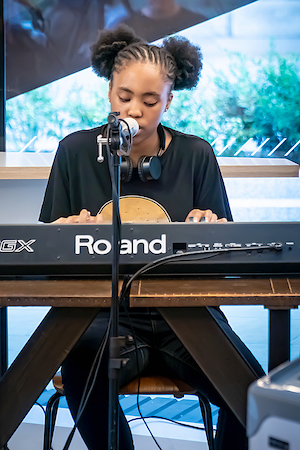 Neither Sam nor his audience could have known it then, but just two weeks after his appearance at Open Mic East he was to make it all the way to the live, televised final of The Voice Kids, where he went on to win the competition in front of millions of viewers watching on ITV1.

The City of London can often seem like a very small place, and yet I was still surprised to learn that Open Mic East is actually the brainchild of two of my neighbours, Anne Kilroy and Rob Valenta.

Curious to know more, I caught up with them both. Anne explained to me how she and Rob became inspired to start encouraging young Londoners to showcase their musical talent after Rob made an impulsive and impromptu decision to enrol their teenage daughter, Riley, in last year’s Aldgate Square Festival.

Anne recounted how Riley was understandably a little nervous about the prospect at first, but her parents encouraged her and were delighted to see how she rose to the challenge and aced her first public performance singing and playing in front of an audience.

Furthermore, they noticed the substantial positive impact that this had on their Riley’s confidence. Reckoning that there must surely also be loads of other youngsters out there keen to show off their musical talent but who lacked the opportunity to do so, Anne and Rob came up with the idea of putting on a regular Open Mic event here in Aldgate. And so Open Mic East was born.

While the organisers heartily encourage performers of all ages to come along and participate in Open Night East, they stress that younger performers are especially welcome.

Rob points out that kids who are really into football will practice daily and then get the opportunity to play matches in local leagues so that they can get their talent noticed.

“But what about kids who are passionate about playing music? Most spend a lot of time practising alone in their bedrooms but they don’t actually get much opportunity to perform regularly in front of other people. That’s an issue we want to address,” says Rob.

They say that if you build it, they will come, and this appears to have been exactly what is happening with Open Mic East.

The event that I went along to was the third to be held at Kahaila and was well attended, both in terms of performers and people who had come along to watch.

“It’s been brilliant,” enthuses Anne, who was the compère at the last event. As a grassroots, community-based idea, Anne stresses that she and Rob are extremely grateful both to Kahaila’s manager, Joy DaCosta, and to Laura Ratling, the City of London’s events and engagement officer for their assistance in helping make Open Mic East a reality. She also extends her gratitude to friends who have volunteered their time to help with things like sound and videography.

Open Mic East is a project that I’m really keen to endorse. What’s not to like about
two local people coming up with a great idea that puts Aldgate on the musical map and helps showcase the fact that we live in an area that is absolutely brimming with creativity and talent?

It’s also really positive to see that, by running events like this, Kahaila is continuing to establish itself as much more than just another run-of-the-mill coffee shop, but rather as a proper community hub that is keen to innovate and is receptive to trying out new ideas suggested to them.

Anne and Rob’s intention is for their Open Mic East event to continue as a regular fixture on the local music scene, with the plan currently being to put on events every other month.

No date has yet been set for the next one but you can find out more on Instagram @OpenMicEast. Future gigs will also be advertised on the Middlesex Street Estate’s residents’ notice boards and on the Neighbourhood Watch WhatsApp group.