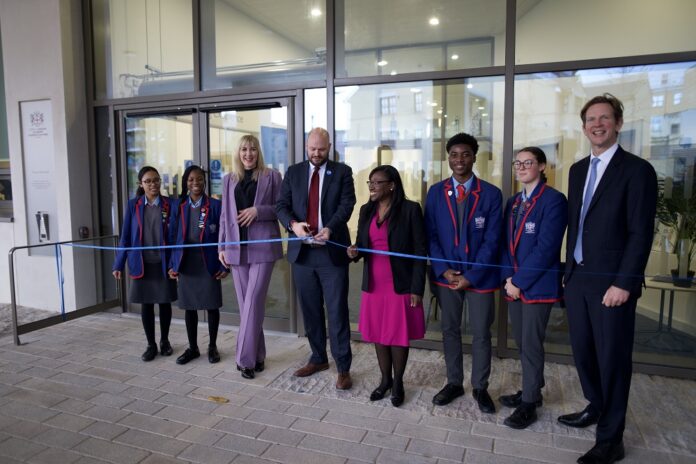 Students of the City of London Academy Shoreditch Park were among the guests at the official opening of its new permanent school building on Friday.

The new site on Hyde Road features a dedicated sixth form centre, state-of-the-art science laboratories, music and theatre facilities, and a sports pitch on its roof.

City of London Academy Shoreditch Park opened in temporary teaching space in September 2017 with one year group, and has added a new Year 7 every year since, with the oldest students now being in their GCSE year.

The school aims to prepare its most gifted students to be accepted into the top universities in the UK or internationally, and to compete with those from independent schools in their chosen career sectors.

The school’s leadership will also prioritise supporting students with their mental health – in particular, those who have been affected by the COVID pandemic – and aims to open a new, highly academic sixth form on site in September 2022.

Principal of the City of London Academy Shoreditch Park, Holly Arles, said: “Our official opening event marks the end of a four-year journey that required an unwavering insistence on high quality work and conduct, as well as plenty of resilience.

“While classes were being taught in temporary accommodation, we drove standards up, year on year, to the point where we are now recognised as a centre of excellence for behaviour, both, within the City of London Academies Trust and beyond.

“My colleagues and I are delighted that we are where we are, not just geographically, but also strategically, in terms of how we have set out our vision and goals for students and staff in this impressive building.”

Chair of the City of London Academies Trust Board, Tijs Broeke, said: “There will be much for students to enjoy, and to be engaged with, in the Academy’s new building and I am very pleased that it can now officially open.

“Promoting the need for, and value of, a good education has always been close to my heart, and I look forward to hearing how the students continue to develop and flourish over the coming years.

“I want to thank Hackney Council, our sponsor the City Corporation, and the local community, for their support – together we made this new school building a reality.”

Philip Glanville, Mayor of Hackney, said: “The new Shoreditch Park Academy represents our continuing ambition for education in Hackney, seeing over £40m of investment not just into one of the finest school buildings in the country, but even more importantly the future of our young people. Together as part of the wider Britannia project we are delivering the biggest investment in Shoreditch for a generation, which has already provided a state-of-the-art new leisure centre and will include genuinely affordable homes for local people.

“The opening is also a landmark moment in our commitment to overcoming funding challenges to provide the high-quality facilities and infrastructure that Hackney residents deserve, directly delivered by the Council and serving some of the most challenged parts of our borough.”

The City Corporation has been named twice by social mobility charity, Sutton Trust, as the UK’s best academy sponsor for empowering pupils from disadvantaged backgrounds to perform above the national average, and the leading academy sponsor for Progress 8 and Attainment 8, which track pupil progress and achievement.

The new City of London Academy Shoreditch Park is part of Hackney Council’s Britannia project which is also delivering a state-of-the art new leisure centre and hundreds of new homes, including homes for social rent and shared ownership.