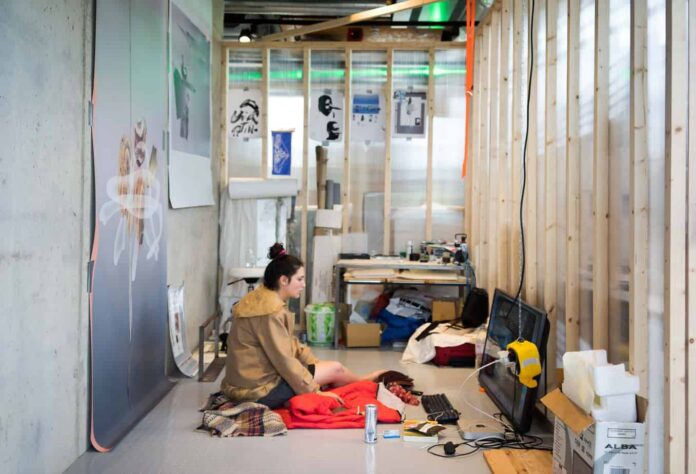 At what point does a new residential development shed its ghost town sheen and start feeling like part of the landscape?

Is it when the young trees in the plaza can stand up unassisted or when the trendy pizza joint on-site starts turning a profit? Five years? A decade? Never?

Developers are doing all they can to knit these new builds into the fabric of an area through ‘placemaking’ – curating a retail, dining and cultural offering designed to transform urban deserts into “It” destinations.

And one arts charity believes it has a way to speed up the placemaking process while tackling the chronic shortage of affordable creative studio space that is pushing artists out of the Capital.

Studiomakers is an initiative from the Outset Contemporary Art Fund aimed at working with property developers and local councils across London to find ways of integrating affordable creative workshops into new and existing mixed-use spaces.

It was launched in response to a 2014 report from the Mayor’s office that predicted a third of London’s creative workspaces would be eradicated by high rents over the next five years; a total loss of 3,500 by 2019. Arts and culture contribute about £11.8billion to the UK economy, according to the Arts Council, but the majority of artists earn less than £10,000 a year. Many are opting to move out of the Capital or abroad to cities like Brussels, Berlin and Lisbon where space is more affordable.

For many in the arts, including Outset, which has raised millions of pounds through private patrons to help museums and galleries acquire new work, the loss of this studio space would place London’s status as a world-class city for culture in serious jeopardy.

“The R&D of the creative sector – these artists and innovators – we’re basically offshoring them,” explains Studiomakers project director Yves Blais.

“We realised that the studio as a laboratory, as a space of innovation, needed to be safeguarded and the way to do that is to get the private sector involved in creating that long-term solution.”

One part of the plan to preserve studio space is through the Creative Land Trust; a £30million fund established to purchase land designated for use by artists and makers, which is launching officially this autumn.

The other phase is facilitated through private developers, many of which could be held  at least partially responsible for pricing artists out of central London in the first place.

Since 2016, Outset has been attempting to broker relationships with developers, local authorities and landowners across London to identify new spaces that studio operators can run as affordable creative workspaces.

“We’re looking to start conversations with developers before they even start putting pen to paper,” Yves says.

“How we create affordable workspace is by building it in at pre-planning stage, not by shoe-horning it in at the end.”

So what’s in it for the property sector? Why should developers forego a luxury flat or prime office space to house a sculptor who is paying rent of around £14 per square foot per year; the maximum amount considered ‘affordable’ by the Greater London Authority? Well, one thing artists are particularly good at is injecting some personality into a sterile space.

According to the Mayor’s 2014 report, artists can add significant market value to a development, foster a sense of community on hard-to-let sites and generate brand value and a point of difference for developers.

Outset co-founder Candida Gertler says creative communities have a huge role to play in building a sense of character for an area, particularly on former industrial sites that don’t have a strong history to draw from. Equally, attempting to fill spaces with a hodgepodge arts and cultural programme without a strategic direction can also leave a development feeling cold.

“You can’t just build on these brownfield sites and expect to all of a sudden have this liveable community,” she says.

“Developers have this idea of ‘Oh, wouldn’t it be nice to have artists here’, but it has to be a curatorially-led concept that is specifically designed to build a history and engage the thousands of people that will be living there.”

All new developments are subject to Section 106 of the 1990 Town and Country Planning Act, which requires a contribution to infrastructure that benefits the area in the form of affordable housing, roads, public space and the arts.

In the case of the latter, these requirements have traditionally been met with bold, brash public art works in windswept forecourts, but Candida and Yves are hoping they can convince developers to think beyond the “big bronze horses”.

“There are examples of successful public sculptures, but very often Section 106 is misused, which is something we’re trying to change,” Candida says.

“We don’t want to be exchanging affordable housing for affordable workspaces because then you’re not achieving anything, but what we are suggesting is replace the big bronze sculpture with studio spaces for a sculpture artist that will really engage with the community.”

“Really what we want to try and impress upon the property sector is how these artists can help them in their work to create the type of workspace and livespace that is set for the 21st century.”

Studiomakers already has one success story in London City Island in Canning Town, where developers EcoWorld Ballymore have dedicated 16,000sq ft of space to creative studios and project space. Studio operators Arebyte have relocated their headquarters from Hackney Wick, and will be joined by the English National Ballet and London Film School in 2019.

Other arts organisations are also making strides in the field, including Create London’s affordable housing project in Barking town centre, which combines a new community arts centre with studio work spaces and 12 affordable apartments for artists.

And the Studiomakers concept is not limited to new builds. At Outset’s own headquarters in Somerset House, they rub shoulders with more than 100 artists and makers housed in the Grade I-listed Admiralty Building, which was converted into affordable creative workspaces in 2016.

Somerset House Studios is made up of workshops and exhibition rooms for artists to lease desks and workspace at heavily subsidised rents. Most share their studio with one or two other makers and take part in a social programme designed to foster co-working and collaboration alongside arts start-up incubator Makerversity. They started with an initial intake of 65, and have doubled it in less than two years, with waiting lists for artists looking to move in.

Yves sees no reason why one of the City’s new developments, or even perhaps an old landmark, could not flourish with the same treatment.

“The new Bloomberg building has just opened up their art space so there’s some momentum and if we could build on that it would be amazing,” he says.

“Bringing this concept to the City would be saying ‘this is serious now’, you’ve got the financial sector and the creative sector side-by-side, and look how well it works.”