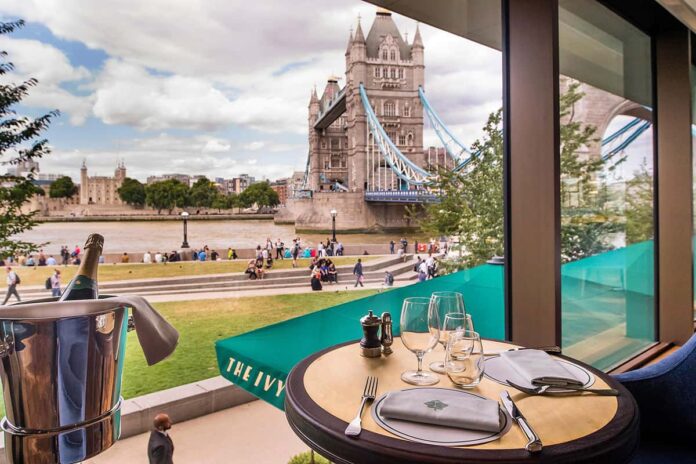 When the new residents of riverside development One Tower Bridge picked up the keys for their luxury pads at the start of the year, they didn’t have to travel far for a glass of fizz to celebrate the move.

Prosecco House opened on the ground floor in February to a great deal of fanfare as London’s first ever bar dedicated to Italy’s sparkling stuff, with around 20 premium varieties poured in plush surroundings.

The launch popped the bottle on a number of high-profile dining and lifestyle openings at the foot of Berkeley Homes’ 376-apartment development where penthouses are rumoured to have reached £15million.

By CHLOE, the US vegan chain that painted Covent Garden green earlier this year with plant-based fast food favourites like the guac burger and quinoa taco salad, opened its highly-anticipated second UK store at the foot of the development last week.

And Harneet and Devina Baweja, the husband-and-wife team behind Spitalfields’ Indian favourite Gunpowder, are venturing beyond E1 (they also own Madame D’s and Gul & Sepoy on Commercial Street) to open a second Gunpowder and Kolkata-inspired bakery Custard this summer.

Add to that the already established flagship restaurant for brasserie The Ivy and London debuts for former Masterchef star Tom Simmons and acclaimed Brighton-based restaurant The Coal Shed, and residents have a veritable smorgasbord of options for a Saturday night in.

For Berkeley Homes, this evolution of a dining destination on the doorstep of its latest development was no coincidence. Instead, managing director Harry Lewis says the tenants have been carefully selected to create a distinct identity for the area.

“Every restaurant has been hand-picked to ensure a mix of international cuisines, with a focus on new and up-and-coming restaurants as well as established favourites,” he says. “We wanted One Tower Bridge to be a seven-day-a-week community; somewhere that residents, local workers and visitors would enjoy and want to spend time in.”

We all know what a hipster cafe and an organic wine bar can do to property prices in an up-and-coming part of town, but the pulling power of big name chefs and restaurants can have an impact on areas that are already well-served in the lifestyle arena.

A prime example is celebrity hangout Chiltern Firehouse, which is still making its presence felt on Marylebone’s property market more than four years after its launch.

Paul Sulkin, sales director at local estate agent Kay & Co, estimates prices in this prestigious pocket have risen by 42% since the exclusive restaurant and hotel opened in 2013, with the stream of beautiful patrons featured in the society pages each week stoking demand for homes in the surrounding streets.

But Berkeley isn’t the only developer throwing its doors open to big players on the restaurant scene. Across the river at Ten Trinity Square, Reignwood Group has revamped the Grade II-listed former Port of London Authority building to house 10 luxury residences, the new Four Seasons hotel, and a trio of high-end dining options including the Michelin-starred La Dame de Pic from acclaimed French chef Anne Sophie Pic.

Jones & Co sales manager Duncan Peacock, who has listings in both Principal Place and Battersea Power Station, says that buyers in this market are looking for “lifestyle they can live on their doorstep”.

“In the case of Battersea, they’ve had a lot of success with independents, which has knock-on effect for the whole Nine Elms area,” he says.

“None of these big names like to be the first to sign on, but when you’ve got the largest Waitrose in London next door in Embassy Gardens as an anchor, others see the potential very quickly.”

For Gunpowder’s Harneet Baweja, One Tower Bridge was the perfect site for his new concept; a bakery inspired by his childhood memories of the old coffee houses of Kolkata.

“People from different backgrounds and religions would come together for their morning and afternoon coffees and pastries,” he says.

“They’d sit on big communal tables and discuss everything from local and world issues to families and business.

“Tower Bridge seemed the right fit with its mix of people around there – everyone from tourists, office workers, residents, destination diners. I wanted somewhere that would bring all of these people together.” And the life-styling doesn’t end with restaurants; Hackney-based boutique fitness studio BLOK set up its Shoreditch outfit on the ground floor of Principal Place last year, while neighbouring development The Stage is set to house high-end American fitness club Equinox, complete with a three-year complimentary membership for residents of the £750m scheme from 2019.

Culture vultures at One Tower Bridge can also  enjoy a show with their dinner at the 900-seat Bridge Theatre, where actor Laura Linney is currently treading the boards as the lead role in My Name is Lucy Barton, an adaptation of Elizabeth Strout’s best-selling short novel.

The Bridge is London’s largest new commercial theatre in more than four decades and the homebase for National Theatre-alumnae Nicholas Hytner and Nick Starr’s London Theatre Company, but also key to drawing visitors east along the south bank, according to Harry Lewis.

“Creating this new destination was also particularly important given the opening of the newly-redeveloped London Bridge Station, as visitor numbers are expected to increase by as much as  eight million this year,” he says.

“Ensuring the right mix of residential, fine dining, cultural offerings and public spaces played a vital role in this – One Tower Bridge has now fully come to life as a new hub on the south bank, over 10 years since the vision was first conceived.”