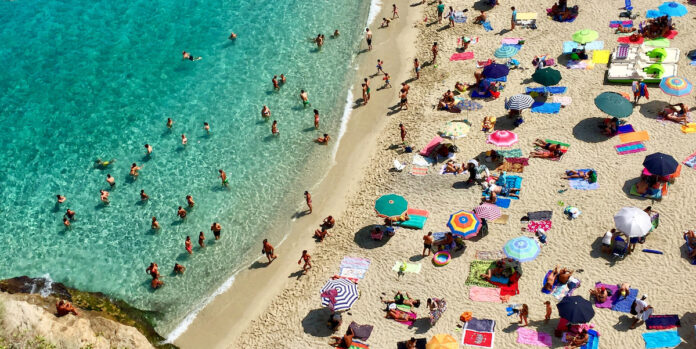 Calabria – the toe of the boot that is Italy.

This is one of the country’s most underrated regions due to its fairly tumultuous history. It was very poor for a very long time and the mafia ran the joint, too. They still kind of do but tourists need not worry!

This means that the villages and cities aren’t going to look like the clean and colourful ones you find further north – instead what you get is grittier and a more honest Italy.

Alongside these less homogeneous and globalised cities, you’ll come across some of the country’s finest coastlines on both the Ionian and Tyrrhenian Seas.

And you won’t have to journey far before reaching the mountainous interior full of old monasteries and large nature reserves. Hire a car (or Vespa) and get exploring.

This is the most popular tourist destination in all of Calabria.

It represents all the best bits of the area’s coast – long sandy beaches backed by tall rocky cliffs which curve around the old village. Fortunately, most who visit are either Italians or distant relatives from American and Australia who emigrated from Calabria after the Second World War. This makes it so refreshing. The rest of Italy is swarmed by international travellers throughout the year.

It does mean English speakers will struggle a little more than elsewhere, but it’s worth doing a few days on Duo Lingo to really immerse in some proper Southern Italian culture.

But be sure to get off the pristine beaches (like our favourite Capo Vaticano) at some point, to explore the town itself, which is said to have been founded by Hercules himself. Whether that’s true or not doesn’t matter though.

It is full of a rich and diverse culture due to it being invaded by Arabs, Normans, Swabians, Anjous, Aragonese, and even Turkish pirates. This cultural mish mash is reflected in the food, people, local dialect and architecture. Take your time soaking it up.

Located right at the tip of the toe of Italy, this city is popular with travellers crossing from the mainland to Sicily for more exploring. Messina is across the bridge, but before you venture further south, be sure to spend some time here too.

From many vantage points it’s just your usual port town, but the national museum’s rare artefacts of Magna Graecia are reason enough to stay. You could spend all day walking around this museum, taking in all the history and ancient culture.

Most people then make their way to the national park for coastal hiking, working up an appetite for the city’s famous cuisine. Be sure to get around the spicy sausages, roasted aubergines and salted fish.

The city, located down by the coast, is perfectly rough around the edges. It can be a bit chaotic. Don’t get too taken aback by the noise and lack of order. Embrace it.

Head into the old town, up on the steep hill, to see why locals love this place so much. It has its own kind of dishevelled charm and feels as if it has stubbornly refused to modernise like much of the larger Italian towns you’d be used to. Tourists are a rarity – making for uninterrupted access to good old fashioned people watching in bars, restaurants and on the streets.

Cosenza is also a gateway to the nearby mountains of Sila National Park and the perfect stopping off point before driving up into the Italian wilderness.

Soverato is the richest town in Calabria – making it more suitable for the traditional traveller. It is also super small, making it all too easy to get around. Spend the day relaxing on some sun lounges on the beach before heading into town (across the road) for drinking, eating and dancing.

It has a lively nightlife in summer but it’s far from being trashy. It’s no backpacker town. Many bars are open late, with live music flowing through the winding streets, while you can also find a few quiet drinking dens for meeting locals. It may be a small town, but it certainly isn’t sleepy.