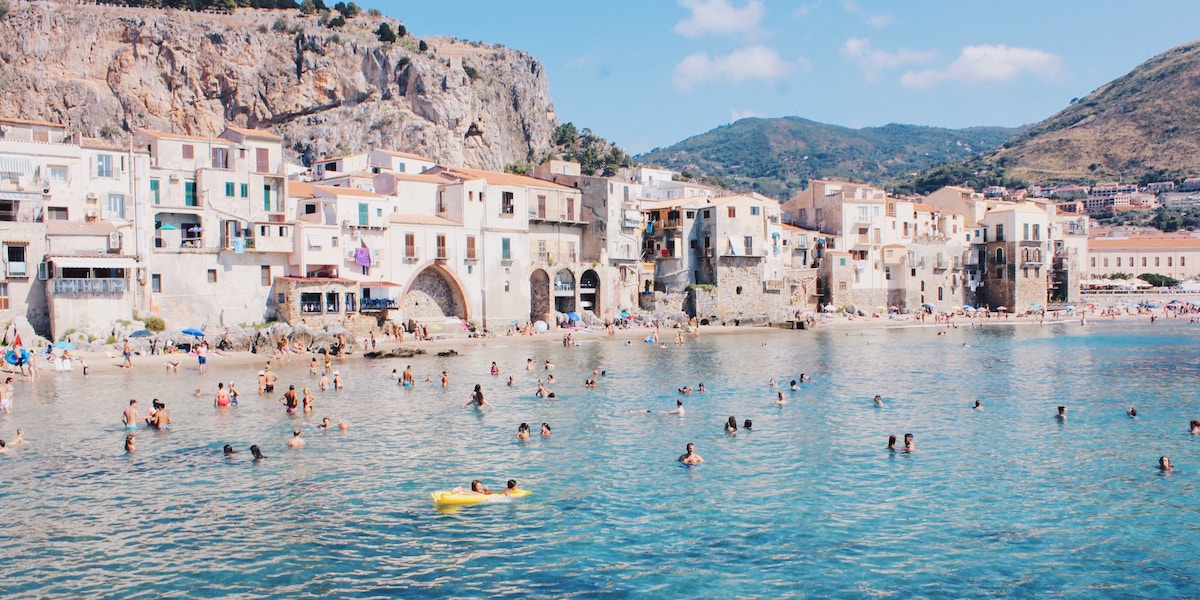 We all love travelling to Italy, but its popularity can be a huge pain. Tourists take over the main cities throughout summer with their huge cameras, booming voices, and the dreadful socks and sandals combination which has somehow survived through its peak in the ’90s.

Thankfully, the little old island of Sicily continues to stay off the radar of most travellers.

It was once a huge agricultural hub of the Mediterranean and a much sought after territory for invaders and immigrants alike.

This has left this part of the country with rich and diverse culinary offerings as well as countless ruins from Romans, Ancient Greeks, Moors, and Vikings.

You’ve also got some stunning untouched beaches, long winding roads through the mountains, and a smattering of small countryside towns.

But before you start exploring the small Sicilian villages, you’ve got to dive right into the mayhem of Palermo.

This coastal city is where all the fun stuff happens. Markets are sprawled throughout the streets with the most notable including Capo, Vucciria and Ballarò. They’re reminiscent of Arab souks where you can find all kinds of amazing street food and local wares.

Grab an arancini ball on the go and get around some pane panelle and crocche, which is nothing more than chickpea fritters in a bun. They’re a deep-fried carb overload. You’re welcome.

Architecture here is also unlike anything else you’ll come across. It is just so varied and unique. Much of this is thanks to all the different countries who once ruled Sicily. You can see the remnant of each conqueror on every corner.

Explore the 12th-century Palermo Cathedral, the huge neoclassical Teatro Massimo, the ninth-century Palazzo dei Normanni, the Cappella Palatina with its Byzantine mosaics, and the Monreale Cathedral, which is inspired by Norman churches, Middle Eastern mosques, and even Viking ships – that’s all in one building.

This was once the centre of the Ancient Greek Empire, and you can find relics of this history all over the town (the main part being Ortygia), including the Temple of Apollo which is surrounded by a daily market and plenty of high street stores.

But, while you’re here seeing all the sites, give one of their little makeshift ‘beaches’ a go too. Locals have set up wooden scaffolding in the sea, so you don’t have to drive far away to swim.

Up in the mountains, not far from Siracusa, you’ll also find the towns of Modica, Ragusa and Caltagirone. They are small but vibrant centres where visitors can find some of the best churches, chocolate, pasta and ceramics. Too many people skip over these towns as they seek out popular coastal areas instead – don’t be one of them.

This port city isn’t known for being the most beautiful place in Sicily but, as it’s a hub for planes and buses, you’ll likely pass through it.

Walk around the famous fish market to get a taste of Sicilian culture. It’s a big messy market with enormous swordfish heads laid out under umbrellas and all other kinds of food spattered about the surrounding streets.

And, if you have the time, get yourself up to Mount Etna, the island’s very own active volcano. When you reach the summit, you can see steam rising from the crater while gaining spectacular panoramic views over the entire island on a clear day.

We’ve gone on and on about ancient ruins in Sicily already, but we can’t create a guide to this part of Italy without mentioning the infamous Agrigento.

Here, you’ll find the ruins of the ancient city of Akragas in the Valley of the Temples. It’s a vast archaeological site with some of the world’s best-preserved Greek temples. Take some time to walk around the ruins, soaking up all the coastal views as you go along.

And just down the road from here, you’ll find one of our very favourite beaches known as ‘The Turkish Steps’. The area is made up of limestone which has been carved out by the waves, making formations which resemble steps. It makes for the perfect spot to take a dip after seeing some of the sites.

You’ll then find countless other pristine beaches scattered about the entire island. Simply find a town that looks appealing to you and ask the locals for the best spot nearby. Nothing here will disappoint.