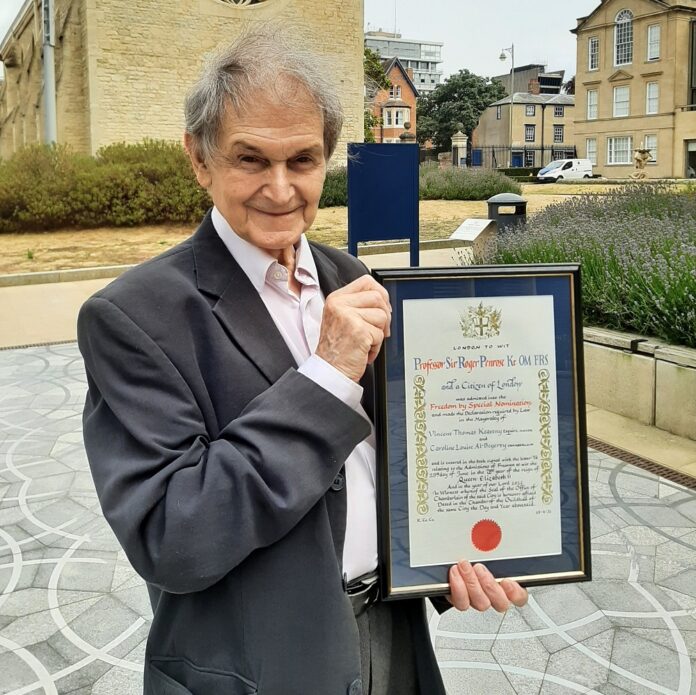 Scientist and black holes pioneer, Sir Roger Penrose, has been awarded Freedom of the City of London.

The professor was awarded the Nobel Prize in Physics two years ago for his pioneering studies in the 1960s.

He was the first to prove mathematically that black holes, whose existence was predicted by Albert Einstein, exist and are a natural consequence of relativity theory.

The 90-year-old also worked closely with the late Stephen Hawking, with the pair winning the 1988 Wolf Prize in Physics for their work on gravitational singularity theorems.

The Lord Mayor said: “We are delighted to award the Freedom to Sir Roger, who has inspired generations of mathematical physicists around the world. His ground-breaking work, old and new, remains hugely influential and he has changed the way we think about our universe.”

Hayward added: “As the UK looks to carve out a new niche for itself post-Brexit, it’s vital that we remain a world leader in science and research. As a nation, we should be proud to have produced globally-renowned scientists of the calibre of Sir Roger, who continues to be a towering figure in his field.”

Aside from his work on black holes, he is also known for discovering Penrose tiling, in which a pair of rhombus-shaped tiles can be used to tile a flat service without the pattern ever repeating itself.

Sir Roger is currently Emeritus Rouse Ball Professor of Mathematics at the University of Oxford, and emeritus fellow of Wadham College in Oxford. He was knighted in 1994 for services to science.

Sir Roger said: “London is a magnificent city in which I have spent many happy and productive years since my school and undergraduate days, and then with four separate academic appointments. I am hugely honoured to be given the Freedom of this wonderfully diverse and spectacular city.”

One of the City of London’s ancient traditions, the Freedom is believed to have begun in 1237 and enabled recipients, who were also required to join a Livery Company, to carry out their trade.