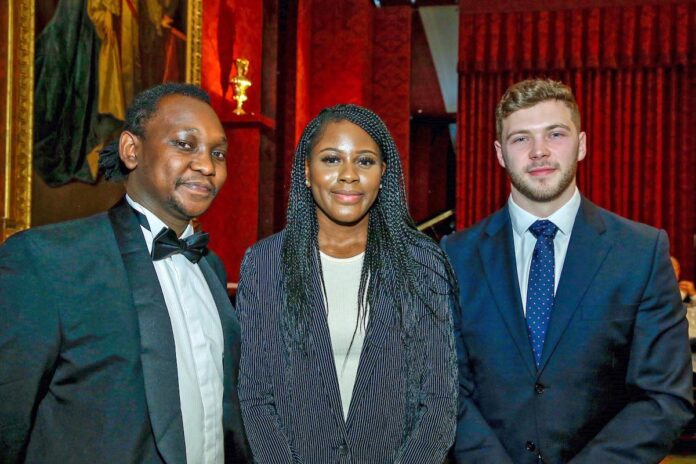 A student nurse who joined the Combined Cadet Force, an award winning young cello soloist, and an England-U20 rugby star have told a City audience that schools should take pupils beyond their desks to learn vital career skills.

The inspirational young people spoke at a City of London Corporation education event last night, telling Square Mile leaders how self-discipline, creativity and leadership are among the skills needed for the modern workplace.

Sarah Adegboyega, 19, attended the City of London Academy Islington. She joined the Combined Cadet Force and became Head Girl before studying as a student nurse at the University of Surrey.

Abel Selaocoe, 26, who is now regarded as one of the world’s foremost young cello players, was born in the South African township of Sebokeng and came to the UK to study music. A winner of both the Royal Overseas Arts and Karl Jenkins awards, he has played as a soloist with BBC Philharmonic Orchestra and appeared on BBC Proms.

Theo Brophy Clews, 21, who studies at Oxford University and captained the England U18 rugby team, is a member of the England U20 squad and a regular for London Irish.

Addressing the City audience, Sarah Adegboyega said: “These experiences have changed my thought processes when I’m faced with adversity.

“The skills that I have learnt in the Combined Cadet Force, including different ways of caring for those around me, I now use as a student nurse.

“I look back on these experiences which now help me in study, as a new cadet instructor and a young black woman.

“I have learned to be caring, resilient and self-disciplined, qualities which will stay with me for life.

“I am grateful that my time in the Combined Cadet Force has taught me these skills.”

England rugby player Theo Brophy added: “Being a professional sportsman has helped me improve my focus and taught me how to accept responsibility for my actions. It has been a huge influence on my personal development.

“On the pitch I have to be completely immersed in the moment in order to perform my best.

“I have become resilient to setbacks, understood the importance of remaining calm and learned to perform under pressure.

“These are skills which and will stay with me into my future career.”

Musician Abel Selaocoe said: “When you learn, you not only take in information, but you must endeavour to become your own teacher in the future. Learning of self-discipline is one of the great perks of learning music.

“In order to be successful at teaching yourself you have to be dedicated to practice, experimenting and being curious about your art or work.”

Henry Colthurst, Chairman of the City of London Corporation’s Education Board, said:

“Education has the power to transform every young person, but we believe academic excellence is not the only measure of success.

“We want to make sure that each and every one of our pupils has access to the skills they need to succeed in a changing – and challenging – modern work evironment.

“Hearing these stories has cemented my belief that young people need support out of the classroom to take in new, real-life experiences to prepare them for the ever-changing world.”

Through its Education and Skills strategies, the City Corporation is placing an increasing prominence on developing pupils’ “fusion skills” through creative and physical subjects such as music, art and sport, to help pupils achieve their career goals.

For example the City Corporation has awarded funding for girls at its sponsored academies to participate in a project run by the London Irish Foundation which uses rugby as a vehicle for developing skills in leadership, collaboration and resilience.

And through Culture Mile Learning, the City Corporation is funding projects improving young Londoners’ access to culture in the Square Mile. The schemes support young people to take part in music, drama, arts and digitally immersive experiences in cultural settings and develop their fusion skills in the process.

In 2017 and 2018, Sutton Trust named the City Corporation as the UK’s best academy sponsor for empowering pupils from disadvantaged backgrounds to perform above the national average, and the leading academy sponsor for Progress 8 and Attainment 8, which track pupil progress and achievement.