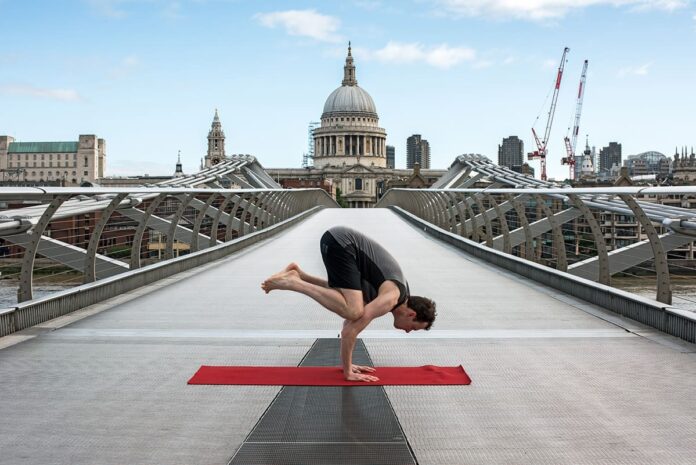 Yogi and banker. A decade ago, these two labels would have been considered mutually exclusive. Joined together, they seemed almost oxymoronic. A homespun caricature of a Buddhist monk in wool pinstripe.

But it was around this time that investment banker Scott Robinson began searching for a mechanism to help him through a tough period and found it in Reiki, the Japanese alternative therapy based on energy transfer from the hands to promote physical and emotional healing.

“The first time I tried it, I felt like I was floating in mid-air – I didn’t know what was going on but I knew I wanted to find out more about it,” he says.

Fast forward just over 10 years and Scott’s fascination with the wellbeing sector has taken him from Reiki practitioner and reformer Pilates devotee right through to holistic health advocate and, most recently, certified yoga teacher following a month-long intensive training course in Bali in 2017.

All this while maintaining a high-flying career in the financial services industry, currently as a director at a major international investment bank. Scott credits much of his success in the latter with his discovery of the former, and insists others in the industry would too, if they knew where to look for it.

“‘Yogi’ stands for anybody that works in wellness, ‘banker’ represents anybody working in the corporate world,” Scott says.

“The whole concept is that if you want to perform at a high level professionally, really thrive, you have to think about the ways in which you can improve your day-to-day life.”

To this end, Yogibanker features a comprehensive glossary of wellbeing practices and therapies, ranging from acupuncture to sleep healing, and a directory for recommended experts in each field as well as their events and workshops.

Scott says he started blogging under the alias as a way to document his experiences, and discovered an underrepresented market in all the other ‘yogi bankers’ and ‘Reiki lawyers’ and ‘meditating marketing executives’, he met along the way.

“I was coming across more and more people working in financial services or big corporate roles that are actively involved in the wellness space in one way or another but wanted more – it’s addictive,” he says.

“Equally, meditation is going mainstream and I think a lot more people are more open to things like yoga as a genuine means of resolving issues like stress and anxiety and improving professional performance, but they don’t know where to start.”

But there remains some persistent misconceptions about the industry, which Scott, who runs his own yoga classes for colleagues, has encountered first hand.

“Men in particular have this idea that they could never practice yoga because they aren’t flexible enough, but that’s like saying ‘I’m too dirty to take a shower’ – your flexibility is that starting point and you work from there.”

Yogibanker has been designed as that starting point, with blog posts outlining the dangers of smartphone addiction, how to meditate on your morning commute, and why you should practice e-mindfulness with your inbox. He has plans to further develop the site to include a forum of advice from Yogibanker’s ‘tribe’ of expert practitioners and member questions and feedback.

“It’s really about breaking down these misnomers and changing the mindset – rather than ‘the doctor says I need to take this medication’ or ‘I’m just going to run on the treadmill for an hour and hopefully I’ll get fit’, which are such 20th-century approaches and they aren’t sustainable.

“If you really want to thrive, go check out a yoga class, see a nutritionist, try Reiki, open your eyes, and be more conscious and aware of the resources around you.”

Whilst the average ratio of males to females in a typical yoga class is 5:1, the origins of yoga in India were that it used to be exclusively for men! Times have changed since then, however many of the top teachers in the world are men, and men can enjoy all the benefits of yoga, just like women.

If there’s one thing I hear in the office, it’s the one about ‘not being flexible enough’ to do yoga. A relative position of inflexibility is the perfect place to start in yoga since the likelihood of injuring yourself is much lower. It gives a firm foundation and position to start from. As time progresses, your flexibility can only improve, and if anything, it’s being ‘mobile’ that really counts at the end of the day.

Wrong! There’s no right time to start practicing yoga, you can begin now, no matter what age. A yoga class can be designed for all ages and abilities in order to maximise the benefits. It’s never too late to start. Yoga can also benefit people with chronic illnesses or patients recovering from injuries, as well as the average ‘couch potato’.

Granted, there are some traditions in yoga, where chanting and other less physical practices are part and parcel of the routine. However, for much of the practice of yoga that the West knows today, the focus is on posture and breathing. Your teacher may open or close with an ‘Om’ or two, but some entirely leave the more spiritual aspects to one side. If the ‘woo-woo stuff’ doesn’t interest you, either find a class that doesn’t include it, or let your fellow students chant ‘Om’ to their heart’s content, and wait until the fun begins. It’s your practice after all.

How to go the distance during Dry January