The Worshipful Company of Glass Sellers has unveiled Colonel Bill Chesshyre MA as its new Master.

After a long career in the military a second job search led to his appointment as Clerk to the Painter-Stainers’ Company, and there was a parting of the ways after eight successful years. 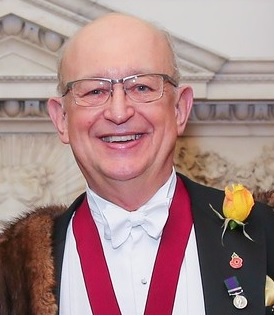 The Gunmakers then took him on for another eight years before retiring him at the age of 70. He was recruited into the Ward of Cheap Club by the late Alderman Anthony Bull and was elected President in 2017.

In 2004 he was invited to join the Livery of the Glass Sellers’ Company by Past Clerk/Past Master Brian Rawles, and has ascended the ranks to become Master.

Bill is married to Bimala, niece of leading Nepalese artist and writer, the late Lain Singh Bangdel KCVO, whom he met when she was serving in Hong Kong as a Captain with Queen Alexandra’s Royal Army Nursing Corps.