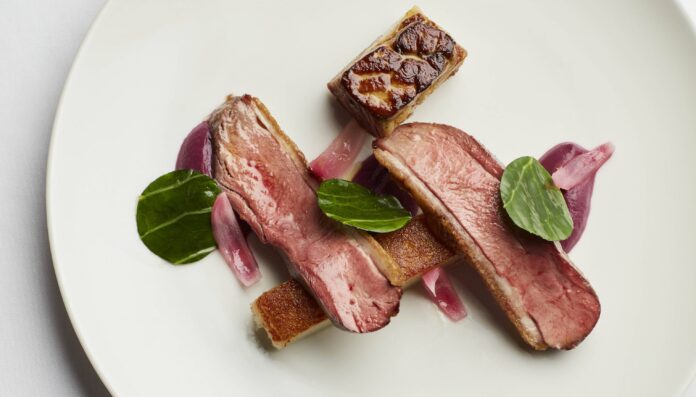 Some things never go out of style. They don’t have to be overworked and reinvented. They need only to be perfectly executed. That’s what Galvin La Chapelle in Spitalfields is all about.

The team take traditional French fine dining, give it a little modern twist, and throw it back at you with flair.

You get the old school grandeur by sitting within the open and airy former girls’ school built back in 1890 but it isn’t all glam and redesigned. The building was derelict for many years, and they don’t cover all the wear and tear up – you see the rafters, old brickwork and the stunning arched windows. They haven’t stripped the space of character, like so many modern dining rooms do.

Service is similar. Friendly, personable but also still of that Michelin-starred quality people have come to expect from Galvin La Chapelle ever since they got the coveted award back in 2011. It’s classy. And oh, so European.

And while you could anticipate this from a Michelin-starred spot in London, the menu did throw us a little. It’s not purely French – they have thrown a few pasta dishes in there as well as a cheeky ceviche. And this does certainly help liven the offerings up. Especially as they are styled in such a French way. By loading them up with all the butter for starters.

Take their signature dish which has been on the menu ever since they opened in 2009 – the Dorset crab lasagne. The warm crab is layered in-between fresh sheets of pasta and mixed in with generous amounts of beurre Nantes.

All this warm buttery goodness is made even richer thanks to the eggy pasta. The layers of flavour match the layered design quite nicely. For mains, we were pretty damn blown away by the Goosnagh duck breast. For one, we don’t think we’ve had such a tender cut of duck before. You could slice into it with a blunt butter knife if you so wished.

Beside this lies their tart fine of endive which comes with shredded duck confit for even more depth and difference. They then add a blood orange sauce and a little foie gras for good measure. We do always feel guilty when eating foie gras but god it tasted good. We’ll be better tomorrow, we promise.

NOW READ: Food & drink masterclasses in the City of London

Another standout came in the form of the grilled Cornish red mullet. The fish itself was simple, letting the mullet just do its thing. But being paired with a fresh lobster ravioli made it all the more exciting.

We would have preferred the ravioli filling to be chunky, letting us crunch down on the lobster flesh, but it had been highly processed. We admired the skill that went into creating such a fine filling but, at times like this, we miss the slightly more rustic method.

The fennel reduction was also a nice touch but the bed of puy lentils didn’t seem to be necessary. We could have done with a root veg puree or something a little lighter. Still, we mopped it all up with their homemade bread, savouring each and every element on the plate.

Thankfully, desserts were just as impressive. We went for the classically luxurious soufflé – flavoured with Yorkshire rhubarb, topped with a little crumble and served with plenty of hot crème anglaise. This was nothing short of outstanding.

The slight tartness of the rhubarb stopped the dish from being overly sweet, while the crème anglaise added some much-loved depth and creaminess to the whole affair. You couldn’t possibly fault this one. definitely order one for yourself. And don’t share a morsel of it.

And, as you are splurging for a decadent meal, you can’t skimp on the wine. Go for the sommelier’s pairings, opting for both French and new-world variations. Finishing things off on a warming brandy just before being thrust back on to the streets is also essential. For Galvin La Chapelle is a proper fine dining oasis on the border of the traditionally minded Square Mile and more creative Shoreditch. It lends well to both of these areas, blending both sentimentalities with such precision.