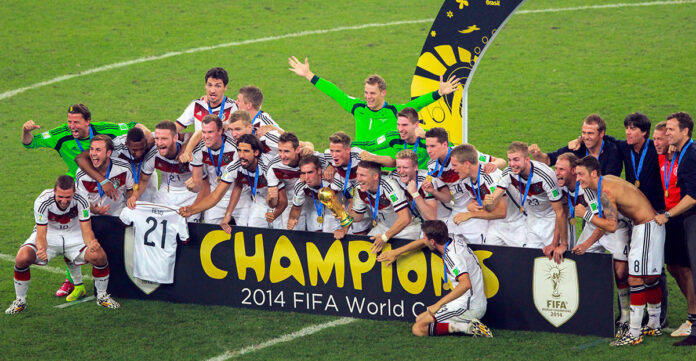 The countdown is on for the FIFA World Cup to kick off in Russia, and with just days until England’s squad takes to the pitch for the first time, many football fans will spend the next few weeks with their eyes glued to their television screens. But how many will get off the sofa for a kickabout afterwards?

Major sporting events are a truly great way to inspire more people to participate in sport at grassroots level.

We saw more people out pounding the pavements after Mo Farah and Jessica Ennis-Hill won gold at the London Olympics in 2012, a spike in the number of cyclists during the Tour de France, and good luck reserving a slot at your local tennis court when Wimbledon rolls around next month.

So the World Cup is a perfect opportunity to get more people, particularly children, engaged in football, which does wonders for both physical and mental wellbeing.

Let’s look at some of the health benefits of playing the world’s most popular sport.

For kids, this type of activity is vital for developing stability muscles in the ankles, knees and hips, which help to control our movements and change direction suddenly.

It is important to develop a strong basis for these muscles early as human beings tend to move more unilaterally as they grow older. We get up, we walk to the train station, we sit down at our desks and we lose that multidirectional movement.

Sports that require players to constantly adjust and adapt, slow down and speed up, will develop and strengthen these muscles to make sure our bodies move efficiently.

Kids also recover quicker than adults, so even if they only become weekend warriors when they’re older, you can always rely on that base layer of fitness and strength.

Of course, football requires strong foot-eye co-ordination and reflexes, but it’s also great for developing co-ordination between the muscles that will help prevent knee and ankle injuries down the track.

If you watch a pro take a penalty in slow-motion, you will see a whole pattern of muscles working; most people don’t realise the amount of upper body and abdominal rotation it takes to make that kick happen. That lack of co-ordination is how a lot of guys get injured playing for fun – their body will move in one direction and leave a knee or an ankle behind, causing ligaments to stretch or tear – so football drills are a great way to build it up.

There’s a great deal to be said for a sport that relies heavily on teamwork to get the job done, and football is a great way for kids to meet new people and learn about working as part of a unit.

Show them that it’s not all about penalty shootouts but the art of teamwork – staying in formation, working together to move the ball up the field, the celebration as the ball sails into the net.

Let’s hope we see plenty of those in Russia and across parks and gardens in London over the next month.

How to beat the January blues and avoid burnout

How to go the distance during Dry January