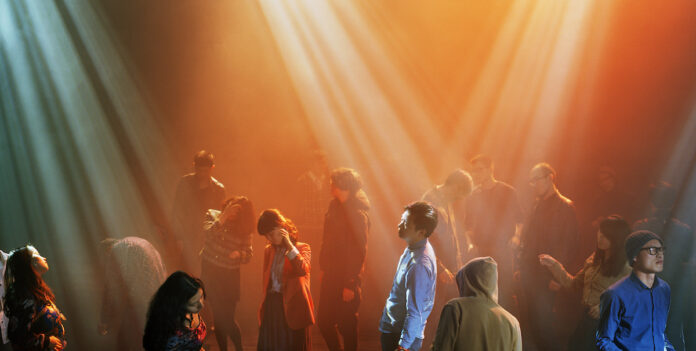 There are stacks of things to see, do and experience in and around the City of London each and every week. So here’s our roundup of the best festivals, exhibitions, films and live music performances for you to get involved with as we embrace Autumn in all its glory.

The London Literature Festival fills the Southbank Centre again this year with acclaimed authors, poets, speakers and collaborators for 11 days of wordy events. The festival also coincides with Half Term week, offering a packed programme of literary events for the family as well as the return of Young Adult Literature Day. Southbank Centre is also excited to present the first London Literature Festival Writers’ Day in partnership with Creative Future, offering a day of free talks, 1:1 agent advice sessions, an exhibition space and networking opportunities all aimed at under-represented writers.
17-27 October
Various Locations at Southbank Centre

Guildhall’s Electronic Music department continues their popular series of masterclasses exploring the recording and production of electronic scores, with a focus this time on sampling techniques. This free masterclass is open to all and suitable for all levels.
17 October, 1pm, free
Milton Court Concert Hall, Silk Street EC2Y 9BH

EXHIBITION / Transformer: The Rebirth of Wonder

This is a massive group show curated by Jefferson Hack. It features the likes of Doug Aitken, Sophia Al-Maria & Victoria Sin, Donna Huanca, Juliana Huxtable, Quentin Lacombe, Lawrence Lek, and Chen Wei (lead image) amongst many others. The exhibition takes its name from a Lawrence Ferlinghetti poem and considers how we can make the world that little bit better. It’s running at the same time as the immersive exhibition ‘Other Spaces’, giving you double the reason to run along to 180 The Strand this autumn. This space is known for putting on some of the most underrated international shows which focus on almighty visual effects. Check them out ASAP!
Until 8 December, free
180 Strand WC2R 1EA

EXHIBITION / Into the Night: Cabarets and Clubs in Modern Art

From London to New York, Paris, Mexico City, Berlin, Vienna, and Ibadan, take an exhilarating journey into the world’s most iconic cabarets, cafés and clubs in modern art, through the lens of pioneering artists from across the world. Be sure to see Trevor Paglen’s new free exhibition From ‘Apple’ to ‘Anomaly’ in The Curve space while your visiting the Barbican Centre.
Ongoing, tickets from £15
Barbican Centre, Silk Street EC2Y 8DS

Scandinavia’s super-orchestra bring their silken strings and luminous woodwind to bear on Strauss and Shostakovich, before joining forces with another giant of Norwegian music, Leif Ove Andsnes. Under its music director, Vasily Petrenko, the Oslo Philharmonic Orchestra has blazed a worldwide reputation, and this programme of Strauss, Grieg and Shostakovich is ideally tailored to its strengths.
22 October, 7.30pm-9.30pm, tickets £15–£56 plus booking fee
Barbican Hall, Silk Street ECY2 8DS

Learn some frightfully good facts about banknotes and the gold boo-llion that lies underground in the vaults. Listen to the ghost story of the Bank Nun (who haunts the Bank’s corridors by night) at 6pm, 7pm and 8pm. Places are limited and allocated on a first-come, first-served basis. Suitable for ages 13 and over.
25 October 5.30pm-9pm, free
Bank of England Museum, Bartholomew Lane EC2R 8AH

ZooNation’s smash-hit sensation Some Like It Hip Hop thrilled audiences and critics when it opened back in 2011. With a nod to Billy Wilder’s classic Some Like It Hot and Shakespeare’s Twelfth Night, it tells a comical tale of love, mistaken identity, crossdressing and revolution, all played out in ZooNation’s trademark style.
23 October until 9 November, tickets £15-£55
Peacock Theatre, Portugal Street WC2A 2HT

Gain an insight into the life of the legendary art collector and socialite at this two-hour talk at the Guildhall Library. She was responsible for bringing some of the best modern artists to Europe all the while  curating a pretty impressive personal collection of her own. The talk may even inspire you to visit her home and museum in Venice!
29 October, 6pm-8pm, tickets £7 plus booking fee
Guildhall Library, Aldermanbury EC2V 7HH

BREXIT PARTY / Jeff Wayne’s The War of The Worlds: The Immersive Experience

For one night only, the steampunk bar at the War of the World Experience will be transformed into the ultimate Halloween venue. Sip No Deal Daiquiris or try the flowing Bo-jito, as you boogie on down to end of the world classics (R.E.M is a must, right?). Drinks prizes will be going to best dressed so costumes are encouraged – from a terrifying Theresa May to a frightening fallen EU star, there are no limitations.
31 October – 2 November, from 7pm
56 Leadenhall Street EC3A 2DX

There’s nothing like a hidden Masonic Temple setting to ramp up the atmosphere in what is already shaping up to be a series of suspense-filled screenings. This Halloween, they’re showing a bona fide horror classic: Alfred Hitchcock’s ‘Psycho’. The £20 ticket includes unlimited popcorn, while the £40 ticket includes a ‘decadent’ Bento Box from the Andaz’s own Miyako Japanese restaurant.
31 October
57 Liverpool Street EC2M 3TH

MUSIC / Once Upon A Time On A Halloween