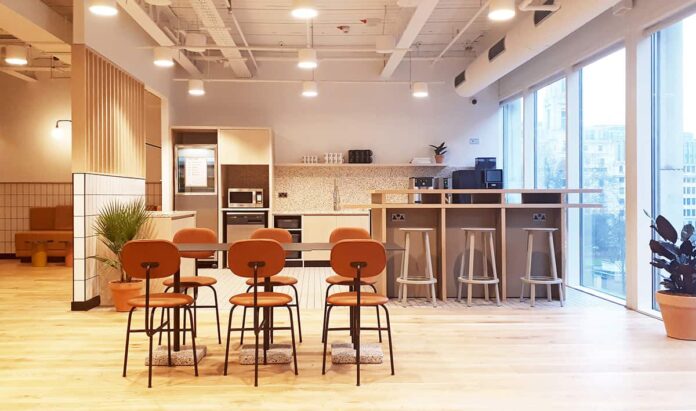 WeWork works. The US co-working start-up is now the largest corporate office occupier in central London, and shows no sign of slowing with a third site in Moorgate opening earlier this month at Finsbury Pavement. But this time, they have stepped up their game.

Along with Shoreditch and City-inspired interiors and the usual networking events and fruit-infused water on tap, WeWork Finsbury Pavement will also be home to Flatiron School: its coding bootcamp that offers members courses in software engineering and web development.

It will be the first school outside the US cohort of WeWork locations for the education arm of the company, which will operate from the seventh floor of the 12-storey building at Finsbury Square.

As well as launching their London campus, WeWork and Flatiron School are also pledging to give over £1million in scholarships to under-represented groups in the UK technology sector during their first year of operation.

The initiative will see the school partnering up with organisations AllBright, Code Bar, and Women Who Code.

“With the acquisition of Flatiron School and the launch of our UK campus, WeWork has found a partner who shares our vision of revolutionising the way things are done – with work and with education – to help people do what they love,” said Eugen Miropolski, WeWork’s Europe managing director.

“For us, London is an ideal location for our first overseas Flatiron School campus, due to its thriving tech start-up scene and wealth of opportunities.”

The Square Mile has proven fertile ground for the company, with its locations in the City alone more than doubling in 2017. Finsbury Pavement is the eighth City location and the 23rd in London.

“WeWork Moorgate, which opened back in July 2015, really proves how successful this area has been for WeWork. It now has over 3,000 members,” a company spokesperson said, adding that the newest addition is already generating “significant interest from a broad mix of potential members, including large corporations”.

The spokesperson said that City WeWork locations have attracted a number of larger companies looking for satellite offices to house select teams and business units.

“Small companies have always wanted to be big, but big companies increasingly want to act like small ones. Corporates love that WeWork is flexible, cost efficient, and gives them access to a creative community.

“But we will always still have freelancers, creatives, and small start-ups coming in as well. We think a community works best when it’s a mix: start-ups, freelancers, small businesses, and corporations all working together in a flexible and shared working environment.”