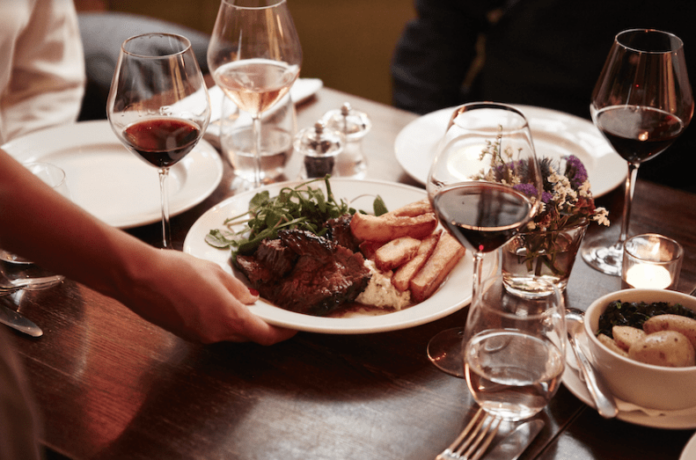 IT has been well over a decade since wine traders Brett Woonton and Charlie Young first opened Vinoteca in Smithfield Market.

It was a fresh, new ‘wine bar and shop’ concept boasting an ever-changing menu of 25 wines by the glass, a few hundred by the bottle, and all available to take home or drink in with paired dishes created from seasonal produce.

A winning formula, by all accounts, that has since snowballed into four more Vinoteca branches in Marylebone, Soho, King’s Cross and Chiswick, not to mention the dozens of other wine-led food ventures providing some stiff competition.

So it’s anybody’s guess why it has taken this entrepreneurial duo 12 years to make the one kilometre journey south to the heart of the Square Mile, arguably the home of the post-work liquid dinner.

Never mind, they’re here now, and occupying a prime position at the entrance to the City’s hot new food hub at the foot of the recently opened Bloomberg building, with the Wednesday night crowds alone enough to suggest it was worth the wait.

The ‘bar-side’ of Vinoteca is packed with suits enjoying a glass or four of something to get them through the rest of the week.

Friendly, efficient staff set each group on their way with ease, expertly manoeuvring both novices and know-it-alls through the carefully curated, character-filled list of wines by-the-glass or the more robust, 200-strong full menu by the bottle categorised by flavour profile and country.

The restaurant side is less busy, but it is early and a fair assumption that those swaying slightly at the bar will be along shortly to line their stomachs for the journey home.

It would be easy to dismiss the food at Vinoteca as just that; fuel to be inhaled strategically so as to consume more of the wine. But that would be a disservice to what is a well-rounded menu that will likely keep diners long after last drinks are called.

Each of the branches is different, with only the bavette – juicy and big on flavour – available at all six. Fans of the Farringdon original will find lighter, more seafood-based mains in the City; cod with lentils, mackerel with greens, and a delicious brill served with dried tomatoes and tiny shrimps that pack a punch. Starters also err on the seafood and vegetarian side, though the salad of rare venison, blue cheese and walnuts is a standout, while a well-oiled burrata with caponata falls slightly flat.

The varied food order brings with it about four differing recommended wine pairings, but a bottle of the Château du Moulin à Vent sees us through the meal nicely.

Research into the 2014 vintage reveals a wine that is ready to enjoy now, but worth the wait for those prepared to keep it in the cellar for a few years. Rather like Vinoteca’s arrival to the City.