It started out as a dry cough on your morning commute. The aches and pains kicked in when you sat down at your desk and, by lunchtime, you can barely swallow. Sounds like tonsillitis, and a course of antibiotics should nip it in the bud; the only problem is your doctor can’t see you until 2pm two days from now, which means at least a couple of days off work right in the middle of a major deadline.

It’s a scenario playing out all too often in workplaces across the Capital, which is why telemedicine firm VideoDoc has identified London as a major market for technology they say could transform office absenteeism and get workers well sooner rather than later.

The Dublin-based company has developed an on-demand GP video platform that allows people to consult with GPs face-to-face via their computer or mobile phones. Launched in 2014, VideoDoc provides telemedical consultation services to more than half of Ireland’s GP practices.

Now VideoDoc has arrived in London, a market that co-founder Mary O’Brien says is ripe for on-demand healthcare. “Telemedicine brings the doctor’s house call into the 21st century,” she explains. 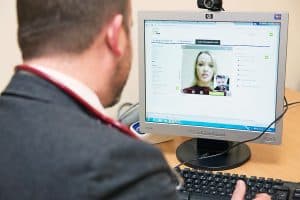 “There are huge advantages for people who work within conventional office hours in a location that’s often some distance from home. “The smart solution means people will no longer have to take time off for GP appointments or waste hours on the end of the phone waiting for slots to become available.”

According to VideoDoc’s research, 70% of Londoners have delayed seeking medical treatment because they were concerned about taking time off work, which Mary says is ironic because that’s also the percentage of illnesses that can be treated via video consultations. The technology is not dissimilar to that of other app-based on-demand services; a patient registers for an account and fills out basic health information, and the reason for their visit.

They will be placed in a queue to see a doctor – either their own, if they are using the platform, or an on-call physician – and connect via video call.  Most consultations take less than 10 minutes, and if a prescription is required the doctor can post it directly to you or your local pharmacy.

Telemedicine has been around in the UK since the early 1990s, however take-up from both patients and GPs has been slow compared with the United States. Mary admits there remains some “trust issues” around telemedicine, and is hoping that connecting people with their existing GPs through the technology will show both users and doctors that it isn’t a threat.

VideoDoc is also targeting the B2B market in the UK, offering white label opportunities for healthcare providers and massive corporate discounts for firms looking to implement the technology as part of employee health and wellbeing programmes. “For employers, investing in the health and wellbeing of their staff will also go a long way in promoting a happier, more engaged and productive workforce – something that should be high on the wish list of every CEO.”