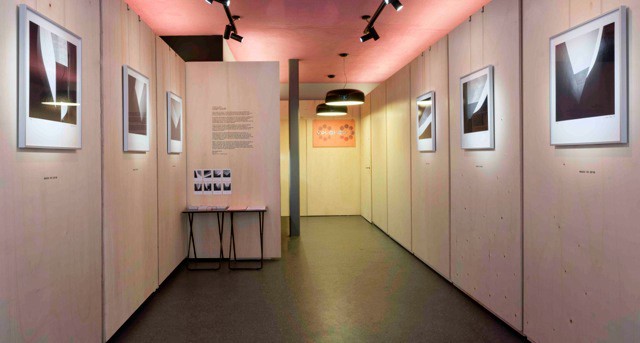 One of the great debates of modern architects is whether their practice constitutes art.

American architect and abstract artist Richard Meier argued that architecture is in fact “the greatest of arts”, while Zaha Hadid’s principal Patrik Schumacher demanded we stop confusing the two arguing: “architects are in charge of the form of the built environment, not its content.”

Smithfield-based architect David Rosenberg is of the latter school of thought: “I think our education allows us to believe that we are artists, that we ‘sculpt space’,” he says.

“That focus doesn’t leave room for the nuts and bolts… the fact that a building has to stand up, be secure, withstand wind and rain.”

But that doesn’t mean the two can’t co-exist peacefully, as they do in his new gallery Velorose off Charterhouse Square.

David has added a commercial gallery to his established architecture practice, displaying architecturally-themed or inspired work in all media, with the aim of championing the built environment as expressed in art.

It emerged through the refurbishment of a long-derelict pub into apartments, which David designed for a client. The site office was going begging, so David moved his practice into the space, and found room to pursue another passion.

The former associate partner to Norman Foster says he always wanted to do more than run an architecture studio.

“A lot of the art that I’ve collected personally over the years has been quite architectural, so that’s really informed the direction of the work.”

His first exhibition featured a series of photos of the Zaha Hadid-designed MAXXI museum in Rome, followed by Party Wall, a series of photographs capturing the structures that stand on the boundary between two properties as part of the London Festival of Architecture.

Velorose’s third exhibition; a series of ceramics and fabric sketches by William Martin that launches next week draws from Antoni Gaudi’s catenary arches, thick chains in porcelain, and stone and elaborate pots that explore themes of masculinity and colonial history.

The South African British ceramicist has also worked in response to the space itself, which is small but cleverly designed (as one might expect) with wall panels that open out to reveal shelving and to serve as room dividers and additional display space.

His work will also be displayed in one of the building’s flats because “it’s quite a jump from seeing art in a gallery to in your home,” David points out. One of two ‘offshoot’ exhibitions (work will also be installed in Christ Church Highbury), the in-home exhibition is part of Velorose’s overall aims to make art more accessible.

“I think people are scared of art,” David says. “They’ll say ‘I don’t know anything about it’ and sort of shut down, so part of what we’re trying to achieve is to open some minds.”

Velorose is in a good position to do so; virtually next to the new Charterhouse museum and a stone’s throw from the Barbican Centre and soon-to-be Museum of London site at Smithfields, a developing ‘Cultural Quarter’ David says he is excited to be part of.

“People are beginning to pop by en route to the Barbican; they’ll often catch a glimpse of a display and wander in asking ‘what are you?’”

“We are art meets architecture; gallery at the front, design studio at the back, but there’s a lot of crossover in between and that seems to be a pretty comfortable fit.”

William Martin’s OBJECT / IMAGE is on display at Velorose Gallery from 30 June to 12 August. 1b Charterhouse Square EC1M 6EE