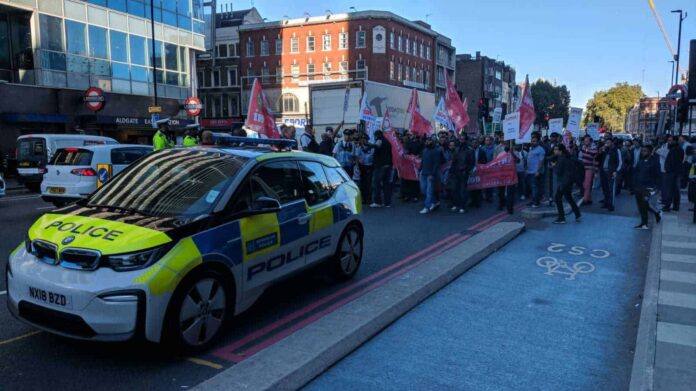 City streets were brought to a standstill on Tuesday afternoon as Uber drivers gathered outside the company’s headquarters in Aldgate Tower to protest pay and working conditions.

The demonstration at the intersection of Aldgate High Street and Leman Street at 1pm was part of a 24-hour national strike organised by the United Private Hire Drivers (UPHD), with simultaneous action outside the taxi app company’s offices in London, Birmingham and Nottingham.

Police shut down parts of Aldgate High Street and Whitechapel Road for hours as drivers chanted “Shame on Uber” and urged the public to boycott the service over what it describes as unfair deactivations of drivers, an increase in fares to £2 per mile from a current rate of £1.25 in London, and a 10% reduction in commissions paid by drivers.

The union is calling for the swift application of a 2016 tribunal judgment that rejected Uber’s classification of a group of drivers as independent contractors.

We’ve called a 24 hour Uber driver strike from 1pm October 9th. The app is the picket line so we’re asking passengers and customers to not cross it by using it. #Ustrike

Last month more than 100 Uber Eats drivers blocked the same intersection to protest a new pay structure that reduced the minimum delivery fee and minimum order, down to £3.50.